Outlining: one writer’s approach
A project in progress: translating “La Patissière des...
Pulling The Lever
Weird bread
Peter’s Isolation Goulasch
Business As (un)Usual
Not Really Hungarian Pork Chops
At the Ebooks Direct store: everything 50% off...
Playing with Terragen: the Jungfrau Massif
At the Ebooks Direct “office”: A chance meeting
CrossingsCon 2021: We’ve got dates!
Handling Twitter
2020 Hugo Nomination Eligibility: the Tale of the...
From the (theoretically forthcoming) CUISINES AND FOODS OF...
From the Winter Solstice, 2009: “Dancing in the...
Crossing the streams
BooksDaz 3DEbooks DirectGraphic and plastic artsProcessTerragen

The revised New Millennium Editions of the “primary continuity” Young Wizards novels started coming out at our Ebooks Direct store in 2011.* The project took a while to complete, in between other work; and as sometimes happens in a prolonged release situation like this, thematically and in look-and-feel the covers aren’t very unified. Slowly it became obvious that something was going to have to be done about this.

As it happens, along the way — as part of an ongoing fascination with digital art — I started picking up tools that were going to make this process easier. And slowly (because the learning curve is kind of high on these tools and I also have other work to be doing) I started acquiring the expertise to use them effectively.

So the process of updating the covers has begun. (Along with the business of grooming out any typos that have turned up / been reported in the texts, and updating the ebook “interiors” to more modern / better formatted versions.) People on my Tumblr and elsewhere have occasionally inquired in a general way about what’s involved with this kind of work: so I thought I’d do a post about it.

The first and more complex of the two tools is Terragen: specifically, Terragen 3 at the moment (though I look forward to updating to T4 when I have the cash to spare.) Terragen is a cutting-edge landscape- and exteriors-production tool, widely used in the film and TV industries to produce both still work and animation. As an example, here’s the 100th anniversary Paramount film logo done using Terragen. The beautiful clouds and sky are something of a diagnostic: atmosphere work is one of the places where Terragen really shines.

I’ve been playing around with Terragen for the guts of a decade now, working hard to keep up as its newer versions grow in complexity and power. It’s capable of producing really beautiful results if you know what you’re doing. (That being the tough part. It’s equally possible to spend truly staggering amounts of time running down blind alleys if you’re not careful. Fortunately there are forums at Planetside full of kindly people who’re very willing to help struggling newbies as long as they demonstrate their willingness to go as far as they can on their own before asking for help.)

The other tool that’s proven most helpful, for figures, clothes, interiors and some kinds of exteriors, has been Daz 3D. I initially spent a fair amount of time trying to get to grips with its main rival, Poser, but found its learning curve annoying and its documentation unnecessarily obscure, so that even doing quite simple things like putting clothes on a figure were (for me at least) something like torture. However, when I started using Daz’s user interface, Daz Studio, I found it much easier to use, and happily started the gradual process of acquiring the resources I was going to need for cover work. (The interface itself is free: sets, specific figures, and items of clothing have to be purchased.)

Teamed up, these two resources can produce quite lovely results. And they make producing covers a lot easier for those of us artistically-challenged types who can see art perfectly well in our heads but can NOT draw to save our lives.

Here’s a brief overview of the process involved in the re-covering.

I’m presently working on Wizard’s Holiday because of all the covers it needs the least work… relatively speaking. (For those of you not familiar with the work or the series: two young wizards are sent to what seems like a utopian planet on what initially appears to be a cultural exchange holiday, but turns out to be rather more complicated.)

For the “Nita version” of the cover (because there’ll be a “Kit version” as well, showing a different scene) I still like the basic concept: one of our primary protagonists relaxing on a beach on Alaalu, a mostly-watery planet halfway across the galaxy, enjoying the extravagant view of the Galactic core from much closer in than we are. The initial execution wasn’t completely awful, but it suffered from the fact that (a) my water management skills in Terragen were still developing and (b) I was still using Poser and could not get Nita’s damn bathing suit onto her. (We’ve had problems of that kind before, but that’s another story.)  So she appears only as a silhouette, as you can see below… 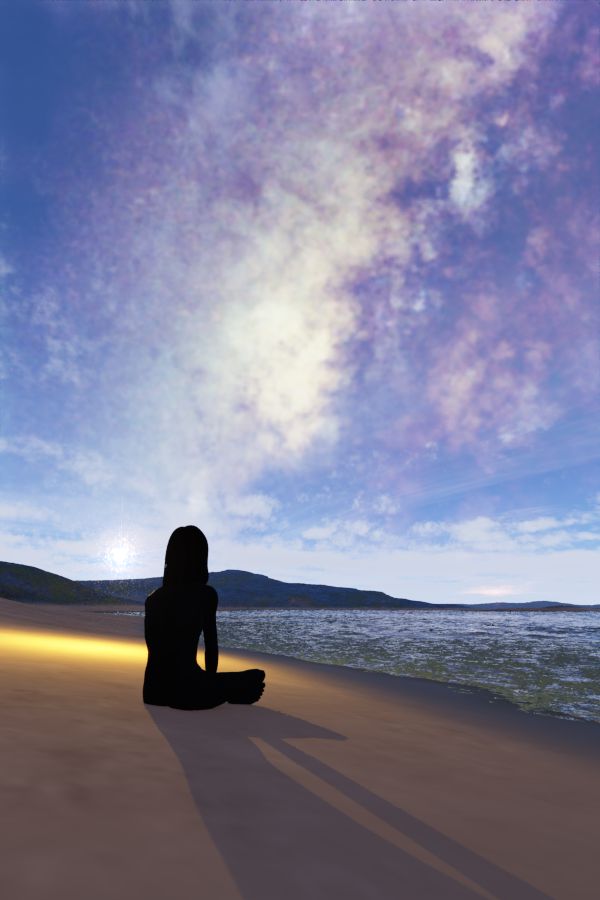 So… I was up against the edge of my technical-ability envelope there. But I can do better than that now. Among various issues that also need to be handled is that a far higher resolution is required nowadays for ebook cover images.  (Amazon, for example, wants ebook cover images that are at least 2400 pixels on their long side.) With increased size comes increased detail; and  a decent image really needs to have more of that than the one above does.

So. First to Daz Studio, to (re)create Nita’s figure. At the moment I’m using a slight variation on a figure called Teen Josie 7. (Don’t get me started on the character makeup shown in the product thumbnails. Daz is a hotbed of the Male Gaze.) 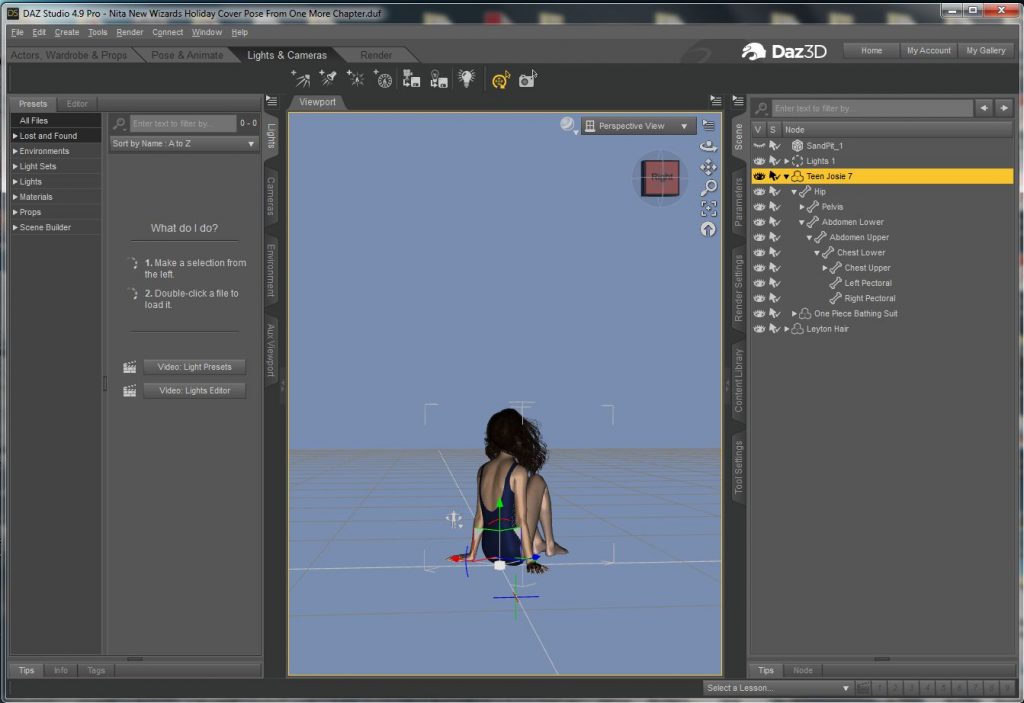 Working with Daz can closely resemble playing with paper dolls: you start with a basic figure that you then fit skin, hair, clothes and accessories to. Additionally you can either pose the character yourself, or buy pose packages online. Sometimes a character comes with a set of basic poses. In this case I used a “canned” pose that came with a different character based on the Teen Josie figure. I’ll probably change it to something more relaxed / casual — for now, this is acting as a placeholder.

Daz Studio has limitations that make it not so great for large-scale landscape work or landscapes that need both depth and detail. There are some brilliant workarounds available, but your “set” is inevitably smaller than the kind of spaces you can create in Terragen. So for me to produce a beach scene with the kind of look and detail I want for this cover, Nita’s figure will have to be exported as a Wavefront-format “object” file and then imported into a landscape in Terragen and positioned there. (This file will also then have to be run through a useful program called Poseray that does something or other magical to enable the textures applied to skin, clothing, etc in Daz Studio to follow the character correctly into Terragen. Don’t ask me to get technical about this because I don’t understand it in the slightest.)

Having done the necessary Poseray jiggery-pokery to Nita, I’m now ready to move on to Terragen. One of my problems — the too-simple beach and water — has already been solved (while doing other work) by the acquisition from Terragen’s lovely New World Digital Art file store of Beach v3.0, an add-on package from an artist who goes by the handle Dune. “Beach by Dune” provides you with a beautifully detailed beach full of rocks, salt grass, wet sand, and extremely nice water.

Not that it looks like it at the moment on the Terragen dashboard, but never mind. The window you see here renders quick and rough so that the artist can get a general idea of what’s going on. The more detail you want in a render, the more computing power it takes, and the longer it takes… so if you’re working with a (whisper it) rather senior machine like mine, you don’t waste time on unnecessary renders. 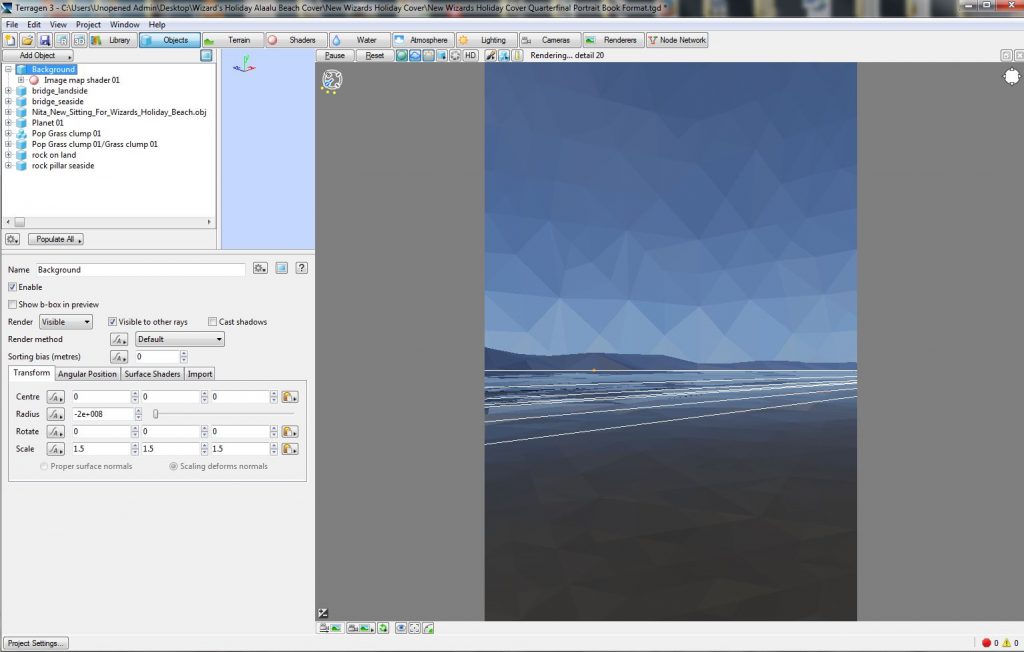 Doesn’t look like much at the moment, but trust me, it gets better. This render isn’t detailed enough to even begin hinting at the lovely ripples in the water and the little waves sliding up the beach.

Now to position Nita. I know in a general way where I want her, so all I have to do is use the dash image to determine the coordinates, load her figure and paste the coords in. A little wiggling and rotating and she’s sorted. 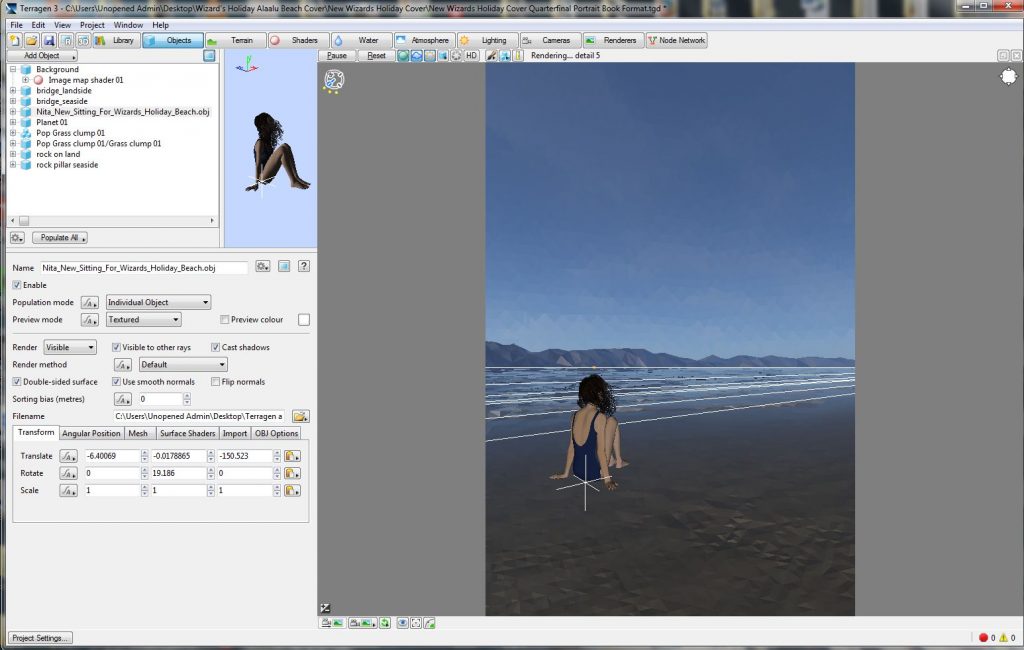 Now for the sky. The “galaxy” image is one of numerous gorgeous images to be found online that show the core region of the Milky Way as seen from Earth. (I think this one might be from Hubble: I have to check.) Once most other things about the master image are sorted out, this background image will be processed separately to remove a fair number of the stars at the edges of the image, which normally wouldn’t be bright enough to show in a twilight sky. For the moment I’m using the raw image as is, for positioning purposes, but before it’s right for the final cover I’d say there’ll be at least five or ten more hours of work spent on just that element of this image, if I’m any good at estimating these things.

Terragen allows such additions to a sky scene by making it possible to project them against a distant virtual surface. This image is being projected onto the virtual sky through the rendering camera. (If I told you how long it took me to work out how to do this successfully it would just be an embarrassment, so let’s not go there.) 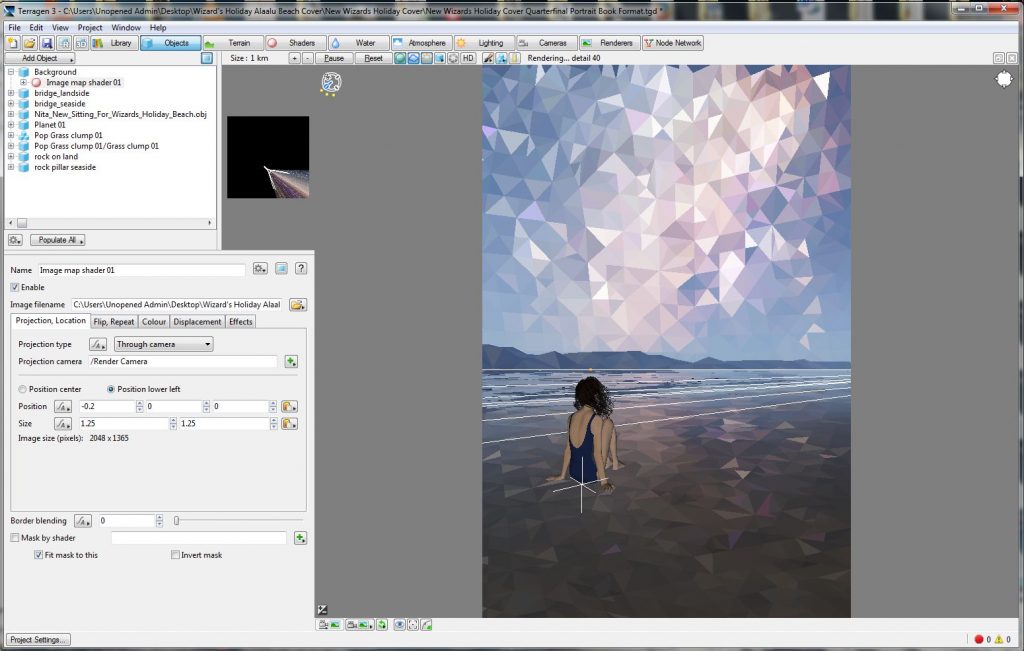 One final thing that needs to be added to this render is the radiance of the little wizardlight Nita has created to follow her around so she won’t trip over stuff on the way back to the alien family’s home that she and Kit are visiting. This panel of the dash will also show something I haven’t bothered boring you with: the six other light sources in this scene, all of which have to be tweaked and twiddled until they’re all in balance for the desired look of the scene. Don’t even think about asking me how long this can take. 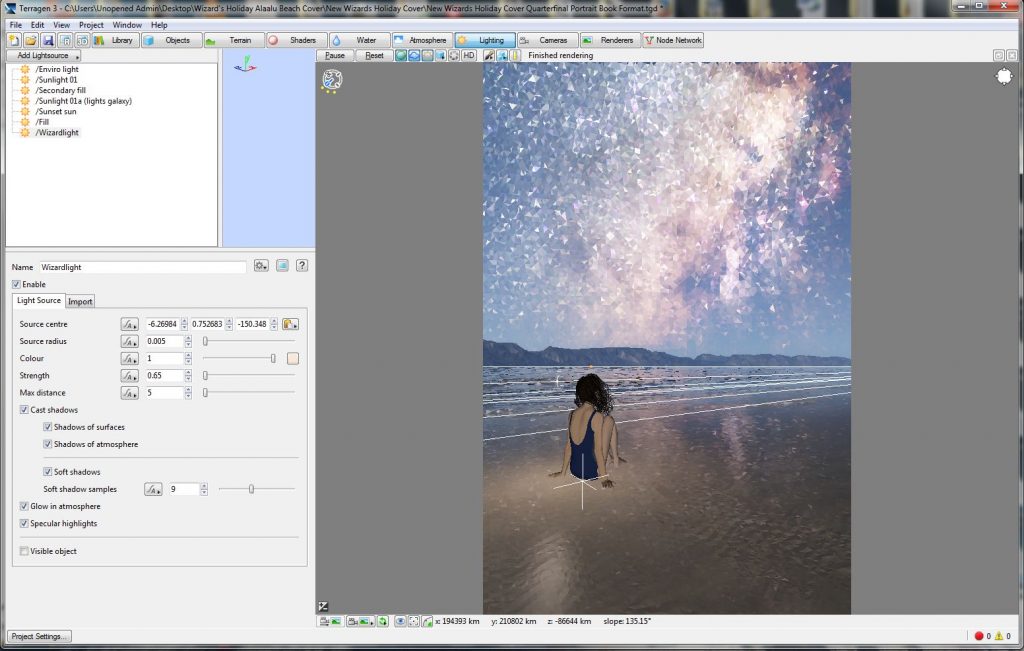 The wizardlight itself will be added “in post” as a little sparkly lens flare in Corel Photopaint, as I like the effect I get there better than the one that would appear in Terragen if I toggled the “Visible object” option on for this light.

So, the rough doesn’t look too bad. Hit render, and after I do that one little bit of post for the wizardlight, this is what we get: 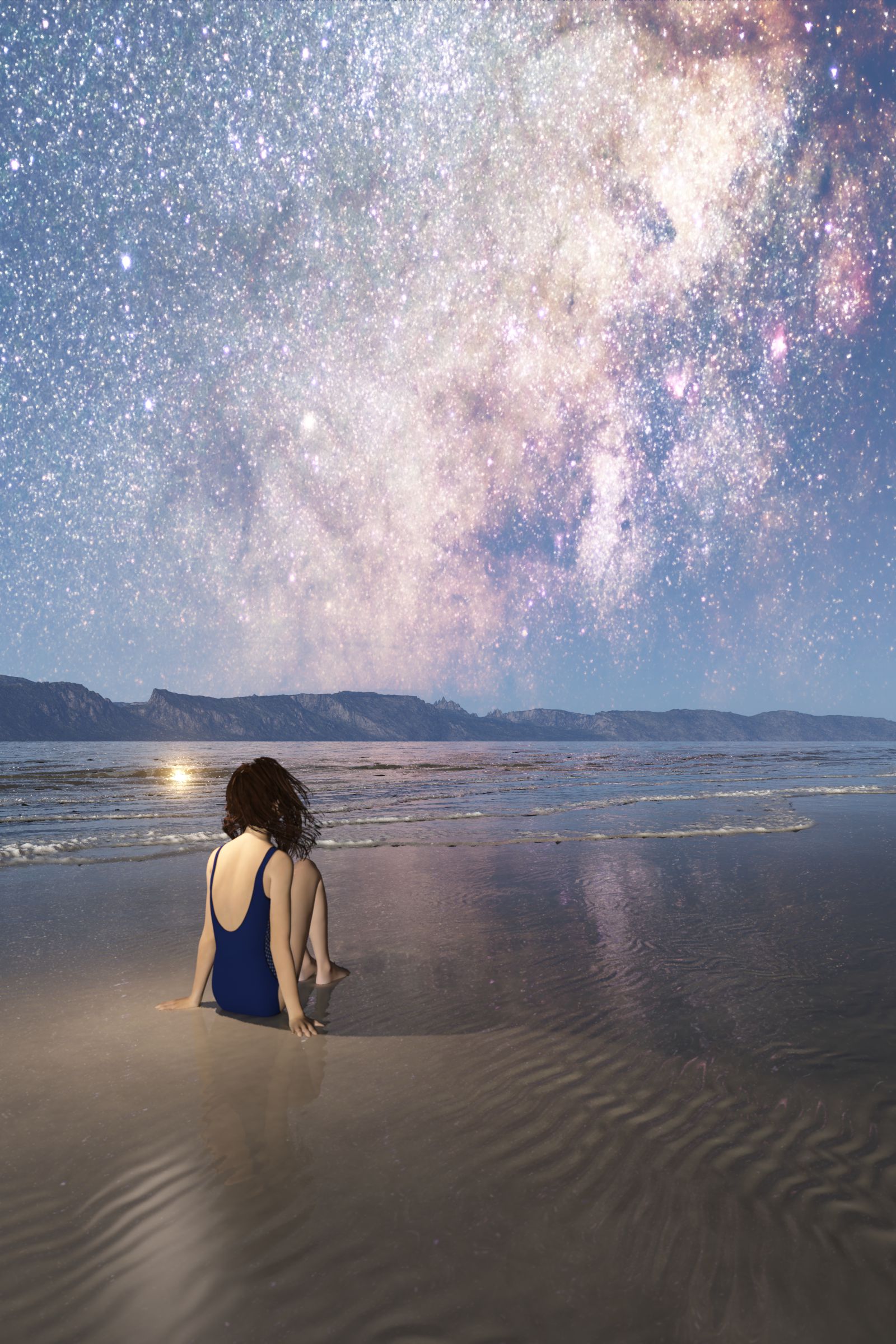 …So the basics are there: the image as I saw it in my head, and plenty of room for cover text top and bottom. But I can still see ten or fifteen niggly things that need to be dealt with.

And when this one’s finished, all I have to do is the same thing eight more times. In images of (in most cases) far greater complexity.

Anyway, those of you who’ve been asking where the new covers are? Now you know why it may take a little while. Till the end of the year, anyway.

But I think it’ll be worth it…

*For a detailed discussion of the rationale behind the revisions, check this post.