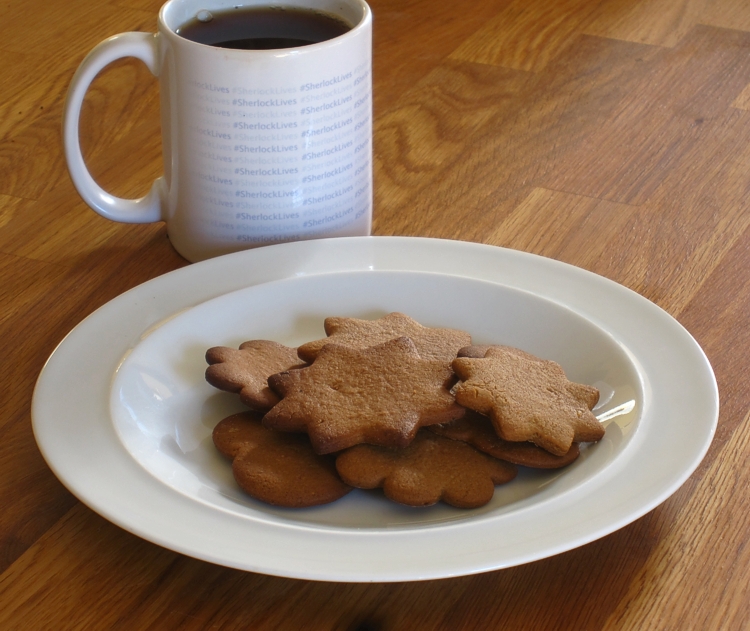 Schwarzwälder kirschtorte is named for the Schwarzwald or Black Forest region in southeastern Germany, so it’s often known outside the German-speaking countries as “Black Forest Cherry Cake” or “Black Forest Gateau”. This cake is possibly one of the most famous of German desserts… which is interesting when one considers that it (or the inspiration for it) may actually have come from Switzerland. Certainly the kirschwasser* or cherry firewater on which the modern cake is based came originally from the land around the central Swiss lakes, a region still famous for it and home to great kirsch brands such as Etter and Dettling. In any case, the spirit wandered northward to the Rhine Valley and the neighboring Black Forest, where it started to be manufactured fairly widely in the mid- to late 1800’s. 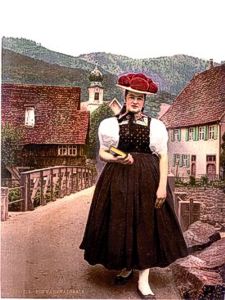 The ancestors of the cake we now know started emerging during this period. Desserts involving cooked cherries, kirsch, and cream or whipped cream were well known in the late 1800’s. Around the turn of the century, the first known kirschtorte appeared near Zug in Switzerland, where kirsch was distilled from the famous Zuger sour cherries. It was probably just a matter of time before someone combined the cake with the cherries, the cream and the kirsch. There might even have been a visual component involved: some writers suggest that the look of the cake is a sort of visual pun on the traditional costume of country girls in some parts of the Black Forest — reflecting their black or dark brown skirts, their white blouses, and their traditional hats covered with large cherry-red woolen bobbles.

Maybe, maybe not. What we do know is that the famous confectioner Josef Keller (1887-1981) claimed to have invented the modern-style kirschtorte in 1915 at the Café Agner in Bad Godesberg, near Bonn… though the claim was never verified. Whether he did invent it or not, the cake appears in written recipes for the first time in the mid-1930s, turning up in 13th place on a list of favorite German cakes in 1949. Its popularity in Germany grew quickly and steadily after that, and it’s during this period that the kirschtorte starts appearing off its home turf, particularly in Britain.

There the new arrival was unfortunately treated very badly. Normally the first things it lost were the kirsch — since this would have been an exotic and expensive commodity in the UK until a couple of decades ago — and its name, which was quickly anglicized into Black Forest cake / torte / gateau. One by one the cake’s other sterling attributes began to fall away as it was made by more and more people who had no idea what the original recipe was supposed to look like. In this sadly reduced form it became a mainstay of British bad-restaurant cuisine during the period described in Simon Hopkinson’s and Lindsey Bareham’s dryly funny UK food history-cum-cookbook The Prawn Cocktail Years,

and this seems to be the cake which has been exported to large portions of North America.

Fortunately the non-ruined version of Schwarzwälder kirschtorte still thrives on its home ground, where the baking industry works under regulations that require a kirschtorte to be made according to a basic set of guidelines. The rules define it as either “a cake made with Kirschwasser and whipped cream or with Kirschwasser and buttercream, or a combination of the two” — so without the kirsch, the cake isn’t genuine. The presence of fruit is actually considered secondary to the presence of the kirsch, the flavor of which has to be clearly apparent. The layers — of a light Viennese cake or sponge — must contain at least 3% cocoa or chocolate (though there can be more), and the topping must be of either buttercream or whipped cream, and garnished with chocolate.

But inside those guidelines, naturally there’s a fair amount of discussion among interested bakers about the fine points of cake construction technique and secondary ingredients. Slice the layers from a single cake, or bake them separately? Cherry compote or whole cherries in the filling? Add a shortcrust-pastry base and use sponge cake or Viennese cake in only the upper layers? The discussion goes on.** But regardless of the quibbling of the experts, Schwarzwälder kirschtorte remains one of Germany’s favorite cakes, if not the favorite, often known as the “Queen of Cakes”. It appears in good bakeries all over the three German-speaking central European countries, and the Todtnauer holiday region in the Black Forest sponsors an annual Schwarzwalder Kirschtorte festival.

Our recipe is an adaptation of one which has been making the rounds on the Net since the first days of online recipe exchange, though its source is uncertain due to its attribution having been stripped off long ago. This recipe uses both buttercream and whipped cream, and also follows the bake-the-layers-separately routine. This is a little more work than baking just one layer and slicing it — but it seems a good way to keep the kirsch evenly distributed, rather than making it easier for it to leak out of the upper layers and pool in the cake’s bottom. 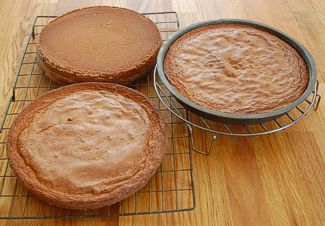 The three baked layers: they’ll fall a little after baking
to about 3/4 inch thick

A couple of notes before starting: 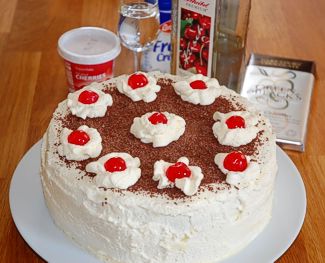 The final result after the whipped cream topping goes on

FOR THE CAKE: Beat eggs, sugar, and vanilla together until thick and fluffy, about 10 minutes. Alternately fold chocolate and flour into the egg mixture, ending with flour. Pour the batter into 3 8-inch cake pans that have been well greased and floured. (Do not use oil to grease the pans: use butter or Crisco or a similar solid fat. If you use oil, the layers will probably stick to the pans. Also: make sure you do the greasing and flouring even if you have nonstick pans.)

Bake the layers in a preheated 350 degree F. oven for 10 to 15 minutes or until a cake tester inserted in the center comes out clean. Cool cakes in pans for 5 minutes; then carefully turn out on racks and allow to cool completely.

FOR THE SYRUP: Make syrup by mixing together sugar and water and boiling for 5 minutes. When syrup has cooled, stir in kirsch. Prick the cake layers and pour syrup over all 3 layers.

FOR THE FILLING: To make the butter-cream filling, beat together sugar and butter until well blended. Add egg yolk; beat until light and fluffy, about 3 to 5 minutes. Fold in Kirsch.

CAKE ASSEMBLY: To assemble cake, place 1 layer on a cake plate. Spread with butter cream filling. Using 3/4 cup of the cherries, which have been patted dry, drop cherries evenly over cream. Place second layer on cake. Repeat. Place third layer on top. Fold 2 tablespoons confectioners’ sugar into the whipped cream. Cover the sides and top of the cake with whipped cream.

Decorate top of cake with remaining 1/2 cup cherries. Grated chocolate is perfectly acceptable as a topping, but if you prefer to make chocolate curls from a chocolate bar, shave them off the bar (at room temperature) with a vegetable peeler. Refrigerate the curls until ready to use. Press the chocolate curls on sides of cake; sprinkle a few on the top. Chill the cake until serving time. Afterwards, because of the cream, keep the cake in the fridge until it’s finished.

*Just a quick note here to avoid confusion: kirschwasser is not cherry brandy, or any kind of cherry liqueur. It’s not a sweet spirit at all. You could describe it as a schnapps in the original sense of the word — nothing like the sweet “schnapps” concoctions of more recent times.

**There’s also a Swedish variant in which all the layers are meringue, but this one seems to drop out the kirsch entirely, so it’s not really a Black Forest cherry cake regardless of its name.

Disclosure: I’ve ganked this recipe from its home at EuropeanCuisines.com because I put it there to begin with, and I bloody well feel like it. 🙂