I have a soft spot for this particular cookie (as this post from some years back should probably make plain). The other evening I got the yen to make some of these, and ran into a problem. We were out of potato flour.

On reflection it seems extremely strange that in Ireland it should be so hard to find potato flour. (And don’t get me started about onion powder. Garlic powder, no problem, there’s lots of it around here, but onion powder is unfindable. And why should that be?! No answers yet.) The only source for potato flour (for me, anyway) is one or the other of the two big Asian supermarkets up in central Dublin. But anyway, there I was wondering where that last package of potato flour had gone (answer:  this German dumpling recipe) and the cookies were not going to happen.

Except that then an idea occurred. We did have some rice flour, which I picked up a month or two back with an eye to testing out some gluten-free baking recipes. Might that do the trick? It was worth a try.

The recipe I normally use as the closest approach to the original Brown Edge Wafer that Nabisco used to make is this one from Cookie Madness, based on a recipe from the potato flour packaging. So i made the recipe as per instructions, with only one change: swapping in a cup of rice flour for the cup of potato flour.

It works perfectly. Not being able to do a side-by-side bake and not having anything to rely on for assessment but my own taste buds, I couldn’t detect any significant difference in flavor between the potato-flour and rice-flour versions. So if you too are out of potato flour, this is a different way to go.

Having the raw materials in sufficient supply also gave me a chance to do an experiment I’d been thinking about. The original Nabisco Brown Edge Wafers were quite thin (looking a lot like these Marjoram butter cookies at SheWearsManyHats.com). Ideally I wanted to get my cookies to come out more like these: more wafer-y.

The ball-rolling-and-flattening technique of the original recipe works well enough, but doesn’t produce that thin a cookie. (Also if the dough is too soft the flattening turns into a real chore: it gets stuck to whatever does the flattening, and various strategies attempted to defeat this — flouring or sugaring the glass used to do the flattening — have proven only occasionally successful.)

As I considered the cookie recipe, I started wondering whether it would be possible to treat these as a refrigerator cookie. I.e., make the cookie dough into rolls, chill it, and slice it. Maybe, I thought, if  sliced thin enough, the wafers would come out flatter when they spread.

So I made a second batch of the dough and took a run at this. It takes a bit of extra work. Some people might prefer this approach: it’s possible, I think, that freezing the rolls and cracking them out when you wanted cookies might work. (Sigh. Another experiment…)

The problem is that the dough, when initially ready to bake, is very light delicate. So the thing to do is refrigerate it for an hour or so before even attempting the roll-making part of the operation.

Having chilled it, I laid down some baking parchment and dropped some fat spoonfuls onto it in a line. These I rolled up fairly gently and put away to chill again. 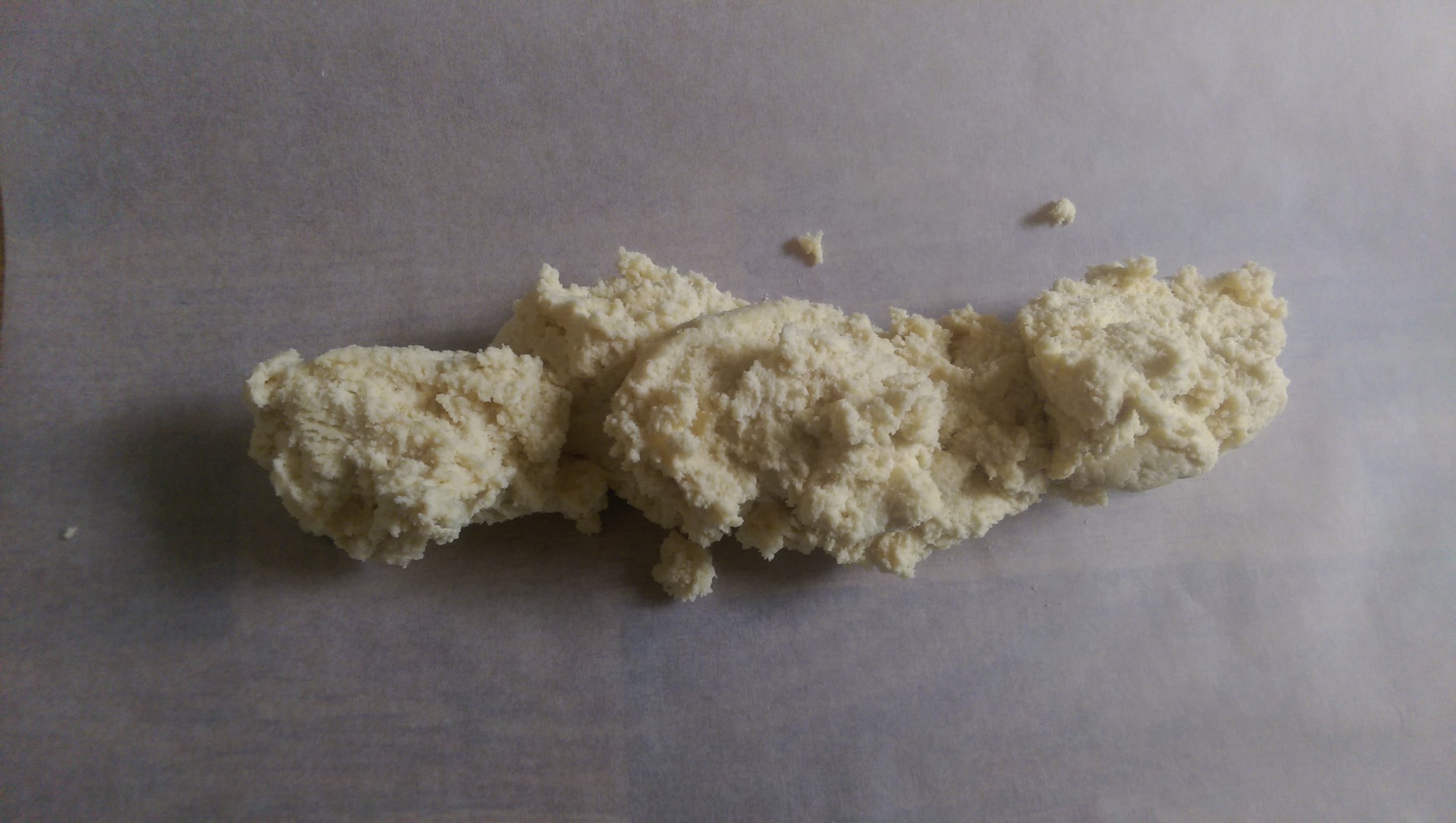 Once the three rolls made this way were good and cold, I took them out of the fridge and rolled them until they were genuinely round. Then I let them chill some more. 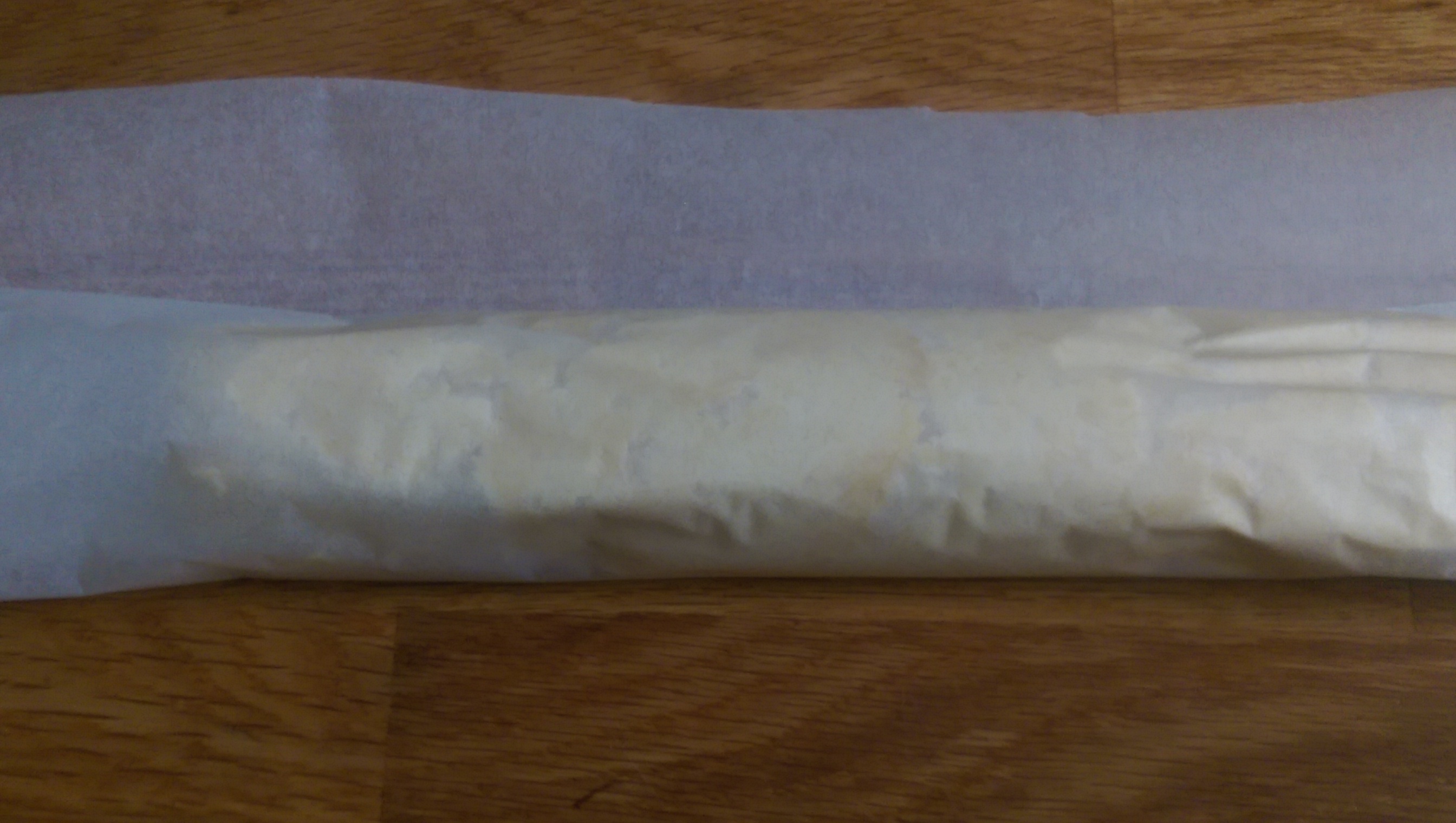 When ready to bake, I put the first of them in the freezer for about twenty minutes while preheating the oven, and prepared the cookie sheet.

With the roll well firmed by its time in the freezer, I sliced (aiming for slices about 1/4 inch thick). The slices, as seems inevitable, flattened on the bottom side while being sliced. They could be pinched back into shape by hand once on the cookie sheet, but I didn’t bother: this whole operation was more a proof of concept than anything else. 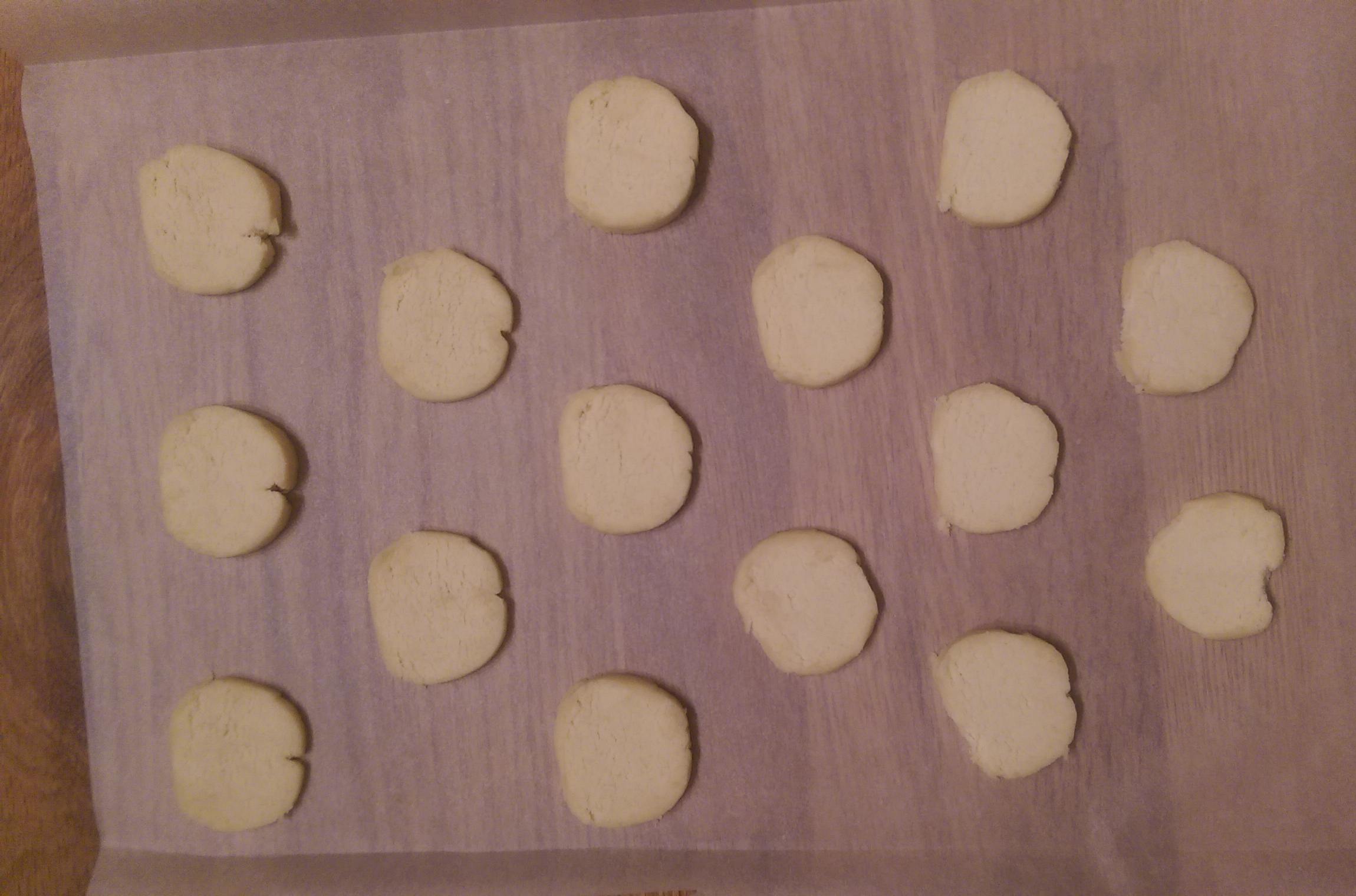 Result: The ones I baked this way did not flatten any further. They also kept a bit of the edge of the original slicing. So in terms of producing a more waferlike cookie, this approach doesn’t work. (Though once again the flavor was just fine.) 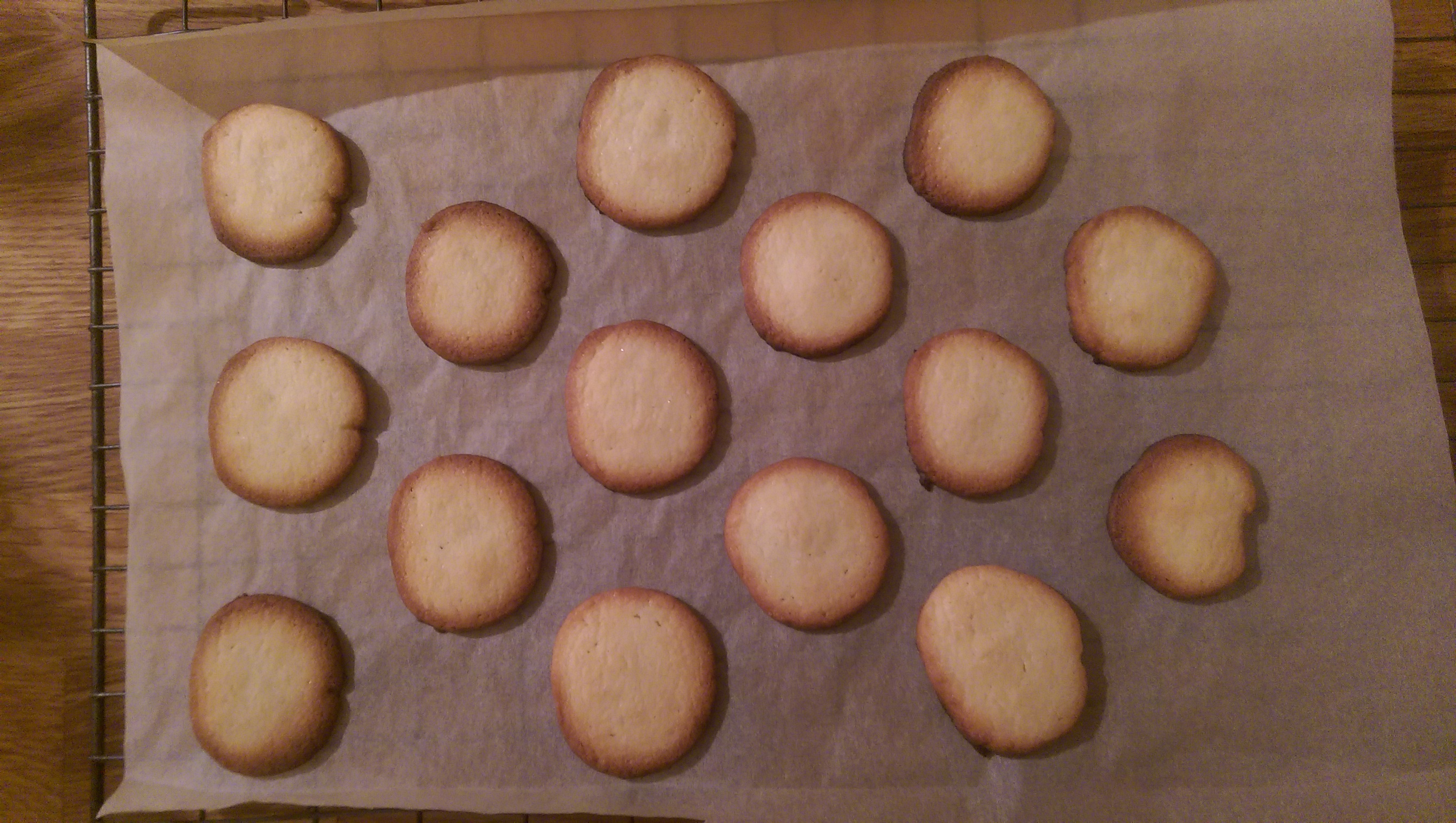 This leaves me thinking that a more useful approach would be a more liquid dough/batter. Another egg in the mix, perhaps? Maybe even a little lemon juice? (I used lemon essence and lemon oil in the second batch instead of vanilla. This was a really good flavor, by the way.)

So this is something to think about for next time. Also: that marjoram butter cookie recipe: egg whites… Hmm.

(Also, per that afterthought: I just ran into this recipe, which calls for egg white rather than whole eggs. The amounts described would seem to kick the recipe’s liquid content up, so this is worth looking into. Another day, perhaps…)