What part of the cow does corned beef come from 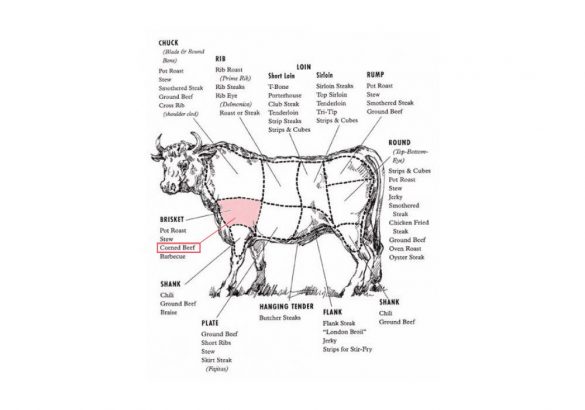 (ETA: This post duplicates an article at our household’s main food site (EuropeanCuisines.com) and appears here as a replacement for a blog post of 2006.)

Corned beef is usually made from the brisket cut above the cow’s foreleg (indicated above). In England and Ireland it’s also sometimes made from the silverside cut (a UK/Irish cut located under the rump, equivalent to part of the US “round”).

Both brisket and silverside are tough cuts requiring either long, slow cooking, or pickling in brine, or both — hence their use in corned beef. See this article for lots more background on corned beef, including the oldest historical info.

Please note that while there are urban myths suggesting that corned beef comes from — let’s put this delicately — the “lady parts” of a cow, these are untrue. Corned beef is a muscle meat, not an organ meat, and anybody who tells you otherwise is just trying to gross you out.

Questions we get a lot:

Is corned beef Irish? Yes. People here started making it around 800 AD, and even wrote poems about it.

Is corned beef and cabbage Irish? No. CB&C is an Irish-American dish invented when previous centuries’ Irish emigrants to North America were trying to develop a substitute for one of their favorite dishes from home, boiled bacon and cabbage. (They were having trouble getting the brined pork that the dish is based on.)

But corned beef and cabbage has never really caught on in Ireland, and hardly anyone born here eats it. It’s usually seen as poor people’s food — or as something to feed to the tourists who keep on demanding it, thinking it’s traditionally Irish. The above article will tell you more about that, too. (Secondary to the main article: once again I checked the supermarket to see if I was possibly mistaken about this. And once again I found the usual result: three packages of corned beef, eighty packages of assorted pork and boiling bacon.) One note, though: the way Irish people usually eat corned beef these days, when they eat it at all, is in sandwiches.

If you’d like to see what Irish people really eat these days, please check this page for some background. And if your heart is set on corned beef and cabbage anyway, take a look at the website that’s now home to our Irish desserts: RealIrishDesserts.com. I particularly recommend Irish Coffee cake and the Baileys marble cheesecake. (OM NOM NOM NOM.)

You might also like Peter’s (Irish) Mum’s soda bread recipe, which frankly is the best on the Web. (And I’m not just saying that because she was my mother-in-law. She was an artist with the stuff, having been born here just past the turn of the last century, and she knew how it should really be made.)

"The Big Meow" Chapter One: access info has gone out

Two quotes for "the day that's in it"