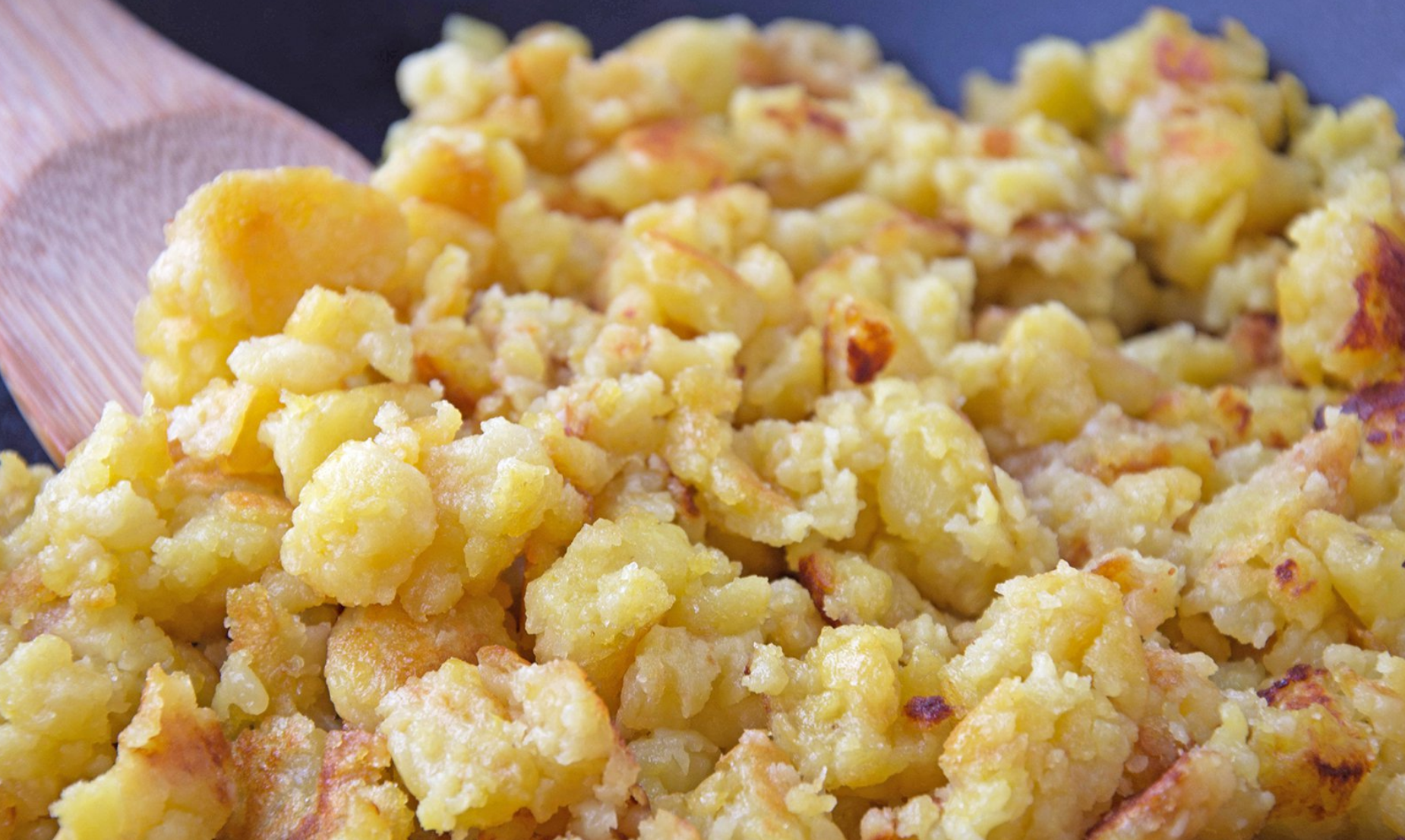 It’s a country dish; a poor people’s dish; a farmer’s hasty breakfast or stopgap luncheon. And (to those who know about it) it instantly recalls the remote Alpine region where it was invented, and where it’s uniquely served and loved. Maluns is the iconic and indispensable potato-based comfort food of people from Canton Graubünden in Switzerland, and Graubündners will travel miles to eat it.

This is one of my favorite Swiss-originated foods. I go out of my way to eat it whenever business takes me there—because it’s a pain in the butt to make, labor-intensive and time-consuming. But sometimes, when I get to feeling—not homesick: how can you be homesick for someplace that’s not home?—but feeling like I wish I could be in Switzerland, even virtually and just for an hour or two, I make maluns at home.

The dish has the Alps in its bones. It speaks, like so many of the local specialties, of a place where the local lifestyle was once very difficult: where you made the best of what you had when the snows set in hard, or spring was taking forever to arrive. It’s easy to imagine some pensive cook in a tiny chalet, a few centuries back, staring at the last few leftover boiled potatoes and a little flour, and a firkin of the local butter or the lard from the last pig they killed, and thinking, “Hmmmm…”

Coming as it does from a region where people needed to burn fat in the cold winters, this is no dish for the calorie-conscious. It’s heavy on the butter or lard, whichever you wind up using. (The recipe below uses herb butter, which is readily available in Switzerland and makes the dish a little more interesting).

Also, it takes forever to make maluns. Or at least it feels like forever while you’re standing there stirring the stuff. It’s like old-fashioned polenta: there’s no way to hurry it up. (And unlike polenta, it doesn’t seem likely that any enterprising Swiss convenience-food maker will come out with Quick Maluns any time soon. In fact, the concept feels vaguely illegal somehow.)

The method is simple. You grate the pre-boiled potatoes. (They have to be boiled a couple of days previously and allowed to cool: this causes some of the starches in the potatoes to start to convert to sugars, which helps the potatoes form up into the desired “crumbs.”) You stir the grated potatoes together with the flour and salt called for in the recipe. Then you melt the butter in a heavy iron frying pan, sprinkle in the potato mixture, and start stirring. And you keep at it for at least half an hour.

Over the course of that period, the potato mixture first turns into an unpromising-looking sludge. But then this starts to break up into little balls or crumbs. These start getting a beautiful toasty brown. Finally they start to get actively crunchy… which means they’re just about ready.

In a hotel or restaurant in Switzerland, maluns usually arrives from the kitchen with a bowl of sharp apple puree on the side. In some places, it arrives with a local bergkäse shaved or grated on top, or possibly just some Emmental. You dunk forkfuls of the maluns into the apple compote, and in between you take long cool drinks of whatever local white wine has been recommended. (There are people, usually from the older generation of maluns-eaters, who suggest that the only proper drink for this dish is milchkaffee, the heavily milked big-serving coffee beloved of the Alpine regions. Probably it would be disrespectful to start an argument with them on the subject.)

To make maluns for four people, you need:

Peel the parboiled potatoes and grate them on the coarse side of the grater. Sprinkle over them the flour and salt, and stir together lightly.

Heat the butter and add the potato/flour mixture to the pan. While keeping the heat low and steady, stir almost constantly until the potatoes form large “crumbs” and are golden brown. Don’t overdo them! They’re meant to be only slightly crunchy on the outside, and tender on the inside.

When the maluns is done, shave butter over the top before serving. Serve with milchkaffee (half and half milk-and-coffee) or a cool white wine, with applesauce on the side—a sharp or tart one is best.

(This recipe was adapted from Bewährte Kochrezepte aus Graubünden [Tested Recipes from the Graubünden], a charity cookbook produced by the Chur chapter of the Swiss Women’s Institute.)

*The word maluns is distantly descended from the Latin micula / miculones: “little crumbs.” These terms were worn down from Latin into the modern Swiss Romansch word now used for this dish through a number of different forms — mig’luns / migluns, micluns, maleums. Maluns is also known as Bündner kartoffelribel in German, or by the dialect name Hoba.