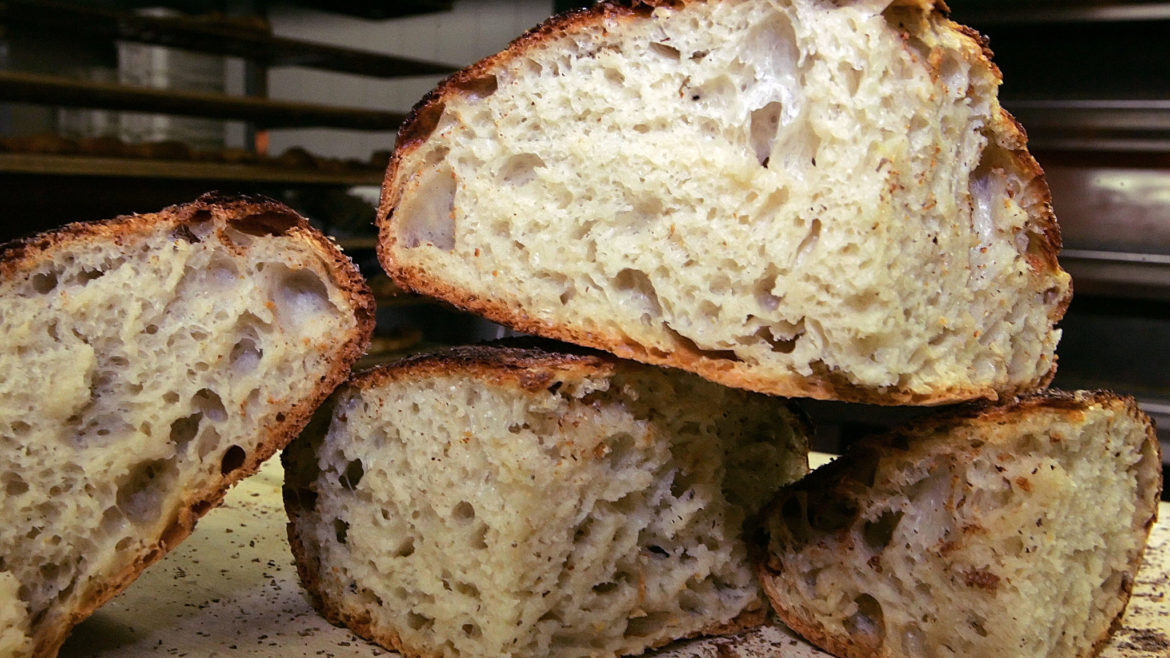 Like (it seems) about half the Internet-connected bread bakers on the planet, I’ve been experimenting with the New York Times-published recipe from Sullivan Street Bakery’s Jim Lahey for no-knead bread. (The original NYT article, which talks more about the recipe’s genesis, is here. The article discussing the ensuing discussion, and suggesting possible fine-tuning, is here.)

(Also — I keep forgetting that the NYT wants you to register to read anything. There’s a version of the recipe in the clear here.)

The basic idea is surprisingly simple. Mix up the bread dough (I use 4 US cups of flour to 2 cups of water, about a teaspoon of salt, and ten grams or two teaspoons of quick yeast) to a really-thick-batterlike consistency… then cover the bowl you’ve mixed it in, and let it rise cool and very slow rather than warm and fast. We’re talking an eighteen- to twenty-four-hour rise here (though I’ve done it in as little as twelve). Stir it down, shape it minimally, and turn it out onto a floured cloth or floured silicone mat for a secondary rise (two hours or so). Then bake it in a preheated, lidded pot. This treatment generates the confined live steam that provokes that coveted pain-de-campagne-type crust….and you don’t have to shell out something like $3000 for an oven with a steam injector.

So far I’ve done the bread about (ETA: 2021) twenty times now, with varying flour mixtures and equipment. All of them have turned out at least tolerably well. A couple of times they’ve been spectacular: when you hear the bread’s crust making that crackle-crackle noise as it cools, you know you’ve got a winner. The loaves rise nicely and have a nice springy crumb, not at all too solid.

Discussions about this bread are going on here and there. My two cents, for anyone reading this who’s seen the recipe and is interested in trying it:

(a) All my efforts have been with garden-variety UK/Irish style “plain” / “strong white” flour. This has worked all right, but I suspect proper bread flour would work better, as our flour tends to be strong on the soft wheats and can therefore be a little disappointing in the gluten department. Adding rye flour is OK (I was using Doves Farm organic stoneground rye), as far as about 15% of the total amount. (The first recipe was measured in cups: fortunately the “fine-tune” article offers conversions to volume, which in my opinion work better for baking.) I liked the rye version best, especially the one I did with a lot of caraway seeds, but then I’m a Jewish-rye freak.

(b) The highest possible temperatures in the preheating (noncommercial) oven are vital. We have a fan oven which is officially rated for 230° C but actually achieves closer to 240°. I understand trying to work at this temperature is a problem for people working with modern Le Creuset pots, which have plastic handles that are vulnerable to heats that high. Fortunately, all our ironware is vintage Le Cousances, with metal handles, and these pots shrug off such minor problems. (Annoyingly, Le Creuset bought the Le Cousances company in order to get hold of their rival’s name and put them out of business, boo hiss boo. So they have the name now, but the pots being sold as “Le Creuset Cousances” are in my opinion nowhere near as good as the originals…and have those miserable plastic knobs. Fortunately, you can still find the older, better Cousances pots on eBay — here’s one, for example.) Anyway, if your oven won’t go past 220° C / 450° F, just start your preheating really early — give that pot an hour or so in there at top heat — and I’d guess things will still probably work out OK.

(c) This may be the wettest, floppiest bread dough you will ever have seen. Don’t panic. It’s going to be all right. Don’t overflour it during the short time you’re shaping it after the first rise, and have something handy to scrape your work surface with; because there’s just no way out of it, this stuff is going to stick to something sooner or later. (Mostly you.)

(d) Don’t be afraid that the dough’s going to stick to the baking vessel when you dump it in there. For some reason, it absolutely will not. It’s miraculous that way.

(e) You don’t need a huge pot for this. A small one does fine, especially considering that the dough is so floppy. The Cousances pot I was using has a 2-liter capacity.

…I’ve been thinking about trying this recipe out in a clay baker: I’ll go halfway with that tomorrow and try doing the loaf in a clay loaf pan inside the biggest lidded iron pot. We’ll see how that turns out. If it’s nice, I’ll put up a picture here. (Hey, even if it’s not nice. This is all an experiment, after all…) 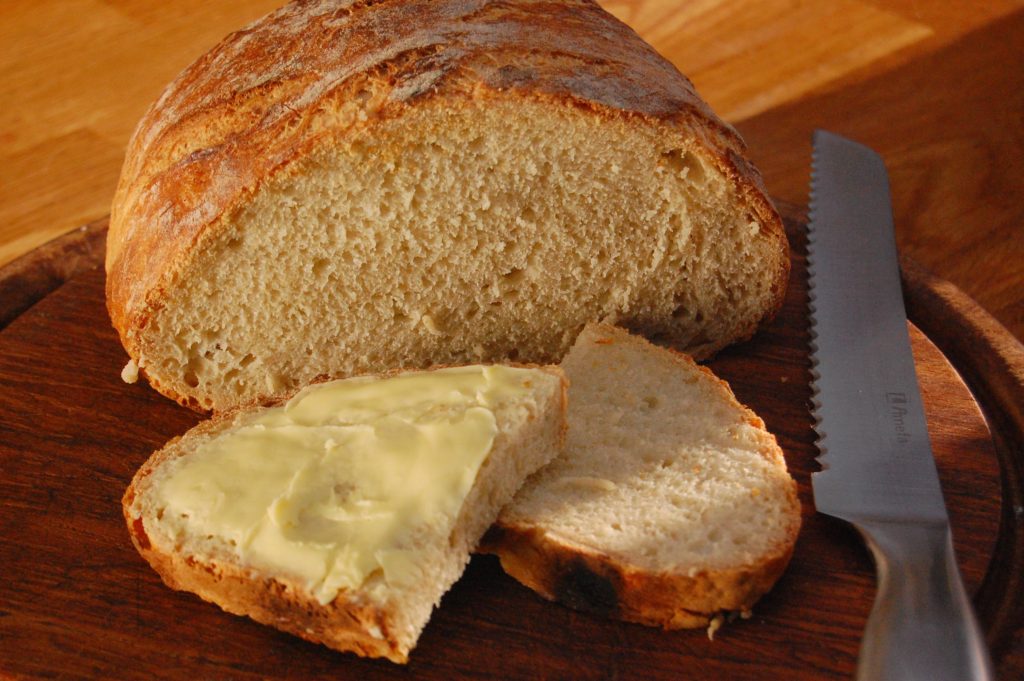 Other online food fun for today