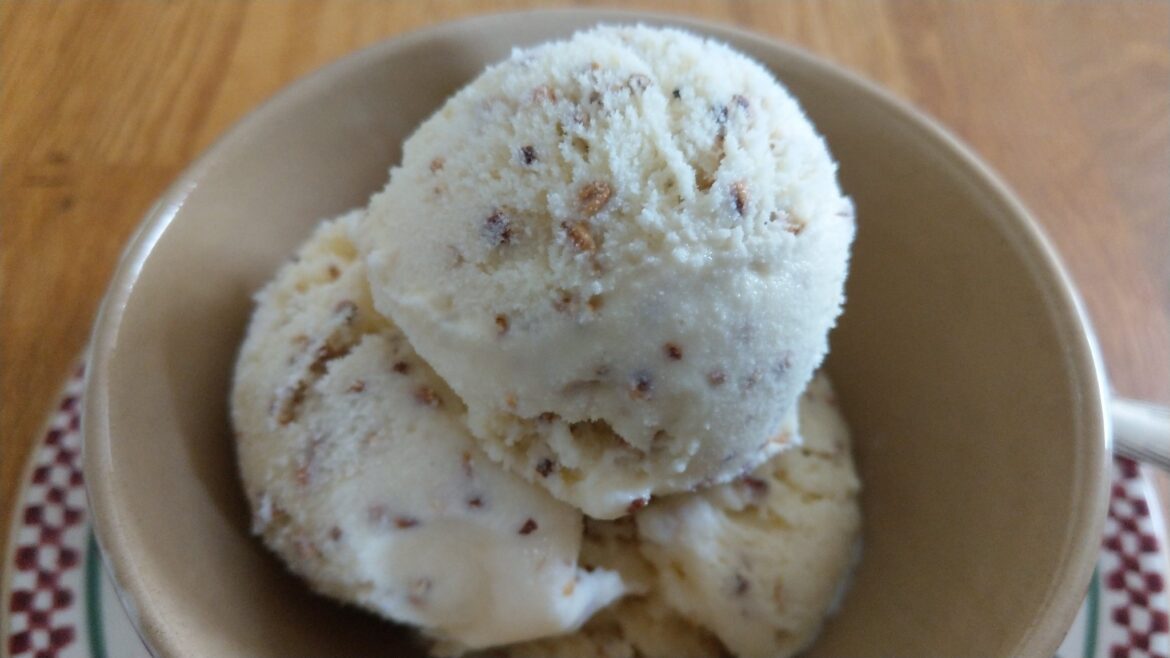 This recipe, in a number of variants, is a favorite around here. I’ve referred to it here and there online, but realized (when I went looking, per a request) that I’d never actually posted a full recipe. So here it is.

It’s based on the “sweet cream base #1” recipe from the Ben & Jerry’s Homemade Ice Cream & Dessert Book (which we picked up when it first came out, and I’m really pleased to be able to tell you is still in print. There’s also a Kindle edition, which is a nice plus).

The recipe for this goes as follows:

Whisk the eggs in a mixing bowl until light and fluffy. Whisk in the sugar, a little at a time, then continue whisking until completely blended. Pour in the cream and milk and whisk to blend. (Makes one quart.)

If (as may be the case) you aren’t comfortable with using uncooked eggs, or just don’t want them in there at all, there is also Sweet Cream Base #2:

Now, as for the three vanillas: Generally speaking, my idea, when I started doing this, was to use three vanillas from different regions, or at the very least, three vanillas made using different styles of preservation/processing… the general idea being that, if it all worked out, the flavor of the finished product would present a sort of spectrum of vanilla flavors instead of one flat background effect.

The three vanillas I routinely try to use tend to go this way:

(a) An alcoholic-based vanilla extract. I routinely use Nielson-Massey, though frankly there are a lot of far cheaper ones that will do as well, considering that a number of vanillas are involved in this procedure.

(b) A different form of vanilla, ideally of a different origin, and usually in a paste form. (I like this one, which we get from our local grocery.)

(c) At least one fresh vanilla bean. (Meaning, unprocessed except by the usual drying and curing that’s part of preparing the seed pod of the vanilla orchid.) (You can grow them, did you know? But apparently they require very specific conditions and are not easy to work with. See this article for details. There’s also a useful article here with a lot of basic background on vanilla and its harvesting and preparation. Yet another of those products that one tends to take for granted, while at the production end it’s amazingly labor-intensive…)

(d) And sometimes I might go for a fourth vanilla, if I had another form around.. such as, for example, a vanilla powder. Or: I make a pretty fair vanilla whiskey. Recipe: Slice open a vanilla pod. Scrape out the seeds in the usual manner. Chop up the pod. Put all of this in a little bottle — maybe about 100ml, tops — and add whiskey. […Generally I wouldn’t use too smokey a whiskey for this: mostly I use one of the more innocuous Irish whiskeys like Powers or Paddy’s.]) Leave this alone in a cupboard for at least a month or so. This is what mine looks like at the moment (and you should have seen how dark it was before I topped it up just now!). As you use it, you add more vanilla beans and top it up with more whiskey. (And there’s no reason this wouldn’t work with other alcohols. Vodka occurs immediately, or Polish pure spirit, as something that would more or less stay out of the way of the flavor of the vanilla. All the same, now I’m thinking about vanilla gin…  Hmm.) 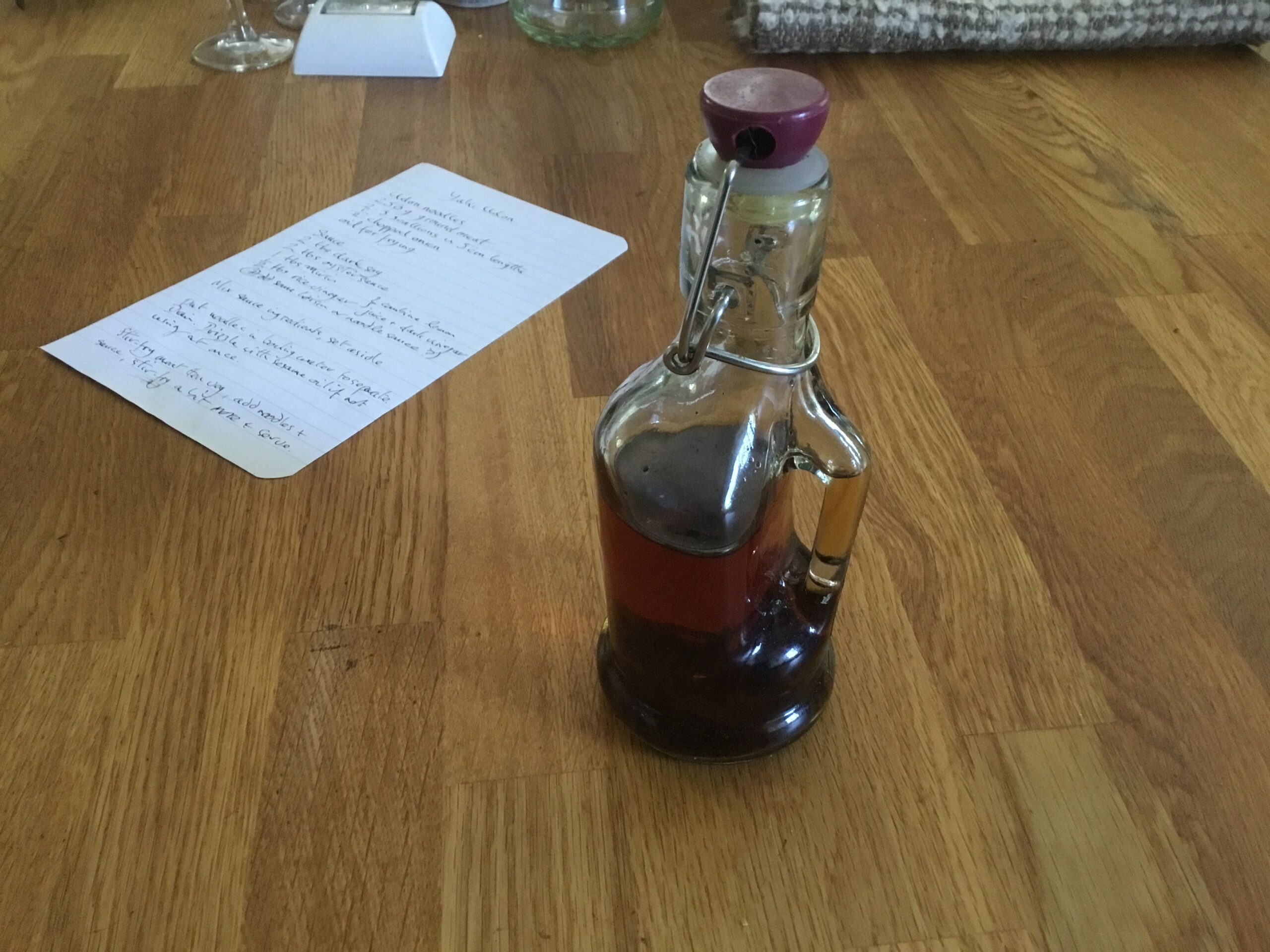 …Anyway. A reminder from the food chemistry department as regards alcohol in ice cream: if you add more than about a quarter cup of alcohol (60ml, give or take) to a given quart of ice cream mix, it will function as antifreeze and you’re likely to wind up with a very sweet and lovely slushie, but not much more. So don’t get carried away. Do your math as you put the vanillas together.

I have little experience with non-machine-based ice cream making, so if you have a recipe for a no-machine version that you like, just make a very plain one and add a couple or a few of your chosen vanillas to it. If you’ve got a machine, the procedure is simple: to your basic mixture, add the vanillas you prefer, whisk them in, and freeze as usual. If vanilla powder is one of your chosen ingredients, I’d mix about half of it into the initial mixture, and sprinkle in the rest of it close to the end of the freezing period, as the ice cream’s firming up. Over the next 48-72 hours in the freezer (assuming you like to leave your ice cream alone for a bit to let it develop its flavor), the dry vanilla’s flavor will intensify.

… And that’s it! Noting of course that adding fruit to this mixture (either in the ice cream, or on top) works really well.

(Disclosure: We’re in the Amazon Associates program, so if you use the Amazon link(s) above and buy something with it, we get a wee tiny commission. Just so you know.)