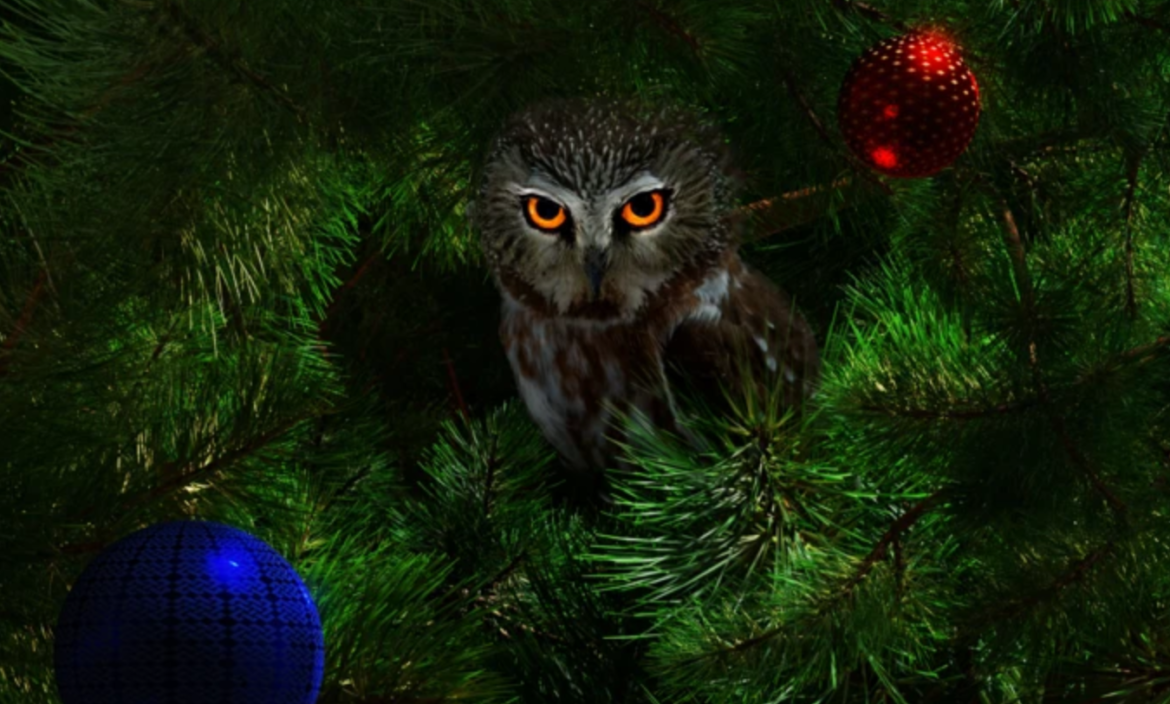 ETA: Owl Be Home For Christmas is now complete! You can purchase it here:

Owl Be Home For Christmas at Ebooks Direct

…Sometimes work and life come at you fast, in tandem.

I was taking a break from work on Tales of the Five 3: The Librarian last week, and (as I do frequently during the day) having a look at Twitter, when something unusual came across my dashboard: this.

They found a small owl inside of this year’s Rockefeller Christmas tree, he hitched a ride all the way to NYC and is now being treated and cared for at a wildlife rehab facility. pic.twitter.com/f4PkBm6MGo

…There are writers who routinely get images before words. I would (often) be one of those. And the image I got—very much sparked by the expression of the small creature in the box—was straightforward and immediate.

Hmm, I see a (forget-the-heartwarming) children’s book in this. (Because that expression says “WTF?? YOU CHOPPED DOWN MY F*CKING TREE!”) So on Christmas Eve, a MILLION OWLS mount a rescue mission from the North, pick up the tree, and take it (and their buddy) home. The End. ❤️ https://t.co/bRy2rshIin

The response to those tweets was pretty enthusiastic, and I realized that I was in the position of the fisherman wandering up the beach after work who finds a pretty stoppered bottle washed up at the tideline, picks it up, wonders what he could get for it, uncorks it to have a look inside… and finds that the situation has abruptly changed. Because (a) the image wouldn’t let me be: and (b) …well, just look at the responses. The saying in the PR-handling business used to be: “For every person who writes to you saying that they want a thing, there are ten more who want it who haven’t bothered writing.” And leaving that issue to one side… here were all these people who do want it, and said so.

So: nothing to do but rev up the storytelling engine and get busy.

It took me a day or so to sit with the concept and decide how it was going to be handled. Normally I keep my storytelling away from the here-and-now, but dealing with this situation was going to make that impossible. I then spent another day or two in data-gathering—not necessarily stuff that was going to show in the story, but stuff that was nonetheless vital: there’s no putting flesh on the bones until the skeleton’s assembled.

But I was also waiting for a specific event to occur, as it was going to have to be part of the story: that event being this.

Rocky’s release was a success! She’s a tough little bird and we’re happy to see her back in the wild. She will feel your love & support through her journey south.#RockefellerOwl Please help us continue our mission to help birds like Rocky for years to come https://t.co/Wg4S9kJZbb pic.twitter.com/AJZ5xPrVQt

Once that had happened, I was ready to go, and started work in earnest.

So: a status report. I’m well into the body of the story now. My estimate at the moment is that it will run about 20.000 words. (If I need more, I’ll take more: but I refuse to push a story into being longer than it needs to for mere length’s sake.)

My intention is to drop the story on both Amazon and at Ebooks.Direct in the early evening (7PM-ish US/EST) of December 2, 2020, to coincide with the lighting of the tree in Rockefeller Center. (ETA: This didn’t happen: the story dropped at Christmas 2020.) I’ll tweet the Amazon and EBD links then, and I’ll add purchase links / widgets on this blog post/page: so you might want to bookmark it. If you’re a Twitter user, you can also keep an eye on the #OwlBeHomeForChristmas hashtag there—I’ll use it to post the occasional update between now and Wednesday.

Please note that this will be an ebook-only release. The technical challenges of a paperback or hardcover release for so short a work are too significant to attempt to deal with between now and next Wednesday. Other formats for the book will be something I’ll consider after the ebook comes out. (In particular, I might do an author-reads-it audiobook. We’ll see.)

The Ebooks.Direct version of Owl Be Home For Christmas—available in Kindle, Nook, Kobo, Apple Books/iBooks, and generic .epub formats—will be less expensive than the Amazon version, by (ideally) about 15%. By getting it from EBD, you support the author directly and make sure that she gets a larger slice of the price “pie”. (Meaning “all of it” instead of “70% or thereabouts.”) Getting the ebook into your e-reader or system (especially Kindle) is simpler than it used to be, and store staff will assist you if you need it. Please consider this option: and thank you!

Also: please note that we’ll be making a 25% donation from all our sales of Owl Be Home For Christmas to the Ravensbeard Wildlife Center, which took care of “Rocky” in the aftermath of her discovery in the soon-to-be-Rockefeller Center Christmas Tree. If you feel like offsetting that contribution by dropping something extra in the author’s kitty, you can use the PayPal.me link or the “Buy A Cuppa” option at this Ebooks.Direct product page to do that. (And those of you who feel inclined to encourage the author right now can do that, too. It’s gonna be a loooong weekend and a lot of caffeine’s going to be involved on this end…)

That’s all I have to tell you at the moment. December 2 is coming, and I’ve got a lot to do.

For your interest, and your continued support: thanks, all! 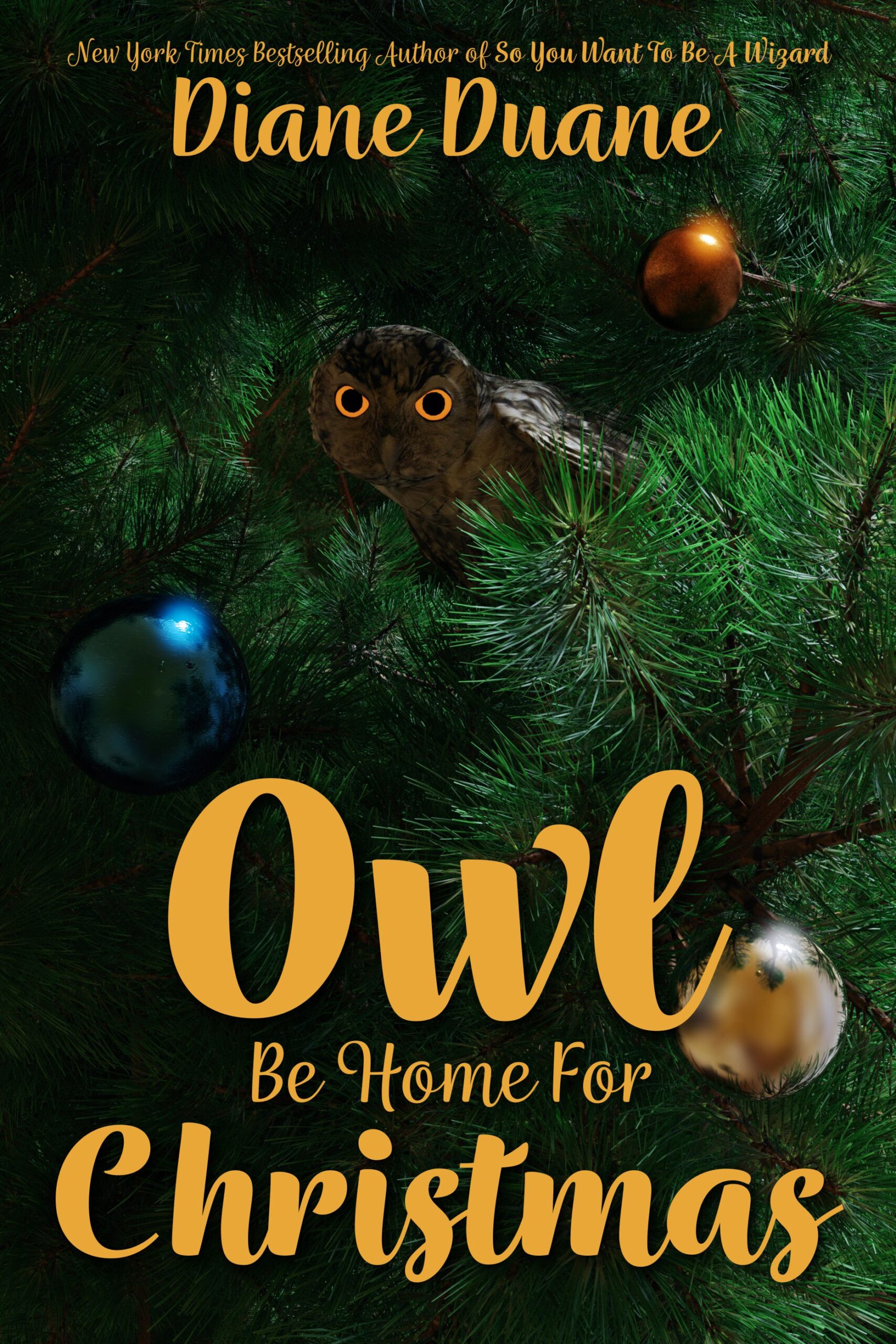