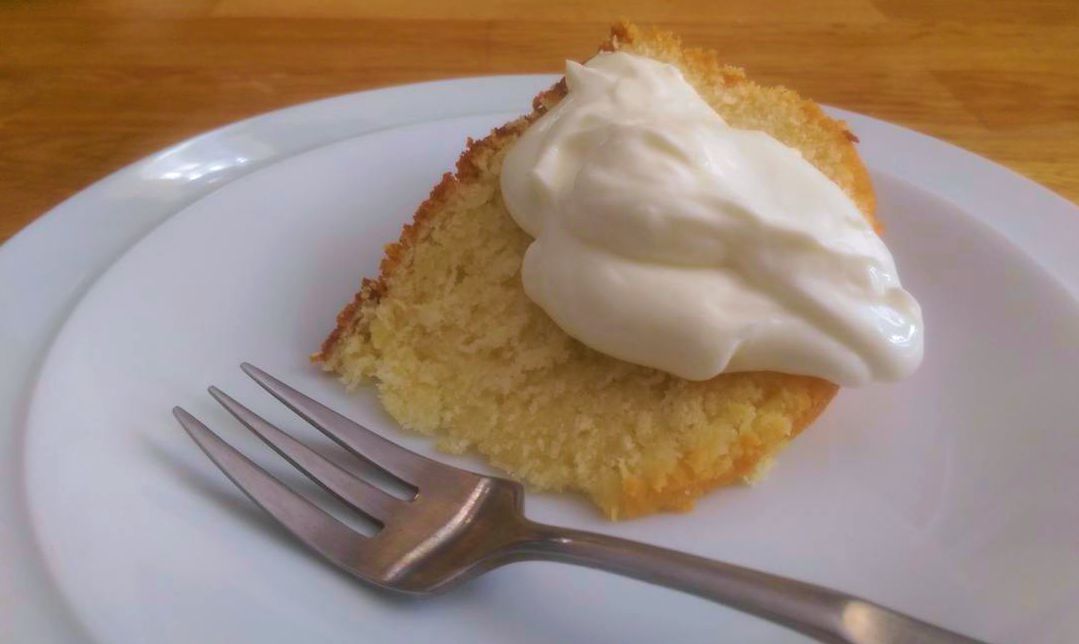 I need a cake safe

So on the way back from the interview (oh yeah, here’s the podcast link) at Dublin City FM the other day (hi Clare, hi Kitchen Table folks!) I stopped in at the local supermarket to pick up a few things and grabbed, along the way, some lemons. It was because this recipe had come up on my Facebook feed the day before, and it had started noodging at me because I hadn’t made a cake in ages.

So I made it, as much to give our vintage Bundt pan a workout as for any other reason. And wow, did this turn out well! Substantial without being too dense: a lovely firm crumb that is also beautifully moist. So while I’m copying the recipe here for my own purposes, I strongly suggest that you visit Carrie’s site at myrecipeconfessions.com and see what else she’s got there, as if this is anything to go by, the prognostications look good.

One note about this in passing, though. I’m not sure how to get to grips with her description of the cake’s lemon flavor as “mild”, as it’s no such thing unless you start eating the cake before it’s even fully cooled. (Guilty as charged. I was craving something sweet at that point, and it had smelled really good while baking.) The lemon fragrance and flavor intensify the longer you can force yourself to leave this cake alone.

Which is why I need a cake safe. 🙂 Peter and I have been muttering at each other for months that we need a cake carrier — you know the kind of thing, a Tupperware-or-similar business with a base that you sit a cake on and a plastic dome that goes on top and screws down a bit into flanges to close up, and a handle for carrying it. It’s a serious need, as we’re constantly baking things that we can’t finish ourselves (or that it would be bad for our waistlines to do that…) and then walking them down to the local pub to get the neighbors to eat them instead.

But for this cake you would need one where once you twisted that top down into place on the base, it would lock down and refuse to open for, say, twenty-four hours. Or forty-eight. And if you absolutely couldn’t bear being kept out of it before the expiration time, you would go into the app (of course there would be an app…) and be forced to pay yourself a non-insignificant amount of money to get the cake safe to open up early.

Just a thought. Who knows, in this Internet of Things we’re now living in, maybe someone’s invented such a thing already.

Meanwhile that damn cake is three-quarters gone, and the neighbors are never going to see any of it, and I’m going to have to make another…

(Who knows, it might actually be Italian…) A couple of notes: surprisingly, when I made this, we were out of buttermilk (not normal around here). I simply soured the milk with a couple of tablespoons of lemon juice, as there was plenty of that around. Also aolso: Regular salted butter works fine with this. Also also also (wik): I didn’t bother making the icing. I’ll try it the next time.

1. Sift flour, baking powder, and salt and set aside. In another bowl, cream butter and sugar until light and fluffy. Beat in eggs, one at a time. Mix in the sour cream, lemon juice, vanilla, and lemon zest.

3. Bake for 60 to 70 minutes or until a knife inserted in the center of the cake comes out clean.  Remove the cake from the oven and allow to cool for 5 minutes. Turn the cake over on a cake platter. Spread half of the lemon glaze over the warm cake so that the glaze can soak into the cake. Let the cake cool completely and drizzle the remaining glaze over the cake.

Cream the butter and slowly add powdered sugar and lemon juice. Beat well until the glaze is a creamy smooth consistency.