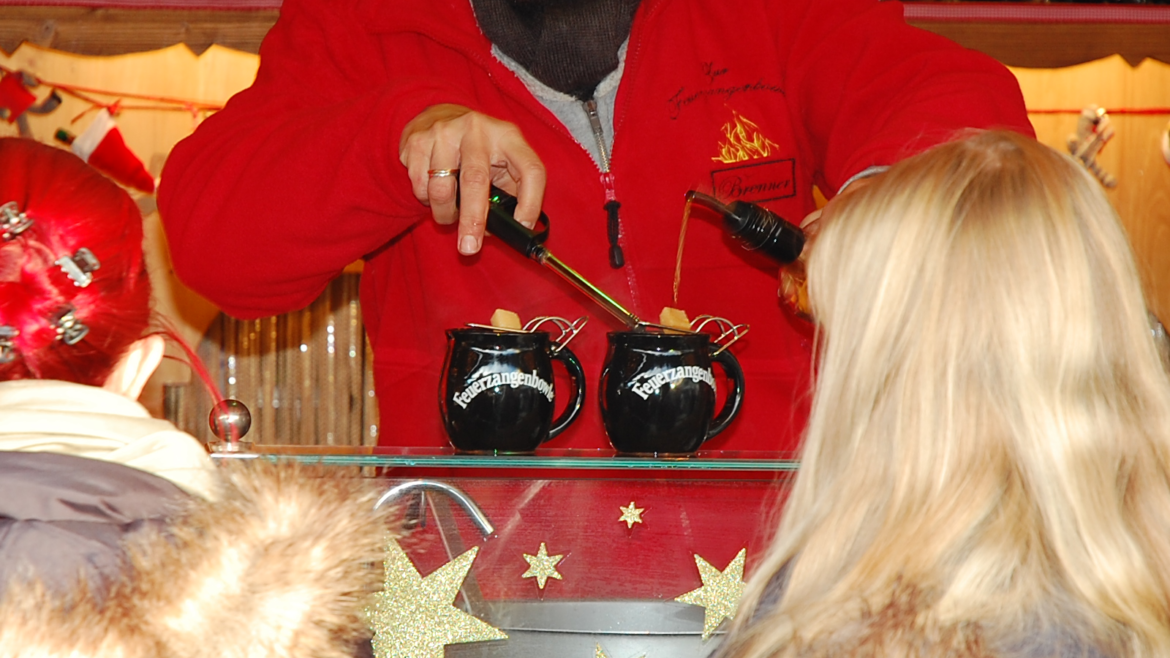 …Okay, wait. A moment’s worth of scene-setting is called for.

So it’s 2014, and we’re in the Münich area for the Christmas period—something that for some time we’d been planning to do when we had enough money: and that year, we did. After a night or two spent in Münich proper and touching base with some friends / business acquaintances, we headed off to the nearby ancient university city of Augsburg to spend Christmas there. As do many other German cities, Augsburg has a very nice Christmas market—the Christkindlesmarkt—and we spent a happy pre-lunch and post-lunch hour there picking up some small presents for friends and family, and (as one does, if so inclined) visiting the local food and drink stalls.

A stall we’d never seen elsewhere was one selling Feuerzangenbowle. We looked on in wonder for a while, and Peter (having recently acquired a new lens for his camera, and a powerful new camera-dedicated flash) started taking some photos.

By a truly magical bit of timing—and also by dint of being really good with his camera—he managed to get this shot of the lady in the Feuerzangenbowle stall dosing the sugar cubes sitting on the cups’ little built-in tongs (that’s the –zange– part of the word) just before setting them on fire. (In her right hand she’s holding the device with which she’ll torch them.) 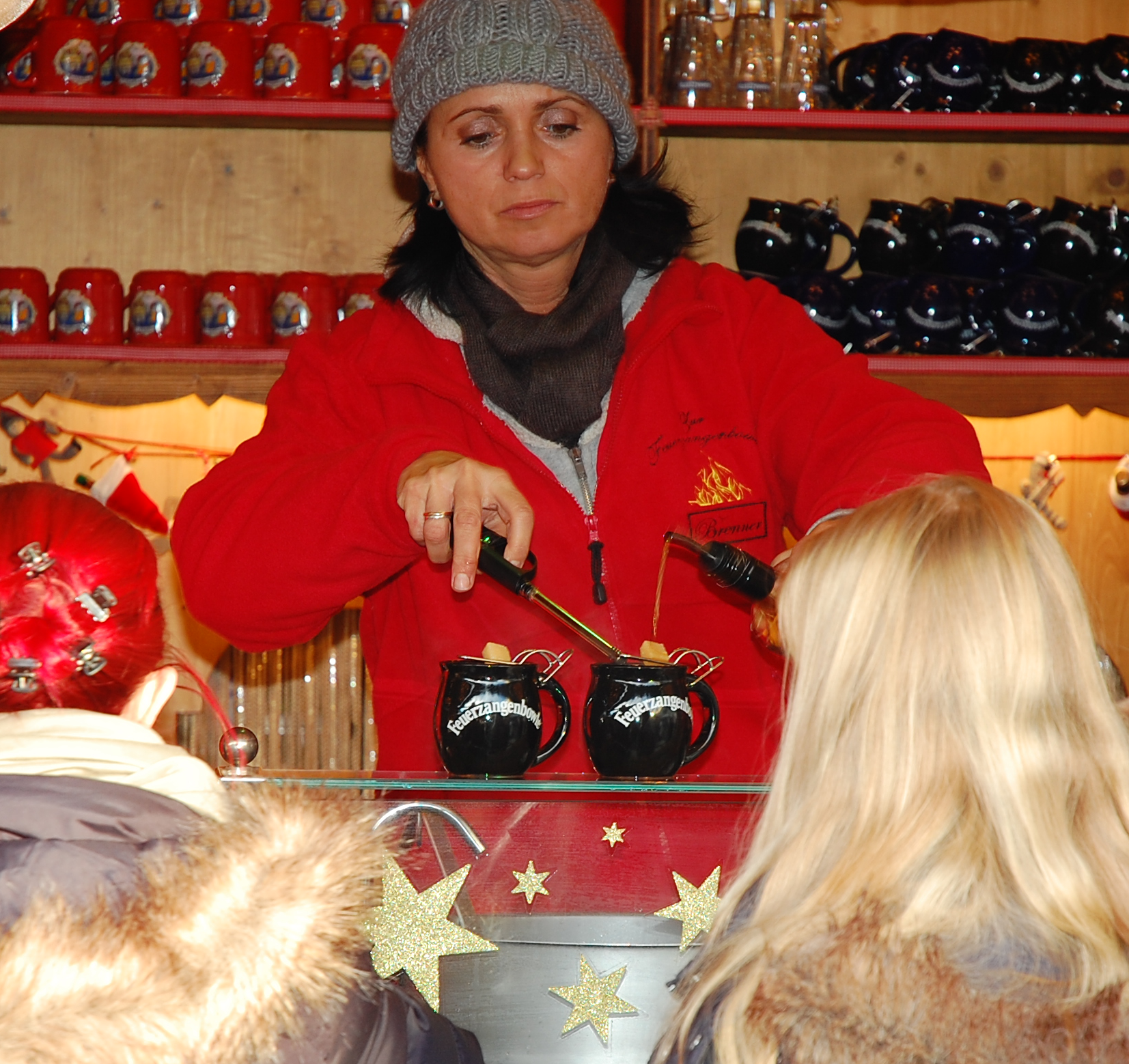 So after he had the camera put away again, P. ordered one for himself (I was then standing off to one side drinking glühwein, less dramatic but also potentially much less angst-ridden) and brought it back. “Oooh,” he said, “smell that, isn’t that lovely, smell the sugar caramelizing…” And I bent over to take a sniff.

And suddenly we could both smell something that WAS NOT SUGAR CARAMELIZING wut wut WUT WHAT THE FUCK HAVE YOU DONE TO ME NOW  MORWOOD?!

…Seriously, it’s okay. I’m fine. But make a note for yourself:  DO NOT LEAN OVER THE DAMN FEUERZANGENBOWLE until the flames have GONE OUT. 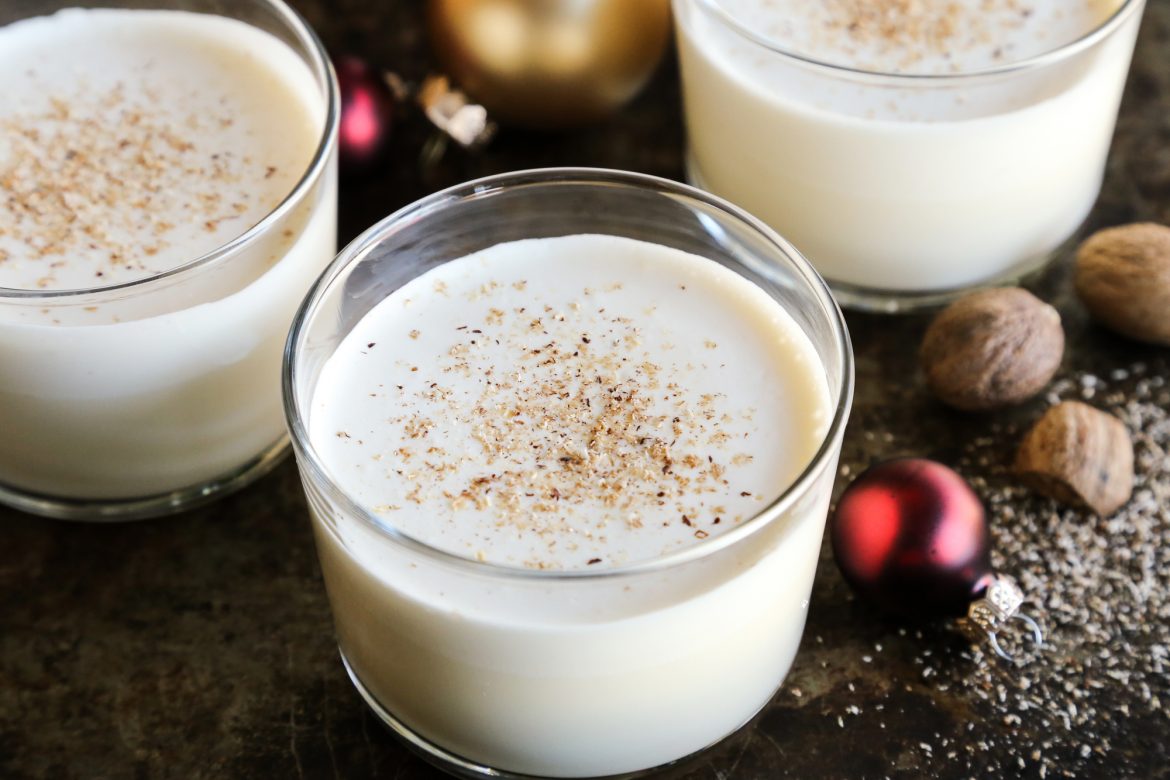 The divine Miss S. and the Eggnog Recipe

Nothing could induce me to reveal her name.

It was a long time ago, on the 6th floor (as it then was) of a New York City psychiatric hospital. As one of the most junior nurses working on the floor, I saw many unusual things, most of which the seal of practitioner-client confidentiality prevents me from discussing. But come holiday time, there was a recurring event which I now feel it safe to reveal.

It was Miss S.’s eggnog.

Miss S. was…frankly…a goddess. In a time when the term is thrown around with idiotic lassitude by razor manufacturers and those trying to make a fast buck, as well as those whose characters partake a whole heck of a lot less of the divine than they’d like to think they do, the term is desperately overused. But it would not have been misused of Miss S.

She was Jamaican. (And still is, as far as I know: the past tense here should be understood to imply my past and not her passing.) She was about six foot two. She was, straightforwardly, stacked like the brick ****house of your best imaginings. She wore her hair quite, quite short, and this helped her look more like a superbly carved ebony statue of some torrid-zone deity than you can possibly imagine. There was no room she merely entered: she was her own procession.

Miss S. was also a truly excellent psychiatric nurse. She had a liking for evening and night shifts, which is probably why I saw so much of her (being then the most junior member of staff and therefore routinely stuck on nights during much of the early part of my practice there). Working with her was always a treat. Under that gorgeous slow-spoken smooth-as-treacle Jamaican accent lurked the intention and skill of a wily and thoroughgoing professional, a woman who could get anyone (mostly meaning our clients) to talk to her about anything (mostly meaning whatever was bothering them). She was formidable, indeed nearly fearless: I once saw her take a fire axe off a seriously out-of-control schizophrenic with no weapons but that voice (in basso-growl mode) and a scowl. Nobody messed with Miss S.

She also made the most outrageous eggnog. Here’s her recipe.

You take a dozen eggs. You separate the yolks from the whites. You freeze the whites and do something else with them. (Probably meringue.)

You mix it all well and put it in the fridge, tightly covered, to get friendly with itself overnight.

The next day you combine this mixture with about half a gallon of whole milk and at least a quart of cream — more, if you like. And the rest of the rum. Into this whole business you then grate fresh nutmeg (not more than a quarter teaspoon, as nutmeg is toxic in excess) and some cinnamon and allspice to taste. Check the flavor, and then add more milk/cream if you feel the eggnog’s too strong.

Refrigerate for a while more: then serve it forth.

Miss S. also told me about a stronger version of this — apparently called the “Pan Am Pilots’ Eggnog” — which involves the further addition of a dozen whipped egg whites and a bottle of apricot brandy. This is doubtless why Pan Am went under.

…I’ve been making this eggnog on and off for more than twenty years. It’s now traditional down at our local pub on New Year’s Eve: our thank-you to our neighbors for putting up with our constant search for Galactic Domination.

Try it…see what it does for you. If you try it, raise a glass to the Divine Miss S.