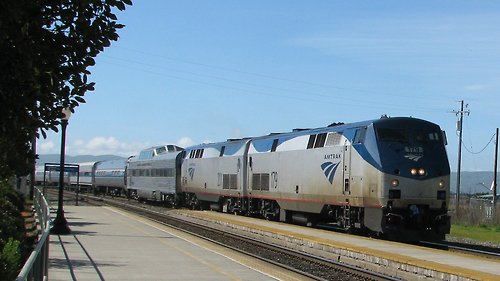 The “Amtrak Residency”: Why I Think This Is A Really Bad Idea For A Writer

I’ve felt sorry for Amtrak for a long time. Economic pressures and the unique problems of any rail system based inside the US (where automobile travel has too long been the be-all and end-all) have turned it into a faint shadow of the formerly great passenger and freight rail lines that helped define the 19th and early 20th-century history of the US.

But I’m finished feeling sorry for it as of now. It’s no crime to have fallen on hard times. But offering people what seems to be something wonderful and then to have it look like they might be trying to take advantage of those who take up the offer? Not good.

On the face of it, it sounds like a lovely idea.

#AmtrakResidency was designed to allow creative professionals who are passionate about train travel and writing to work on their craft in an inspiring environment. Round-trip train travel will be provided on an Amtrak long-distance route. Each resident will be given a private sleeper car, equipped with a desk, a bed and a window to watch the American countryside roll by for inspiration. Routes will be determined based on availability.

Applications will be accepted on a rolling basis and reviewed by a panel. Up to 24 writers will be selected for the program starting March 17, 2014 through March 31, 2015.  A passion for writing and an aspiration to travel with Amtrak for inspiration are the sole criteria for selection. Both emerging and established writers will be considered.

But then you read the terms and conditions, and the alarm bells go off big time.

Clause 5 is where the trouble starts. From the cautious writer’s point of view, clause 5 can be read as meaning: “When you turn in your application, gee, anything can happen to your original writing. Who knows? We have a billion PR people working for us whose work yours might be [airquotes] confused with [/airquotes]. By signing this you agree that should this happen, you have no recourse, and we never have to credit you or pay you one thin dime.”

Clause 5 by itself ought to be enough to make you walk away. But then comes clause 6, in which you assign to Amtrak the irrevocable world rights to all the data in your application including your writing, forever and a day. And the day after that.

I learned the lesson long ago both from other freelance writers and at my agent’s knee, and the lesson is as important now as it ever was — in this day of the effortless digital ripoff, perhaps way more so. The lesson is this: Never give anyone world rights to any of your writing.  Ever. Ever. Because who knows if that one piece of writing is the one that would have made you famous worldwide and rich beyond the dreams of avarice? Or  more to the point, what if they later do something with your writing that is absolutely opposite to your intentions and which you find harmful or offensive? You’d have no recourse there either. I wouldn’t sell anyone world rights to a story for a million dollars and that necklace of flawless cabochon emeralds I saw in the window at Harry Winston that one time. And sell away world rights to something for the price of a single train ticket? I don’t think so. They could plate the inside of that sleeper with platinum and lay on catering from Dallmayr and I still wouldn’t do it if it meant they got irrevocable world rights.

Better pay the ticket price yourself and keep the rights to your work in your own pocket than swap those rights for the chance at a single train ride, sleeper or not. (And something else to note here. There is no declaration of who owns the rights to the material you produce on this train trip. There is no way to tell what paperwork you’re going to be required to sign if you actually win. Oh, and did I mention the background checks they want to conduct on you first, to make sure you’re not some kind of crypto-crook who’s going to embarrass them? Clause 9.)

…Now, I hear they’re fixing clause 6 in some way or other (doubtless already having heard the first wave of complaints). That’s all well and good. But I haven’t heard a word about clause 5, which stinks to just as high a heaven.  And they originally thought clause 6 was fine as it was. That says way too much about their non-clarity on the concept of what belongs, or might reasonably be expected to belong, to writers.

So please, I beg of you, unless the legal language associated with this offer is amended, you should consider stepping away from the very large diesel-powered vehicle. I too am passionate about train travel and writing… way more than most people might guess on the first count. But this is not the way to go about it.

…Let me add, for clarity’s sake, that I think aiding writers to experience rail travel as a possible source for inspiration in their writing is a super idea. The people you meet who you’d never have met otherwise, the places you see from a train that you see from no other point of view (especially that strange opportunity to see, as it were, into the “back yards” of people’s lives)… they can make a huge difference to the work, no question, injecting the delightfully unexpected into the writing experience. But as usual with any abstract “good idea” when you try to drag it into real-world realization, the devil proves to be in the details. Sometimes, even with the best intentions in the world, implementation can get thorny, and unexpected consequences can get thrown up to complicate the issue.

I’m hardly insensible to the view that there’s nothing altrustic about this particular version of the sponsored-residency concept, and the way this whole business can be viewed as an opportunity for positive publicity for Amtrak. (I wouldn’t have used the word “stunt”, though here and there others have.) Never mind that for the moment. What I think Amtrak needs to deal with now is the apparent one-sidedness of the legal language attached to the opportunity — so that applicants will have some sense that there’s protection in it for them, their concerns, and their work, as well as for the company providing the opportunity.

I very much hope that happens.

Writing on the train on one’s own nickel: the Belfast-Dublin Enterprise, 2004

(CC train image at the top from Jack Snell on Flickr)