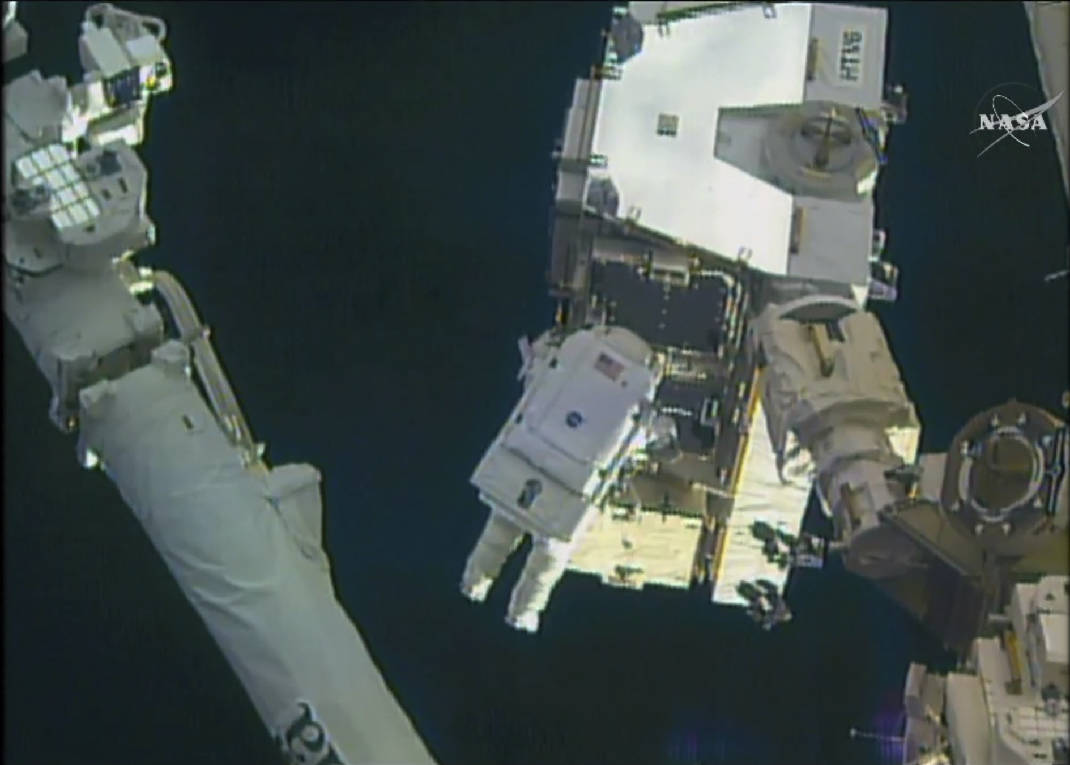 People who follow my Twitter feed know that it’s pretty eclectic, but there are some themes that repeat besides science fiction and fantasy: art (especially lithography, Art Deco and Art Nouveau, and the art of children’s books),  transport (especially trains), the news and the follies and pratfalls of those in it, and science (particularly astronomy) and space. Those with eyes to see will have been noticing that I’ve been spending more time than usual “in” space of late.

This is because the news — both the US and European political news — has  been driving me up the wall. I keep feeling the urge to turn my attention to space, where at least people seem to be doing their jobs (and matter-of-factly keeping themselves and one another alive in a hostile and unforgiving environment which, given half a chance, would kill them).

I caught myself at this the other day and at the same time found a dim memory of a phrase emerging from the background noise and submerging again, emerging and submerging: something about getting out of the hothouse atmosphere of desperate politics and into cooler air… Finally today, while watching Peggy Whitson spacewalking to install new batteries on the ISS, the phrase “a breather on deck” swam out of the darkness, and I went off to hunt that quote down. (I knew it was C.S. Lewis, but there’s a lot of Lewis and I couldn’t immediately remember the source.)

The quote turns out to have come from Lewis’s essay On Science Fiction. Now, there are some things in the essay that I agree with, and some that make me laugh (Lewis’s theory that the desire for science fiction might “burn itself out” in readers’ minds if there was too much of it turns out not to have been exactly on point), and some that just make me mutter Come on, Clive, get a grip. (Though the essay as a whole is positive, and he does give F&SF a nice plug.) But this passage, about what he labels “eschatological” SF, has resonances for me at the moment, and who knows? It might for someone else too.

Work of this kind gives expression to thoughts and emotions which I think it good that we should sometimes entertain. It is sobering and cathartic to remember, now and then, our collective smallness, our apparent isolation, the apparent indifference of nature, the slow biological, geological, and astronomical processes which may, in the long run, make many of our hopes (possibly some of our fears) ridiculous. If ‘memento mori’ is sauce for the individual, I do not know why the species should be spared the taste of it. Stories of this kind may explain the hardly disguised  political rancor which I thought I detected in one article on science fiction. The insinuation was that those who read or wrote it were probably Fascists. What lurks behind such a hint is, I suppose, something like this. If we were all on board ship and there was trouble among the stewards, I can just conceive their chief spokesman looking with disfavor on anyone who stole away from the fierce debates in the saloon or pantry to take a breather on deck. For up there, he would taste the salt, he would see the vastness of the water, he would remember that the ship had a whither and a whence. He would remember things like fog, storms, and ice. What had seemed, in the hot, lighted rooms down below to be merely the scene for a political crisis, would appear once more as a tiny egg-shell moving rapidly through an immense darkness over an element in which man cannot live. It would not necessarily change his convictions about the rights and wrongs of the dispute down below, but it would probably show them in a new light. It could hardly fail to remind him that the stewards were taking for granted hopes more momentous than that of a rise in pay, and the passengers forgetting dangers more serious than that of having to cook and serve their own meals. Stories of the sort I am describing are like that visit to the deck. They cool us.

This is where I have to admit that I’ve found myself in serious need of cooling lately. I’ve gone off watching the news nearly as much as I might have done, say, this time last year… because just about every time I turn it on I see  a reminder that Ireland’s nearest neighbor has politically shot itself in the foot (and keeps shooting itself in the foot, day after day) in a way that’s inevitably going to affect me personally and profoundly, and all the people around me. Or else I see that my own dear native land has fallen into the clutches of a coalition of the cruel, the venal, the selfish and the narrow-minded — people who I have trouble believing have ever been up on that deck — led (for a new and disastrously random value of “led”) by someone devoid of almost every trait you’d put on a list of the necessities for a person running a large and powerful country. The whole situation gives me the shivers, every day, over and over.

The need for activism to do something about this, and keep it in any way possible from getting any worse than it has to, couldn’t be clearer. But at the same time I keep having to take a few minutes to step up “on deck” — or into the thought of that deadly cold darkness that’s part of my workplace, at one remove — and remind myself that yes, all this is horrible; but if we’re lucky — and smart, and busy in intelligent ways, and noisy when necessary — it will pass. Yes, how it passes is at least partly up to us. Yes, doubtless the next four years (or two years, or ten years: pick your preferred ongoing political crisis) have the potential to go screamingly wrong in ways we can hardly imagine at the moment: ways that will make us stare at one screen or another again and again and go W. T. F and clutch our heads.

But in the meantime it behooves us to make sure we step up on whatever personal upper deck suits us and take a deep breath and do what’s necessary to keep ourselves on an even keel. Read a book, write a book, take a walk, binge-watch some show you love (I’ve been spending nearly as much time in Great British Bake-Off Land as I have in space), do a good deed that no one will catch you at (the perfect karmic antithesis to publicly claiming to have done good and only doing it when forced to), tell somebody you love them (assuming you really do)… and have those acts  be about things going better than they are. Any system no matter how large will react to having energy applied to it; and if the energy is positive, there has to be some positive effect that flows from it. I feel certain about that, if not about much else at the moment.

Somewhere in the overlapping Venn-space between Zen and the art of the practice of the sword is a statement that “The raising of the single sword will keep the whole world in peace.” So if it gets quiet over here, and I haven’t said explicitly that it’s because of work, you can assume I’m up on deck, taking that deep breath. I won’t be gone long. I’ve got a sword and I’m not afraid to use it.*

Meanwhile, I’m taking time to enjoy the sight of a woman not all that much younger than me moseying calmly around in vacuum four hundred kilometers or so above the Earth, changing the ISS’s batteries. Some things, at least, and some people, are still working the way they should.

That’s enough certainty for me to be going on with, at least for  today. Tomorrow? Like the man says, that’s another day.

*And Peter’s got a whole lot more.