Star Trek: The Next Generation: Where No One Has Gone Before 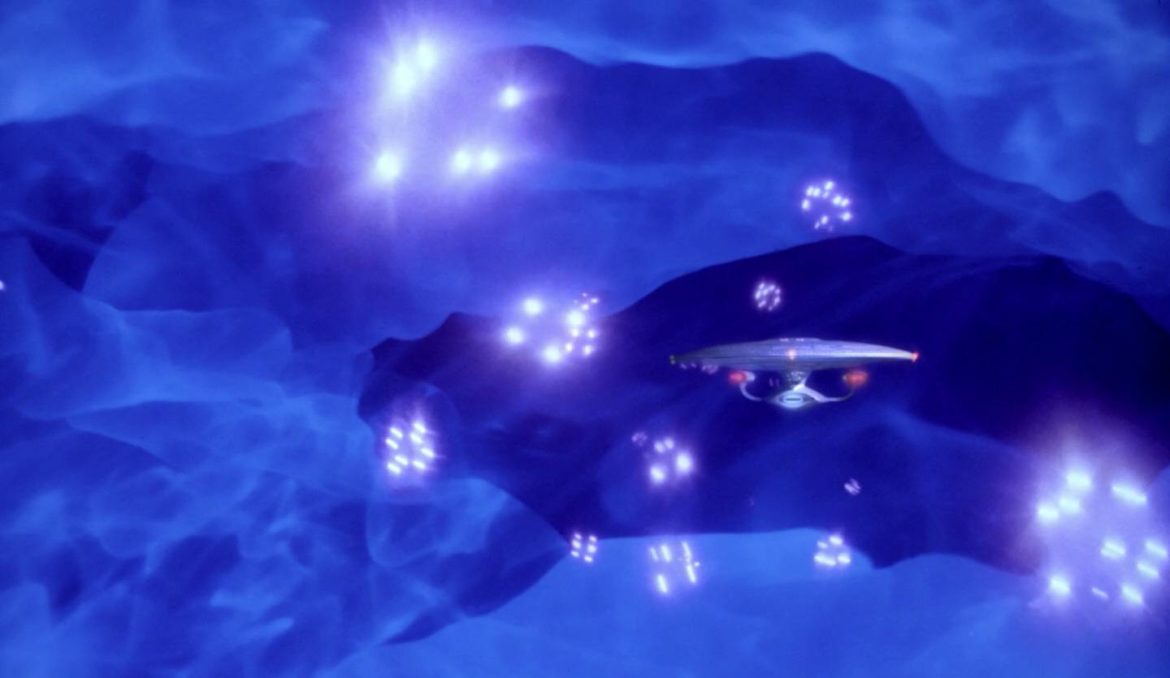 I just want to take a moment to link to this, in which the excellent Wil Wheaton gives us an in-depth analysis of the episode.

While reading it I had to stop several times to clean the tea off the keyboard, and (since Peter is still snoozing upstairs, having had a late writing night) restrain myself from yelling “How goddam true!” about fifty times. You go, Wil!

(Absolutely, what an utter arsewipe Kosinski was! — which wasn’t the way we wrote him originally, alas. And yes, the Traveler was a desperate case! But then he wasn’t our idea. Neither was sticking the poor guy in pajamas. The targ wasn’t our idea either, though I kind of wish it had been.)

Some one of these days I’ll blog much more fully about the writing of that episode. Update: see below. A long story. (Short in real time, long in fallout.) If it had a moral, it would be: “Never pitch to a production team which is in the middle of a serious political struggle with itself.” …Not that you can always choose not to do this, of course.

Yet…a lot of good things came of it. And you can’t argue the buzz of seeing your name on a prime-time property for the first time, regardless of how terribly you got rewritten. And the episode was pretty. And writing it taught both Michael and me a lot about the challenges inherent in writing for a series so new that no one knows what most of the primary characters even look like. (We wrote the script some weeks before Patrick Stewart had been cast as Picard.)

So herewith — because I forgot I already had at least some of it written down — a bit more of the story from the writer’s point of view.

Like (it seemed) everybody else in Los Angeles, when the word came out in early 1987 that there was about to be another series of Star Trek, my old friend Michael Reaves and I both got to work on ideas to pitch. At first, the ideas were very different: and I knew from the start that Michael had a much better chance of ever getting inside the front door at TNG than I did, for the simple reason that, at that point, Michael had live-action TV credit and was a member of the Writer’s Guild. At that point, those were basic prerequisites for pitching to Trek, and I had a lot of animation, but no live action, and no Guild membership.However, after about a week’s work, Michael told me that he thought he had a good idea…and he wasn’t sure it hadn’t been influenced by my ST novel The Wounded Sky. He asked if I wanted to collaborate with him, and pitch jointly.

This was wild generosity (and utterly in character for Michael). I was happy to oblige. We started work on Michael’s basic idea, and as usual, working on it together, it changed nature again: but we were both quite happy with it. (I would upload that initial document, but unfortunately it was preserved only in Michael’s computer, which suffered a disastrous disk crash some years back and destroyed various of our original files — along with the original first-draft script.)

David Gerrold, who was still in the TNG offices at that point, listened to our pitch and then had us come in to pitch to Gene Roddenberry. We came better equipped than one needs to for a pitch — with what was ostensibly a premise, but was more nearly the equivalent of an outline, in hand. Gene liked the basic story a great deal, and suggested some changes. We went home and made them: and the result, a second-draft premise, is here for your perusal. (This is my version of it: after this, the file went to Michael for his input and formatting. You’ll see some of my notes to him in this draft.)

At that point we were told to go to outline. The first-draft outline is lost: but there were, as always, “notes” (the euphemism for changes that the producer or story editor wants made), and the second-draft outline shows the result of those changes.

Memory tells me that there were notes on the second-draft outline as well, but they were not incredibly extensive, and the first-draft script which we turned in resembles the second-draft outline pretty closely. The alert reader will note some interesting oddities. Tasha’s name had become Macha at that point (or had relapsed to Macha — there were several back-and-forth swings of this kind): children on board wore “bracelets” which functioned the way the communicator badges do now, as locators: and so forth. Bear in mind that we were working at a very early stage in TNG’s development: our episode was only the sixth one shot, and a lot of things were in a state of flux. As I remember, Patrick Stewart had not yet even been cast when we were writing: we had no idea what Picard was going to look like.

At any rate, we turned in the first-draft script and waited a couple of weeks for the notes — heard nothing, called the TNG office, and discovered that we had been “cut off” at first draft, and the script given to someone else for rewrite. This happens sometimes in TV, but rarely when everybody in the office is so enthusiastic about the story in its earlier stages.

We were unclear about the reasons for this particular cutoff for a long, long time — nearly ten years. The excuse originally given us was “time considerations” — meaning that the production office was under enough time pressure that it was felt easier and quicker to fix the script in-house rather than giving it back to us. But ten years later we found out that this hadn’t really been the issue: instead, we’d unwittingly become caught up in interoffice politics. One member of production staff got up another one’s nose, and as a result was chucked out — and (though they weren’t told what was going on) so were all the writers associated with that production staffer. Our script was then handed to another person for rewrite (and it became a source of considerable amusement to us when it turned out that a script which took us two weeks to write, took the replacement “writer” six weeks to rewrite…and the job he did was considered to be so slow and poor that it was later cited as a reason that he should be fired.)

At any rate, after the rewrite, in the shooting script for the episode, only two elements of our original (besides the general idea) remain: the scene with Picard and his mother (which was Michael’s), and the shot of Picard almost falling out of the turbolift into open space (which was mine: other alert readers will probably have recognized an idiom from the “Door” books there — in this case, Picard having an intimate and scary run-in with the Door into Starlight).

When Michael and I did see the shooting script, while our families were vacationing together in England in the late summer of ’87, our reactions were, uh, mixed. We thought we’d had a pretty fair story without the addition of aliens in pajamas and genius children. (Also, please note that neither of us had anything against the Wesley Crusher character.) However, at that point both of us had enough TV work under our belts, of one kind or another, to (after the initial reaction) sigh, shrug, say “Oh well, they paid us…”, and move on. Michael got busy with other projects (many of you will now have seen or heard of his work on BATMAN: THE ANIMATED SERIES, GARGOYLES, and various movies-for-TV: I went on to live-action on the European side, for the BBC among others, and just had a miniseries come out.

Nonetheless, I think Michael and I still wonder sometimes: what would it have looked like if they’d shot what we wrote?…

(A few more thoughts about behind-the-scenes events during that first season, and a discussion of what else the word “notes” means to a TV writer, are here.)

ST:TNGStar TrekStar Trek: The Next GenerationWhere No One Has Gone Before
8
FacebookTwitterTumblrEmail

Surrender now or I shall unleash my war-hound.

How about instead, I strip all straight white male content from the show. We've seen plenty of that already, anyway, and I think they may be polluting the show. Don't ruin my mood. https://twitter.com/lexxlexxsmith/status/1528923435354800129