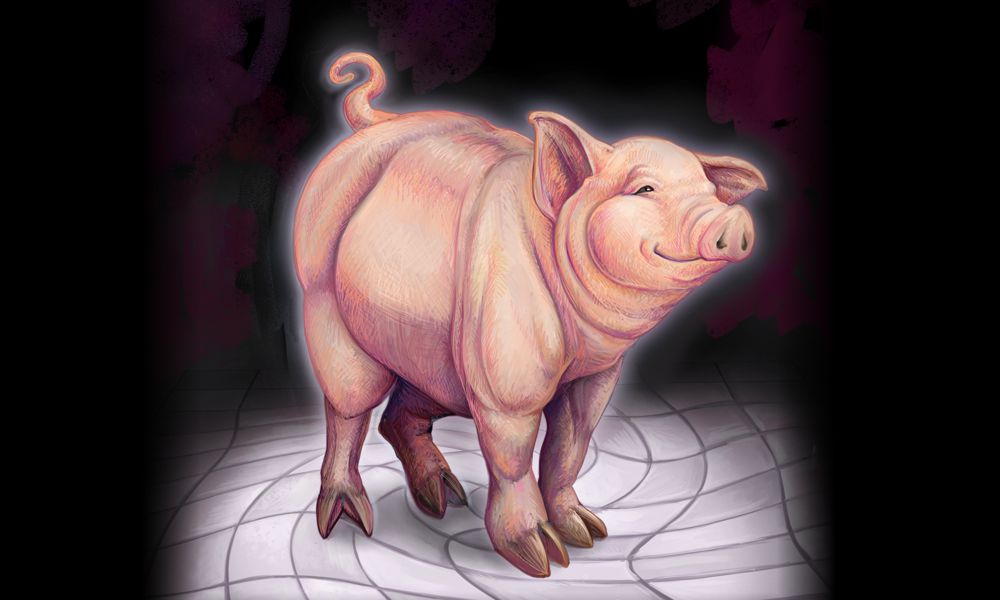 Comments here, in the quoted parts, from a friend:

“So the Pig is one of those characters that just waits on the sidelines for a good book to wander into whether he was meant to or not? 😉 ”

The Pig would say, “That last requires a definition of who’s doing the meaning…”

“No wonder you get writers complaining about their characters running away from them.”

(snort) I wouldn’t be one of those as a rule. I’ve said it before: if a character routinely shows an inclination not to do as they’re told, to the point where their actions threaten to derail a carefully designed plot, I kill them. Plotting is mine, saith Me: I will handle it — and I expect my characters to “understand” that I have their best interests at heart, even though it may not look like it at the time. They start getting disruptive, I return them to the Creativity Pool and tell them to find some other author. We’ve got work to do here.

That said: “sidelines”, in the sports idiom, are exactly where some of my characters are. I usually have one eye on players who haven’t yet entered the game, as it were, and I’m not above one of them sidling over to the manager in the dugout, also as it were, and whispering, “Boss, come on, break the lineup and let me bat after him…” If I can be convinced that it’s a good idea, sure, why not? — as long as the main thrust of the through story is assisted.

I’m not going to add spoiler protection on what follows, except to suggest that people who don’t want to know one way my characters get developed should probably refrain from reading it.

Flash back to June of 2000. Sometimes, when circumstances at home haven’t been quiet enough for writing to get done in a timely way, I take off for a week or so with the portable to be by myself with the work. We have a friend in Switzerland who has a small studio apartment in a remote spot on Mount Rigi, and for a nominal charge to cover heat and power and resort tax and so on, one or the other of us can catch a cheapo flight via Ryanair (with a change to Easyjet) to Zurich, catch the train downcountry and up the mountain, and go hole up there in perfect quiet and just get on with it. 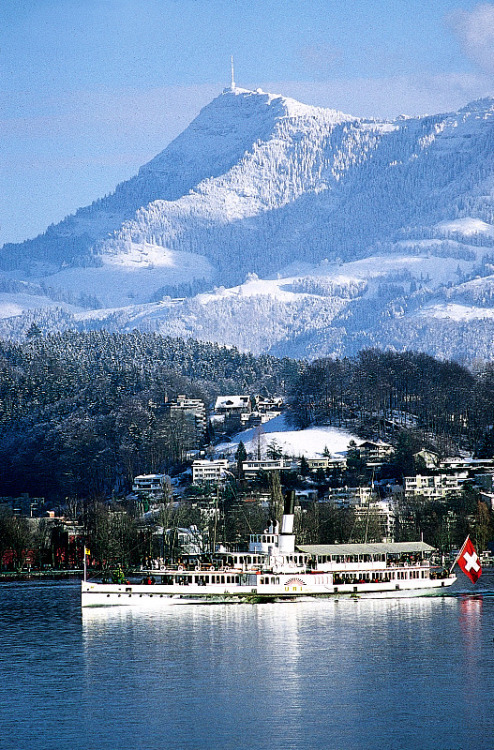 It’s a great spot. There are no roads. There are no cars. (That trip I got to see one of the neighbors having their newly-cut hay brought down the mountain by helicopter.) There is no phone in the apartment (though on top of old Rigi is a massive candy-striped cellphone mast with so many emitters on it that it ought to be possible to receive calls on one’s fillings, and the Nokia connected to the portable [in the days before wireless broadband] made it possible to pick up the e-mail and send off completed files anyway.) It’s absolutely quiet up there, and all the views are wonderful, especially the southern one (see The Wizard’s Dilemma p. 129 for a slightly reworked view of the Alps as seen from the Vierwaldstätersee area). There are no distractions. You can even order your groceries online from Migros (formerly LeShop.ch, though the domain has been retired) and have them delivered to the local post office/train station for you to pick up.

But for stuff like milk and bread and fresh vegetables and so on it’s silly to do that. After a day or three of hard work the urge to get out a little further than the apartment’s terrace gets strong, and besides, you need fresh bread…and Swiss bread is the best in the world…so you grab a shopping bag and walk down the paved footpath to the dorfladen or village shop in Rigi-Kaltbad, about half an hour’s walk down the mountain, and then (if you’re a lazy thing like me) avoid the climb back up by catching the little cogwheel Rigi-Bahn train back to the apartment.

Rigi-Kaltbad is where I was when the Pig ran into me.

I have to write carefully about this, because people are prone to misunderstand it. After forty years of this work, I’ve found that — for me at least — there are modes of creativity which can briefly overlay the normal senses, so that things that genuinely aren’t there except in your imagination seem for a few moments to coexist with things that have what passes for physical existence. It doesn’t qualify as hallucination, since never for more than the initial split second of surprise are you in any doubt that what you’re experiencing is an internally sourced artifact of the making-it-up process. It’s not a state that can be induced or forced. And it’s not invariably useful. Sometimes it’s just funny, your brain making a visual or aural joke to break the tension. Sometimes it turns out to have been helpful after you’ve figured out to what use the data or suggestion can be put. It’s never to be taken as gospel, but it’s always something to pay attention to when it happens, which for me isn’t all that often.

So I’ve done my shopping and got my bread and milk and so on, and it’s going to be about another hour and a half before the train comes through. Scene-setting here: Rigi-Kaltbad is all one steep hill. It’s a small resort — I guess from the name there must have been a little  spa up there at one point or another — and has a number of good small hotels. One of them, the Hotel Alpina, is right by the train station, which is literally only a place where the track briefly becomes flat so that when the train stops, people can get in and out without immediately falling either uphill or downhill. The nearest hotel is set at a right angle to the tracks, directly across from the station building, and the front of it, one story up, has a narrow terrace restaurant. 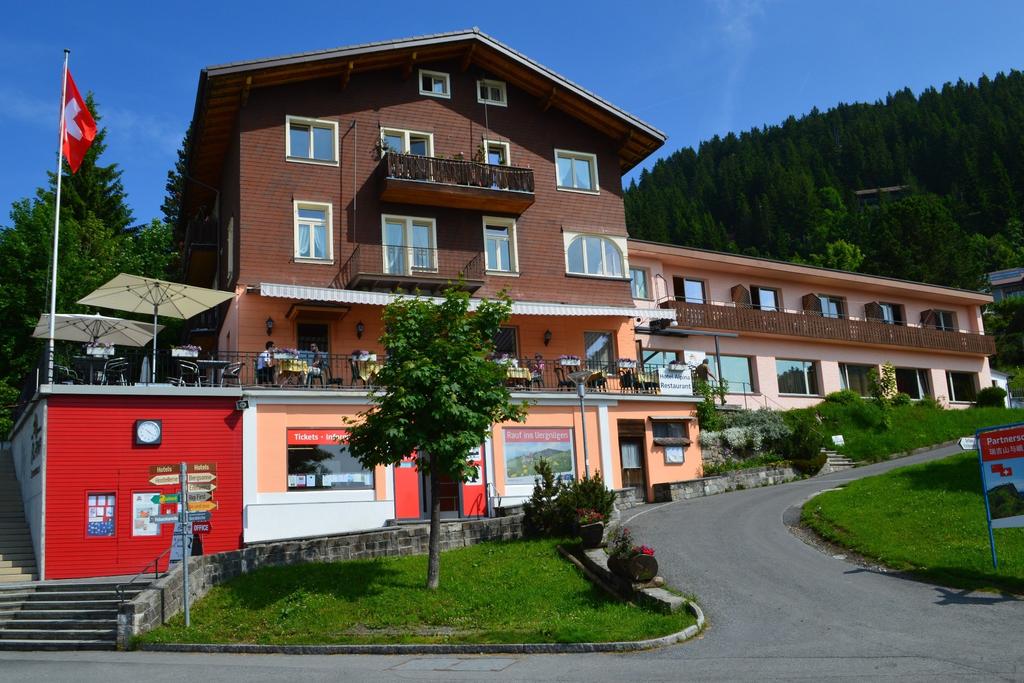 This is the best place to wait for the train, since if you’ve paid for what you’ve had, all you have to do is walk down the outside stairs and walk across the tracks to board. I went up there and had a salad and a couple decis of white wine. Nice day, warm, sun leaning westward, the lesser of the two views showing to the north — Luzern, and the Jura in the distance. When lunch was done I pulled out the pad I always carry with me up there (the laptop was locked up in the apartment) and started to go over the remainder of the Dilemma outline and the beginning notes for the broad “arc” outline for the next three books. There were some details that were evading me.

I kept getting distracted. The day was gorgeous. The surroundings were gorgeous. The restaurant manager, waiting tables, let me alone except to bring me a little more wine and to pause by me briefly to deadhead some petunias in the nearby windowbox hanging over the railing. I stared at the train station for a while, and the building site to the left of it where they had finished tearing down the century-old hotel there and were rebuilding it on the same site, and then I turned my attention to the pad again.

Pad. Pen. Red and white checked tablecloth. Something standing beside the table. White. A pig. A large pig, its back at nearly the same level as the table.

“You never come see me any more,” says the Pig in a voice partaking about equally of Milton Berle and Harlan Ellison. “You don’t even call.”

The next second contains the following thoughts, in more or less this order:

“You come here often?” I “say” to the Pig, since I feel it’s rude to treat one of these visitations entirely as if I were making it up. Then I laugh. Dumb line.

He laughs too, and he’s gone. Reality, such as it is, reasserts itself in toto. But I’ve been reminded of something I hadn’t thought about in a while. I think about it. Some ideas start to arrange themselves in configurations they hadn’t been in before. These look like much better configurations than the earlier ones. I start making notes. The train comes. I ignore it. I ignore the next one. And the next. I finally catch the last train up, around the time it gets too dark to write.

When I get home I check my own reference to the Pig, and check the one in Barry Hughart’s BRIDGE OF BIRDS. I do a big old web search and another search at the main library at Trinity, and find hardly anything. Through a mutual acquaintance I get in contact with Hughart (who never made any use of the character beyond the one throwaway reference) to see if he knows anything more about the Pig. He gets back to me in due time and adds a little info from another source besides the Larousse, a large work on Chinese mythology, but there’s really very little data, and nothing to prevent me going in the direction I’m heading already.

So I write the Pig my way.

…In the original posting, what followed would have been spoilery: but Dilemma has been out a long while now. As matters evolved, it became obvious why the Pig got involved (and indeed needed to become involved) in the Wizard’s Dilemma storyline (and not before: and why he was going to step in again, if briefly, during Wizards at War).

…And why we are not done with him yet. But that’s all I’m going to say about the subject at the moment. 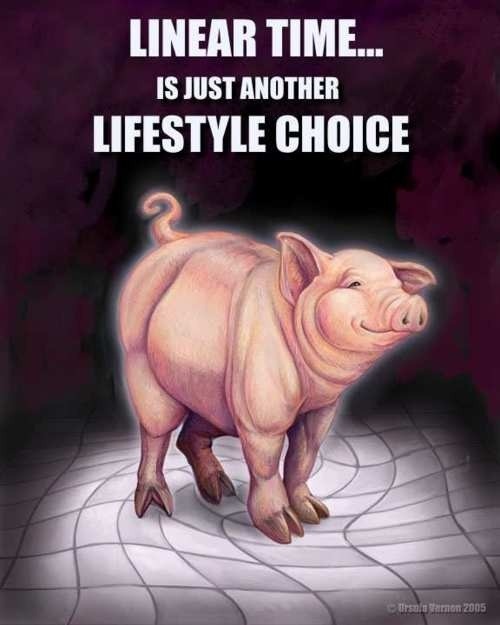 Not a lot of blogging for the next few days