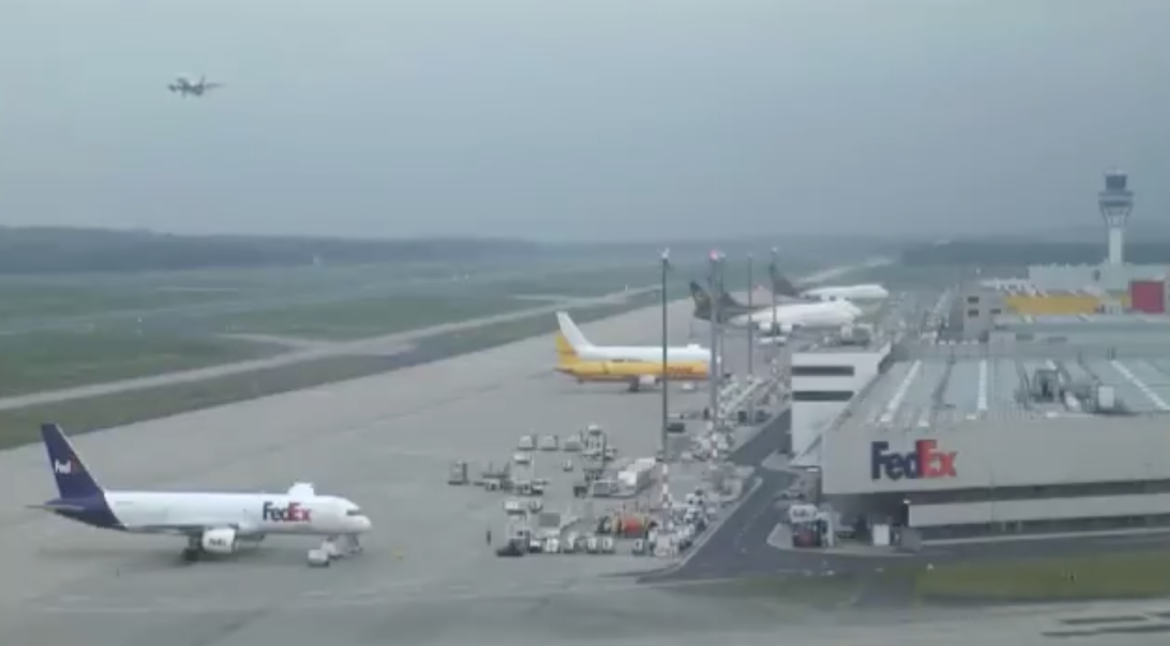 The slang term “Angles and dangles” is probably best known from its usage among submariners. Among them, it describes the deep-dive and steep-ascent maneuvers performed by a sub at the start of a mission, to discover whether anything’s going to fall down when you do that. Items that fall down on these mini-dry runs are then made secure, so they don’t do the same thing some time out in the deep water when a submarine needs to be quiet. (Or so they just won’t fall down, which is understandably a nuisance.)

However, pilots use this slang too, with a different meaning. Among certain segments of the flying fraternity (particularly RAF-based ones)(like the one whose office is upstairs…), “angles and dangles” usually means flying repeated landing-and-takeoff practice runs in an aircraft. (Terminology also used: “touch and go,” “circuits and bumps.”) You land—just barely, sometimes just touching wheels to tarmac for a second or two—then take right off again. Climb and turn right, then right, then right, then right again onto approach, and land again. Then rinse and repeat, over and over—with your gear hanging down all the time—until your instructor (or whoever’s checking you out on the routine) is pretty sure you’ve got the hang of it.

Most of the time, these days, this process happens in the flight simulator… but eventually you have to go do it for real. I’ve seen it—Peter and I wound up one time sitting at the end of the active runway at Prestwick Airport in Scotland on the way to or from some other errand, watching someone do these in a 747—and the first few times, it looked like fun. I imagine it got old pretty fast for the pilot after that.

Anyway, normally the Angles and the Dangles are one smooth process. It isn’t often you get to see them so far separated from one another. But that happened last night, and we watched it unfold live (and with a certain amount of tension) via the wonders of the internet.

At some point during the evening, this popped up on my Twitter timeline from the Airport Webcams feed:

LIVE / INCIDENT: Lufthansa #LH434 Munich to Chicago (Airbus A350-900 D-AIXK) turned back over Scotland and appears to be returning to MUC. Reason not yet known. Track: https://t.co/GTfI9qEvi9 @flightradar24 pic.twitter.com/dXGKqeO0JC

That got my attention immediately. Both the German airports involved (as one besides Munich gets caught up in the story as it unfolds) are ones Peter and I know well, because they’re two of our preferred (continental-)European gateways: Köln/Cologne-Bonn (CGN) because of its direct access from Dublin via Eurowings (and extremely simple access to the German national rail system, as the train station’s right in the airport), and Munich/Franz Josef Strauss (MUC) because it’s close to a city where we do business and have good friends (and is also home to possibly the best airport restaurant in the world, because, go ahead, name me another airport that has its own beer hall and microbrewery with outdoor beer garden). And Lufthansa is an airline we both like a lot. And most to the point, that plane, headed for Chicago, was almost certainly pretty full of my people.

So we settled in to keep an eye on things. Early on in the process, it was hard to tell what was going on. The aircraft had gotten as far as Scotland… and then turned around and headed back toward Germany. 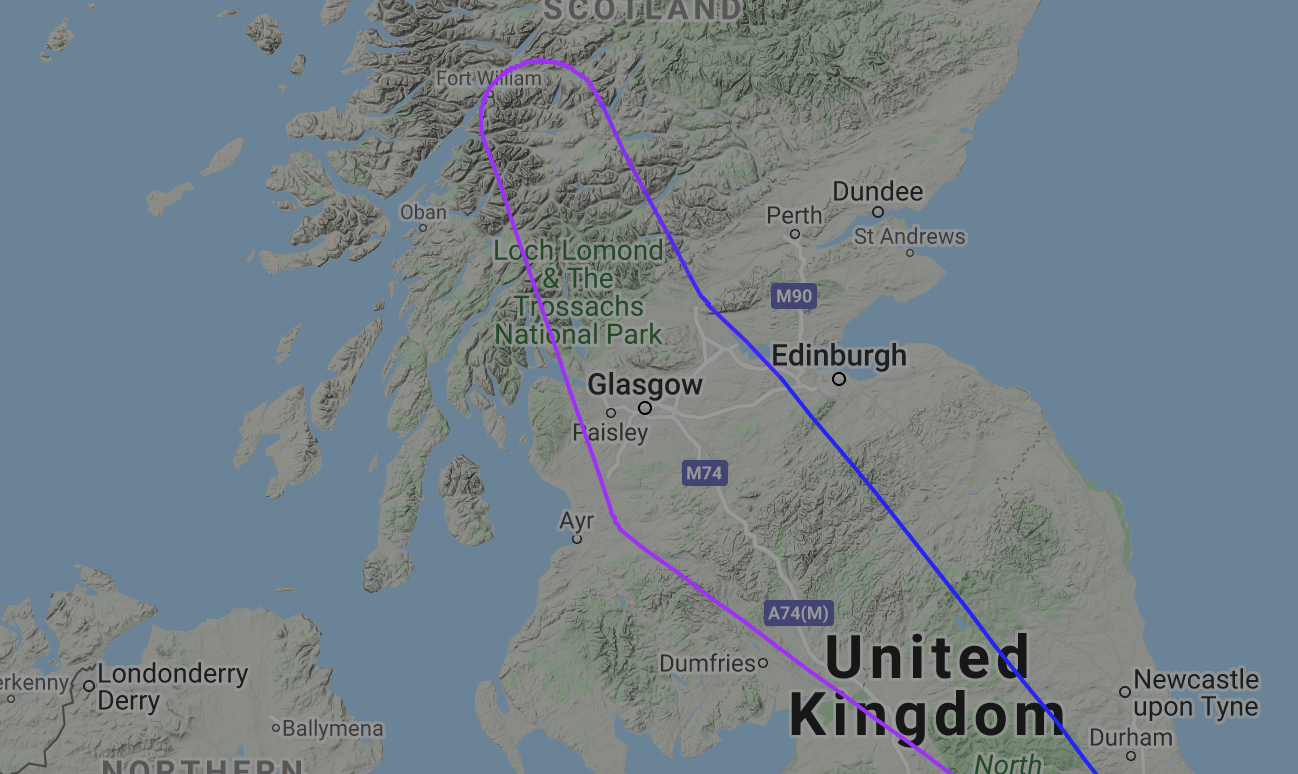 Okay, that was concerning, and a bit odd. (Not least because the aircraft had not declared an emergency of any kind.) But then the plane passed near CGN, and its flight path produced… this weird little loop. 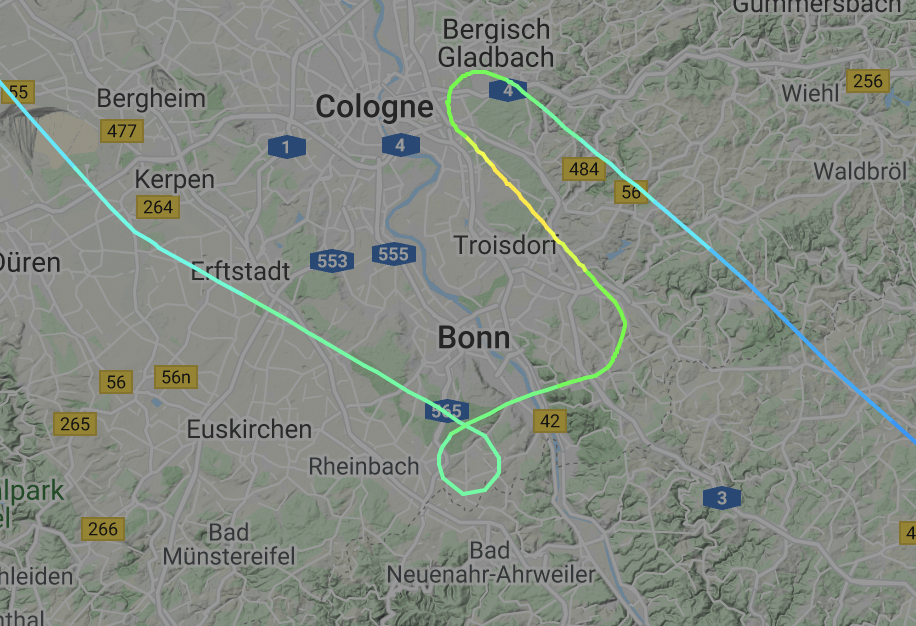 Peter looked at it, and looked at that drop-down and climb (the yellow bit of the track above) and at the plane’s altitude at the low point (2000 ft), and immediately said: “Something’s going on with their landing gear.”

…And it turned out that’s just what was going on. We didn’t know at the time, but when LH-434 took off from Munich, it blew a tire on takeoff (and we know this because MUC airside crew found pieces of it on the runway). MUC then contacted LH-434, and the pilots made the decision to return to Germany. (Though not to MUC, as we now know… because MUC’s second runway is being repaired, and landing a possibly damaged aircraft on it would have required at the very least closing that runway to all other traffic for some time. Not a viable option: even in mid-evening, MUC is pretty busy.)

The next move was to find out just what state the landing gear were in. So the pilots and the ground had a chat, and then chose a less-busy regional airport where they could do a tower flypast and let someone get a look at the gear. They wouldn’t have wanted to take too long over this, as sunset was past and they were already getting into nautical twilight at that point; visibility would be dropping off fast. Finally they chose CGN as the best candidate for this operation.  So here you can see them doing just that: a slow flight past the tower for inspection. 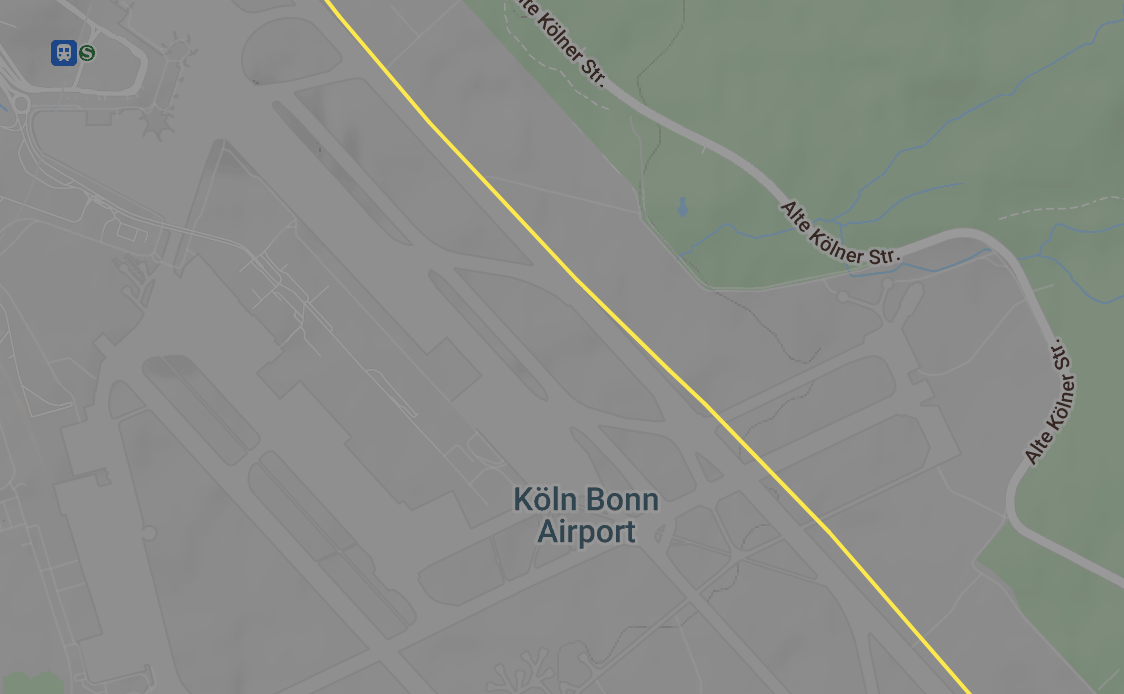 Someone also caught some video of LH-434 as she passed through. You can see a bit of the flypast here.

VIDEO/INCIDENT: Lufthansa #LH434 Munich-Chicago (Airbus A350 D-AIXK) turned back over Scotland at 1600UTC, made a gear down, low pass at Cologne & is now burning fuel for a return to MUC. Reason not yet known.https://t.co/GTfI9qEvi9https://t.co/e9lQglEKgb
(c) Cologne Airport pic.twitter.com/tz2Ma488Q3

What the people in the tower at CGN saw there’s no telling (as yet), but regardless of the state of the gear, the aircraft had a problem. It was carrying enough fuel for a transatlantic flight, and at least some of that had to be disposed of before landing, by flying it off. So LH-434 was then dispatched to one of the holding-pattern areas near MUC, and got to fly around and around and around and AROUND until the passengers were doubtless seriously over it. (And over the delay. And over the perfectly understandable tension of not knowing what was going on with their plane’s landing gear, and how that might affect their landing. I’ve had one or two of these incidents, and they’re not conducive to a stress-free flight.) But anyway: angles. So many angles. LH-434 was in that pattern for the better part of an hour. 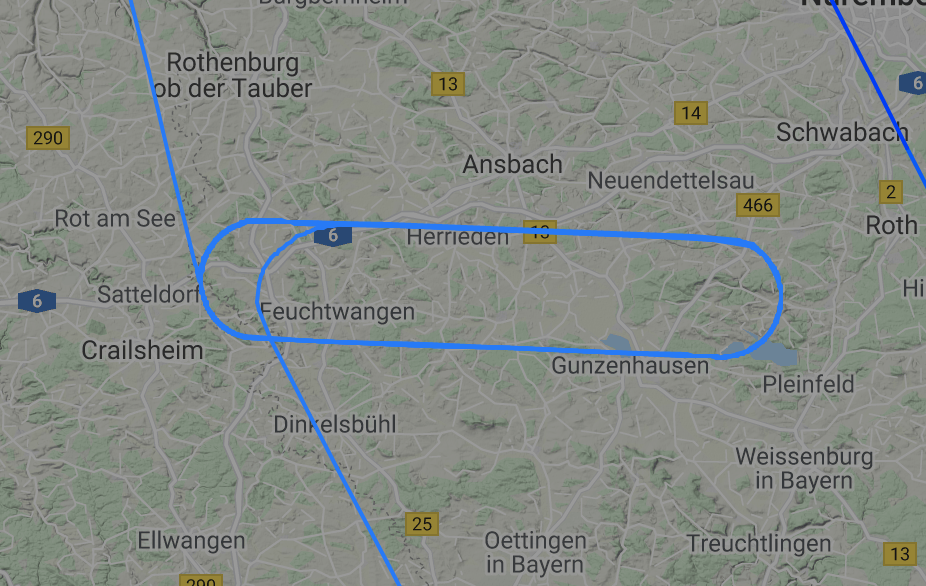 Finally, just before 2200 UTC, the pattern broke and LH-434 headed northwest toward Frankfurt/FRA, Lufthansa’s midlands hub. There was a bit more wiggling around before she turned base leg for final approach and at long last settled safely in, a little before 10:30 PM local time. 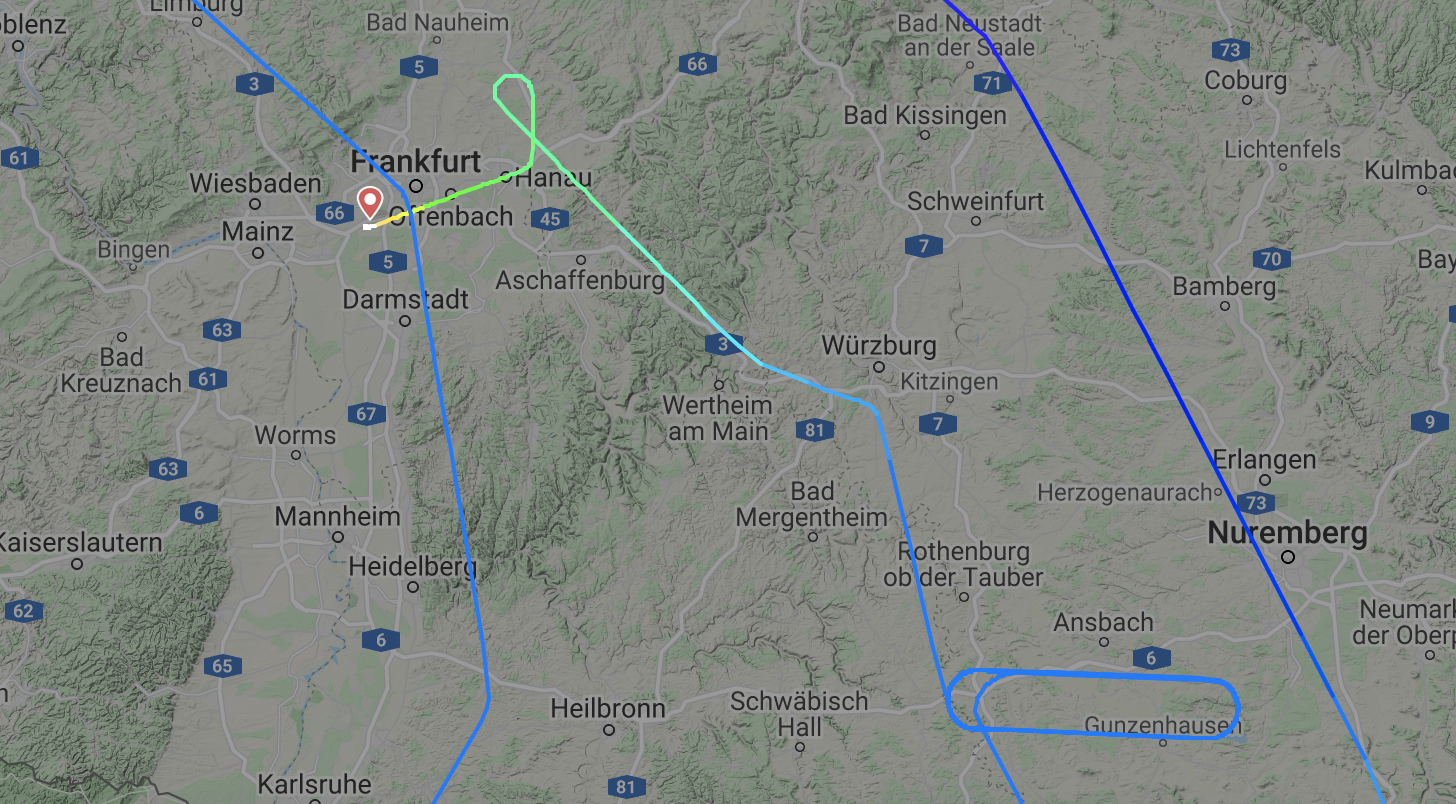 …I doubt we were anything like as relieved as the passengers on board were. But we were definitely relieved.

So meanwhile: here’s a translation of a report on the proceedings (thank you, Google) from the story at the Kölner Stadt-Anzeiger newspaper.

A Lufthansa Airbus made a rather unusual low-level flight over Cologne Airport on Wednesday. Due to technical problems, the machine that was en route from Munich to Chicago had to turn back via Scotland in the direction of Cologne.

When the Airbus A350 took off from Franz-Josef-Strauss Airport at 4 p.m., a tire was damaged. As Lufthansa confirmed to this newspaper, parts of the tire casing were found on the runway that could undoubtedly be assigned to the machine.

The crew was only informed of the incident via Scotland, two hours after the start in the Bavarian capital. In order to assess the damage, the pilot decided to carry out a so-called visual inspection. A case for the Cologne ground crew.

The pilot of the Lufthansa plane (LH434 / DLH2C) headed for the Rhineland, flew low over the runway at Cologne-Bonn airport with the landing gear extended, so that the experts on the ground could get an idea of ​​the damage could do.

The machine then turned towards Munich, an immediate landing was not possible there, as only one runway is currently available due to repair work. After the unscheduled landing, the runway would have had to be searched again for remains of the tires and then closed.

Therefore, according to Lufthansa, the flight was diverted to Frankfurt Airport, the largest base of the German airline. There the Airbus landed safely with its 190 passengers around 10:20 p.m.

The odyssey took the passengers around six hours to fly from Munich to Frankfurt am Main. As a rule, a direct flight from Munich to Chicago takes a good nine hours.

…So there you have it: a happy ending to a somewhat unnerving story. What a relief.

I don’t know how long FlightRadar24 caches flight info, but for the moment you can find the full flight track of LH-434 here.

…ETA: A little additional info in this blog posting at FlightRadar24.com, as well as confirmation that the passengers were put up overnight at or near FRA and will be flown to ORD today. (Which is good, because frankly if I’d been on that plane, I’d sure have preferred to get off and have a meal and a sleep before getting on another one…)