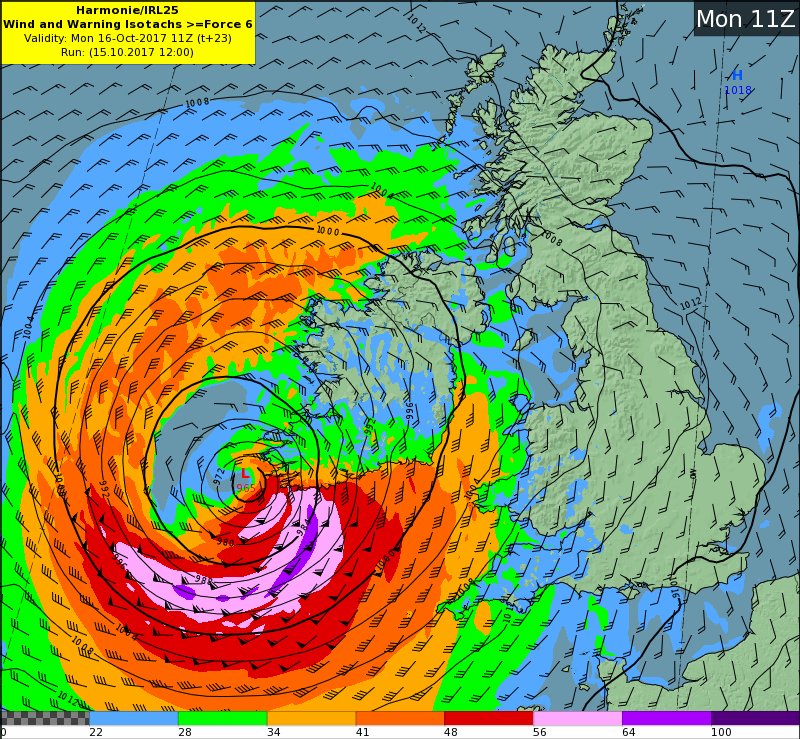 It’s going to be an interesting day. (I leave aside the local confusion over whether to properly refer to this storm “Hurricane Ophelia” or “Ex-Hurricane Ophelia.” Never mind: here she is, not so much emitting snatches of song as gusts of wind, and strewing leaves all over everything instead of flowers.

This is as much a status report as anything else (and I guess I can update the post over the course of the day if anything interesting happens locally, though mostly I’ll probably be on Twitter, using the #Ophelia hashtag, like a lot of the rest of the country. If I fall silent there it’s more likely to be due to local power loss than anything else, and I’ll let everybody know as soon as possible before the fact — our broadband is cellular and runs on batteries, so even after a power failure I’ll still have network access for a good while.

This is also to reassure people who might routinely follow me and be concerned. Peter and I are not in the direct storm track. The track as presently projected calls for Ophelia to head up the west coast of the country. Peter and I live in one of the easternmost counties, Wicklow, close to where it borders on County Kildare.

Nonetheless the whole country was last night tagged by Met Eireann, the Irish national weather service, as a Red Weather Alert area, the warning being for “Violent and destructive gusts of 120 to 150 km/h countrywide and in excess of these values in some very exposed hilly and coastal areas.” As the storm is big enough to span the entire island, we’ll naturally be feeling its effects over on this side.

As I write this (0950 UTC) the northern fringe of the storm has made landfall in the southwest of the country and nearly 100,000 people have already lost power. In that part of the world, flooding is also going to be a huge issue (as it routinely has in the past with lesser storms), and we’re all watching that situation with a lot of concern. The storm surge is also going to be problematic on both the west and east costs, with a strong south wind coming up the Irish Sea this afternoon and evening, pushing sea levels up by as much as a meter in the storm surge period.

In our own area, the forecasts right now seem to indicate that a fair amount of rain will fall over the course of the day (40-50mm) but most of the trouble is going to be caused by high winds bringing trees down — especially since the trees still have a lot of leaves on them, even here on the high ground — and people losing power. This happens to us at least once every couple of years due to storm/wind damage in this very rural area, and we’re well prepared for it.

Let me reassure everybody who might be concerned that, based on previous experience of long periods of much heavier rain, our house is in no danger from flooding. We are about fifty miles west of the Irish Sea. Our cottage  sits on high ground, more than 120m / 400ft above sea level and in an area of quite “sharp” drainage. Slopes here are acute enough so that even in the wildly unlikely case that the ground around us gets saturated, what water can’t sink in will run off downhill.

My main concern at the moment is about the line of very tall and handsome, and old, beech trees in the estate property across the road from us. Every now and then one of them says “That’s it, I’ve had it…” and falls over when the next big storm hits it. Those trees are just tall enough to hit our house if the storm put too much strain on them… and there’s no way to tell when this is going to happen. All the warning you get (as in a previous year when a tree in the neighboring field pulled this stunt and took the nearest power line down) is a loud rushing noise reminiscent of a sound clip from a recording of a large waterfall, and then a dull THUMP. Believe me when I tell you that my ears are going to spend the day being cocked for that waterfall-y “whooooooosh” sound. Additionally, since our broadband is cellular and subject to network overload or interference by bad weather, especially rain, it means checking every now and then to make sure we’re still getting bandwidth.

While all this goes on, my work day will be progressing as originally planned: updating the backups on my main work computer and doing other file-organization-related scutwork. This is actually a perfect day to be doing this kind of thing, as it requires no creativity whatsoever. (Writing isn’t going to be possible for me until this thing passes over: there’s no way I can get settled into serious work while also constantly listening for whoooooshTHUMP.) Anyway, if you want to cheer me up while I’m trapped in this godawful drudgery, feel free to stop in to the Ebooks Direct store and grab yourself some reading material.The store has an app that makes my iPad go “kaching” when someone makes a purchase, and if it does that every now and then I won’t have to keep checking to see if the broadband’s still working.

Meanwhile the national broadcaster Radio Telefís Eireann / RTÉ has (on its RTÉ 1 channel) gone over to continuous all-news format to cover the storm, with reports constantly coming in from around the country. Those of you who’re interested may be able to access video and/or streaming coverage at this URL for the RTE Player. Also, RTÉ Radio 1’s daytime shows will (if I’m guessing correctly) be all about Ophelia.

Anyway: everybody who’s tweeted or mailed me with messages of concern — thanks! We’re as ready as we can be: we’ll see what happens next…