Borges and the Peryton
The Martini Rant
At the Young Wizards end of things: an...
2021 Hugo nomination eligibility: the Young Wizards series
Maluns
Owl Be Home For Christmas
Vintage Scots Christmas recipes: “Good Fare Christmas”
From the Young Wizards universe: an update
Irish life: The things you don’t discuss, Halloween...
Q&A: Why is my Malt-O-Meal lumpy and how...
From the Baking-While-You-Write Department: Spicy Apple Pie
Peter Morwood on Moroccan preserved lemons
Greek mythology, feminist reclamation of lost/ancient tradition, and...
Changes coming at YoungWizards.com: your opinion(s) solicited
Outlining: one writer’s approach
A project in progress: translating “La Patissière des...
IrelandRural life

This came up on Tumblr some years back, at the end of a lively thread that featured this exchange: 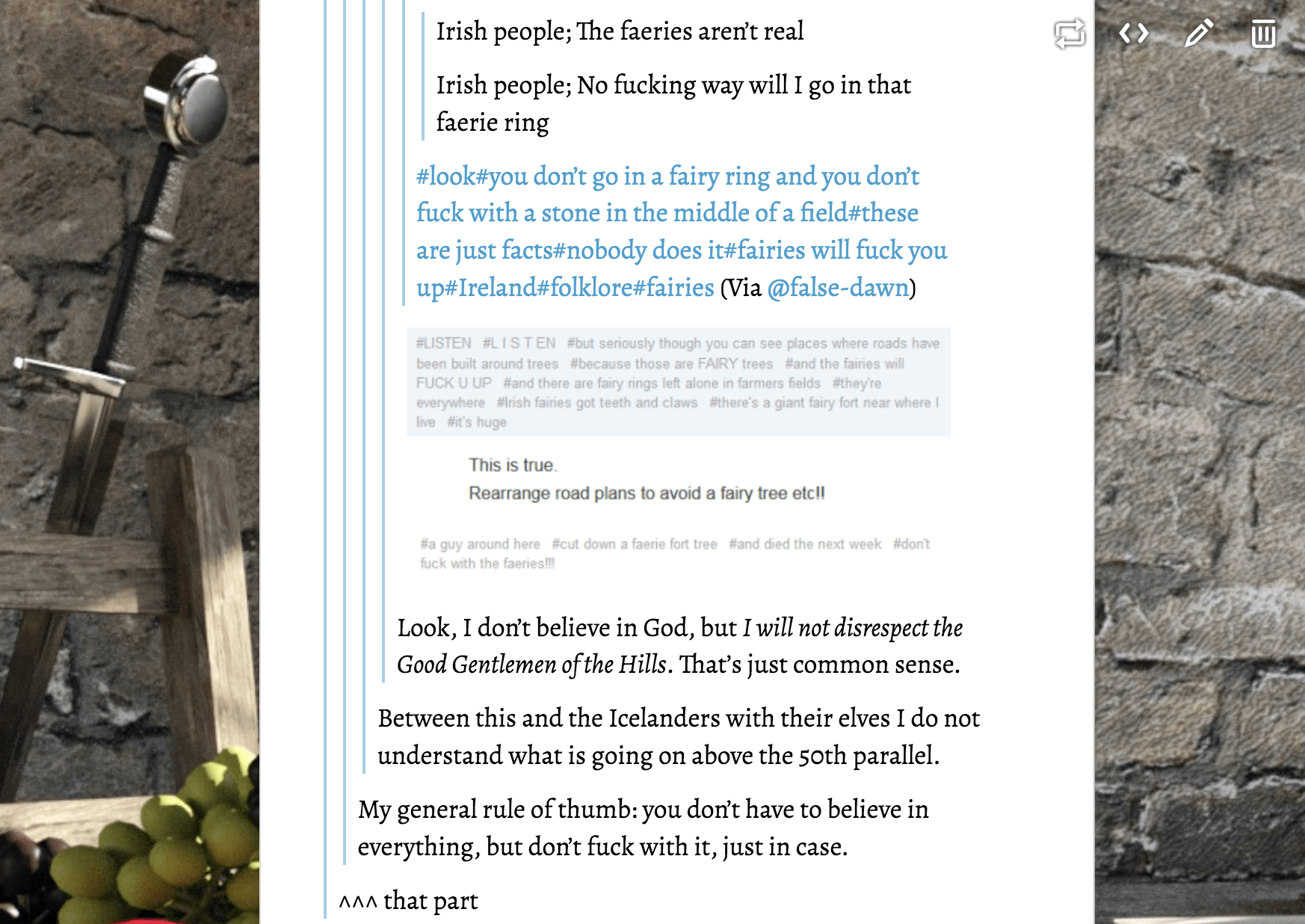 At which point I could only add the following (which comes up for consideration again, as usual, this time of year):

Let me tell you what I know about this after living here for more than thirty years.

This is a modern European country, the home of hot net startups, of Internet giants and (in some places, some very few places) the fastest broadband on Earth. People here live in this century, HARD.

Yet they also sometimes get nervous about walking up that one hill close to their home after dark, because, you know… stuff happens there.

I know this because Peter and I live next to One Of Those Hills. There are people in our locality who wouldn’t go up our tiny country road on foot on a dark night for love or money. What they make of us being so close to it for so long without harm coming to us, I have no idea. For all I know, it’s ascribed to us being writers (i.e. sort of bards) or mad folk (also traditionally thought by some to be in some kind of positive relationship with the Dangerous Side) or otherwise somehow weirdly exempt.

And you know what? I’m never going to ask. Because one does not discuss such things. Lest people from outside get the wrong idea about us, about normal modern Irish people living in normal modern Ireland.

You hear about this in murmurs, though, in the pub, late at night, when all the tourists have gone to bed or gone away and no one but the locals are around. That hill. That curve in the road. That cold feeling you get in that one place. There is a deep understanding—rarely if ever more clearly articulated—that there is something here older than us, that doesn’t care about us particularly, that (when we obtrude on it) is as willing to kick us in the slats as to let us pass by unmolested.

So you greet the magpies, singly or otherwise. You let stones in the middle of fields be. You apologize to the hawthorn bush when you’re pruning it. If you see something peculiar that cannot be otherwise explained, you are polite to it and pass onward about your business without further comment. And you don’t go on about it afterwards. Because it’s… unwise. Not that you personally know any examples of people who’ve screwed it up, of course. But you don’t meddle, and you learn when to look the other way; not to see, not to hear. Some things have just been here (for various values of “here” and various values of “been”) a lot longer than you have, and will be here still after you’re gone. That’s the way of it. When you hear the story about the idiots who for a prank chainsawed the centuries-old fairy tree a couple of counties over, you say—if asked by a neighbor—exactly what they’re probably thinking: “Poor fuckers. They’re doomed.” And if asked by anybody else, somebody non-local, somebody you don’t know… you shake your head and say something anodyne about Kids These Days. (While thinking DOOMED all over again, because there are some particularly self-destructive ways to increase entropy.)

Meanwhile, in Iceland: the county council that carelessly knocked a known elf rock off a hillside when repairing a road has had to go dig the rock up from where it got buried during construction, because that road has had the most impossible damn stuff happen to it since that you ever heard of. Doubtless some nice person (maybe they’ll send out for the Priest of Thor or some such) will come along and do a little propitiatory sacrifice of some kind to the alfar, belatedly begging their pardon for the inconvenience.

They’re building the alfar a new temple, too.

Atlantic islands. Faerie: we haz it.