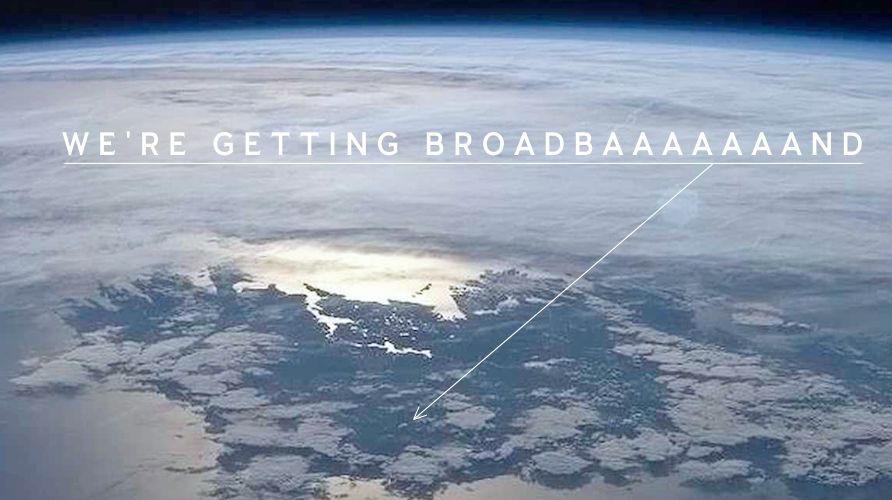 We’ve been living in rural Ireland for a shade more than thirty years now, and the household’s online connectivity has been a bit of a challenge from the very start.

When we first arrived, the only way into online life (then mostly CompuServe and AOL and MCIMail) was dialup, and it was what everyone else here had, so that was all right as far as it went. (Sometimes this could get a bit exciting, and could wind up involving alligator clips. I remember going up to the Telecom Eireann offices in Dame Street — that building houses a Starbucks now — and showing the techs how to finesse this. Remind me sometime to tell the tale of how I almost wound up storyediting an animated series from Scotland, more or less entirely on MCIMail, with those alligator clips hooked into a phone line in a castle wall.)

Then the Internet started to become accessible, and for that too there was dialup, slow and clunky and expensive as it was. If you wanted anything better, for a long time satellite was the only way… and it was insanely pricey. (The equivalent of $250-350 per month wouldn’t have been unusual.) For a long time we struggled with that, looking wistfully forward to a time when local providers would be able to offer something like the faster, cheaper methods that were becoming available in the US and in big cities in Europe.

For a long time the providers here lagged behind, until finally in the very late 1990s and early 2000s they started to catch up. We happily enough gave up the satellite for DSL (at least a bit more reliable: the satellite had tended to get wonky in wet weather) and then ADSL. And then slowly the national phone company started to introduce fiber… though only in big cities.

We moved to our present house in the late 90s and watched other areas of the country gradually get better service and have access to all kinds of goodies that were far beyond what ADSL and its kin could provide us. Then came true hardwired broadband, and the nature of our problem abruptly changed. Our tiny local exchange, home to maybe no more than a few hundred subscribers, was too small ever to be broadband-enabled. And none of the companies that kept buying the national phone company, and passing it from hand to hand like a hot potato, had any particular interest in committing to the infrastructure spending that would pay for (among other things) running fiber out to the likes of us. We heaved a sigh, as it seemed likely that the only way we’d ever get broadband was to move. Then dialup vanished, leaving us with only one option that wasn’t satellite: cellular broadband, running off a router that would only function when placed as high as possible in an upstairs bedroom window, since our local mobile service is so funky and we live in the shadow of a hill that keeps us from getting a signal of any significant strength. And has a tendency to fail out when it rains.

To say that, as people who as part of work need to have an online presence, and who run an online bookstore, this whole situation has been pretty frustrating… would be putting it mildly.

The government here wasn’t insensible to this problem, to their credit, it being shared by hundreds of thousands of other people nationwide. As a result there ensued something called the National Broadband Scheme, intended to get the national government involved as a partner in extending broadband service to Ireland’s most rural users. This proposition started out well enough but then rapidly started going through more plot twists than a George R.R. Martin novel (and nearly as many corporate casualties, as participants fell or were pushed out of the scheme, depending on your point of view). Finally it expired of its (political and other) injuries, to be replaced by the National Broadband Plan. (Which also started to look distinctly peaky after companies began dropping out of it as if they’d drunk out of the wrong bottle at a royal banquet.) Leaving us, like many other people all over the southern part of this island, in a situation where the Moon had better internet than we did.

Yet in the most recent twist in the tale, what remains of what used to be the national phone company — an entity now called Eir — swooped in and creamed off some of the most accessible of the rural routes that the Plan was supposed to see equipped with the very best state-of-the-art, fiber-to-the-door broadband.

And by what can only be considered sheer luck, one of these involves the little rural road we live on! A man in a van came and discussed with us what service we wanted, and gave us a contract to sign, and we signed it. And when he left there was singing and dancing around here that could have been confused with something out of an old Savarin commercial starring their picky coffee expert, known as El Exigente. “And the people are happy!” Cue the mariachi band.

The very thought of at last being able to do the online things other people do — streaming (impossible with our expensive cellular broadband, which has been our last-resort solution for years now), seeing video content from online providers (bwahahahahaha you must be kidding, we’d burn through a 20-gigabyte / $50 cellular topup in a matter of hours), backing up our computers to the cloud…  It was heady stuff. So many useful possibilities that other people take for granted would at last become available to us.

Except… maybe that excitement was a little premature.

Yes, people came along with backhoes and ran new cable pipes down the road, and then came the fiber itself. And we actually thought we were going to get hooked up last August until a pre-installation surveyor came around, took one look at our utility pole, and said “Nope.” After a week or so, the pole was pulled up and replaced with a new one. Then a nice gentleman came and ran the fiber up it, and another nice gent came to install the cabinet at the top. But as far as the final stage, actually getting the fiber into the house? Nothing definite. “Maybe before Christmas.” Except… sorry, nope. “Technical difficulties.” The week before Christmas, we called the customer service people and said “WHEN?” And they sighed and said, “February 7th.”

Ooookay. Peter and I looked at each other, and sighed too, and said, “We’ll see.”

And Christmas went by, and New Year’s, and January. And Peter said, “We’ll call them first thing on the week of the 7th.”

And he did. And the nice lad who took his call said, “Yes, you’re still on for the 7th. Morning or afternoon?”

Anyway, since we’re both in celebratory mood, there’s no reason not to spread it around. The Ebooks Direct store will be in 60%-off mode until the installer arrives here on Thursday. So if you’re after cheap ebooks, knock yourself out while you can: the present inventory will load below. (PS — if you’ve seen the Hugo-nomination reader discount offer, please wait till Friday to use it. If we try to run two sets of discounts in the store at the same time, the software has a nervous breakdown.)

And in the meantime… we wait, in hope, to join the rest of the 21st century…

2019 Hugo Nomination Eligibility: the Tale of the Five Series

Writing and C. S. Lewis’s “Law of Undulations”: some thoughts