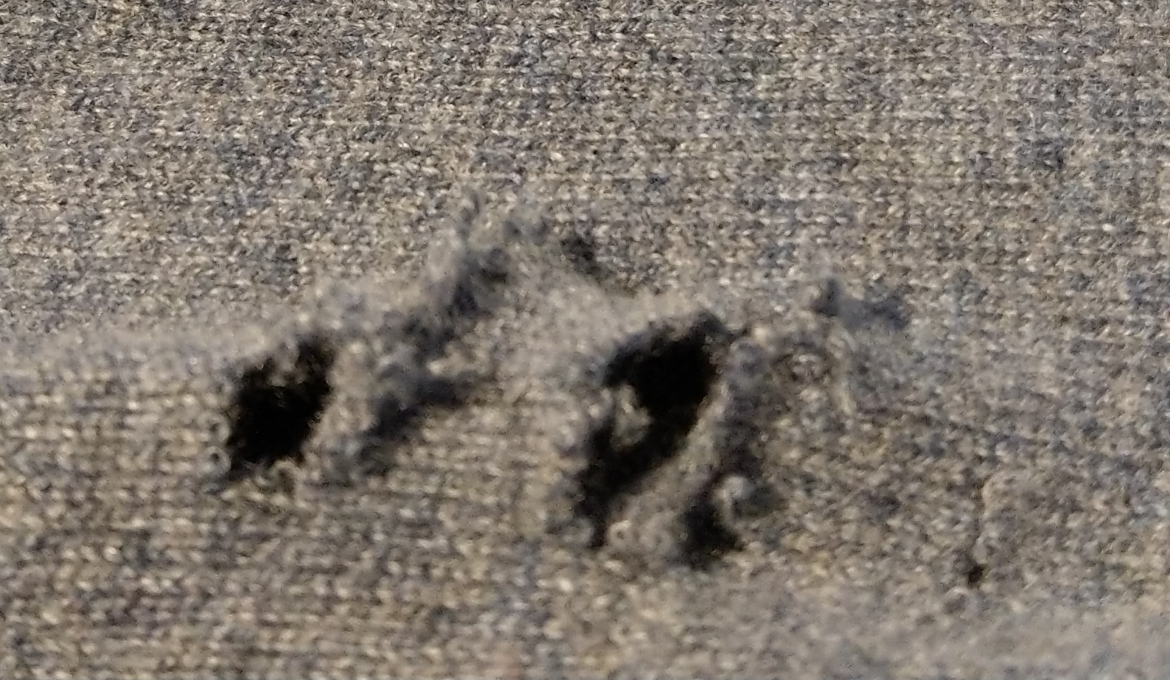 When you live in the deep countryside in Ireland, you get used to coexisting with the wildlife. This coexistence can take many strange forms: bats in the bedroom, sheep in the garden, bored racehorses hanging over the back fence to try to get the attention of the bousehold’s cats.

Sometimes, of course, what country people would classify as “vermin” are involved: foxes, rats, squirrels, weasels (actually, in this neighborhood, stoats). And mice. Lots of mice.

When you have a houseful of cats, the mice can be less of a problem. But we don’t have a houseful of cats at the moment. And inevitably, as autumn rolls into winter, one morning (or one night) you wake up to faint scratching sounds coming from the roof-space, or the attic, or from between the walls… and you mutter, “Great, we’ve got company.” And you put out traps — usually baited with bacon or a bit of a Mars Bar, but sometimes the situation requires a warfarin-based poison bait — and wait for the noise to stop. Sometimes you resign yourself to things getting locally, temporarily a bit whiffy when something dies in the walls (and sometimes this happens without benefit of poison or any intervention on our part at all). But there’s no alternative: you must take action. If you don’t do something about these critters, they’ll be into the food cupboards, chewing through the packages and ruining the food.

…So anyway, let me briefly veer off in another direction. Like most freelancing writers, we have periods of being flush, and periods of being not very flush at all, and long periods of being somewhere in between. The Flush Periods tend to coincide with the twice-yearly arrival of royalty payments from our traditional publishers. One of these happened a couple of years ago — it was Peter’s turn for the payment — and we were up in Dublin doing some errands and making some purchases we’d been putting off until money arrived. And along the way we happened to pass a clothing store, a cashmere shop in fact, that was having a Moving House sale and letting a lot of its stock go at truly ludicrous prices so that they wouldn’t have to move it all into their new digs.

In the window of this shop was something really quite lovely: a mid-thigh-length heather-blue-grey cashmere hoodie. I have to confess that I fell in love with the thing within about ten seconds of spotting it. Having then spent another ten seconds or so in a spate of tasteful drooling against the shop’s window, I peeled myself off the glass and walked away… because even though theoretically we could have afforded the thing, there were a lot of other more important things to be spending that money on. Such is life: you can’t always have what you want. Never mind, I thought, let’s do the rest of the shopping and then go have lunch.

Which we did. And then my sneaky, underhanded husband — Mr. I Signed The Official Secrets Act Twice And Butter Wouldn’t Melt In My Mouth — pretended to be going off to the restroom. When what he was actually doing was running out of the restaurant, hurrying back to the cashmere place, and buying me the hoodie. (Because it was his royalty money, and he got to say.)

Well, what the hell could I say except THANK YOU SWEETIE YOU CUNNING CONNIVING S.O.B. (Because he spent the next two days mentioning that hoodie every now and then — just to make sure I really liked it — before finally handing it over.)

Needless to say, that piece of clothing has become something of a favorite. It doesn’t get worn lots, because I want it to last a long time. It gets put on to wear at home when cozy-curl-up-in-the-big-chair-near-the-fire-with-some-tea-and-read sessions are going to happen (never for casual chore work around the house, never while cooking or washing dishes). It comes out for conventions, sometimes. (I spent a goodish bit of time in it when we were out in Bristol for BristolCon last month.) The rest of the time it spends carefully folded up on top of all the other folded-up things on my shelf of the clothes closet, because I don’t want it getting creased.

…So. A few days ago we started hearing a bit of scratching up in the attic space. Now, this could have been bats. (Which would be fine with me. I like bats, and wouldn’t hurt them whether I liked them or not, regardless of whether they were protected here under EU law… which they are. Anyway, we normally get some bats in the house over the summertime — young males looking for a nice place to shack up with a lady friend. They’re quite welcome for as long as they stay.)

So the first day we just kind of shrugged at the scratching noises and said “Let’s see what happens.” What happened was that they continued, and got louder. A lot louder. At which point the discussion changed to: “Mice or rats?” “Maybe it’s a pine marten,” I also suggested, as that kind of thing has been known to happen around here.

The noise continued, anyway, so we knew what to do: put out some baited traps and waited to see what materialized.

The first thing we found, while checking the traps the next morning, was this. 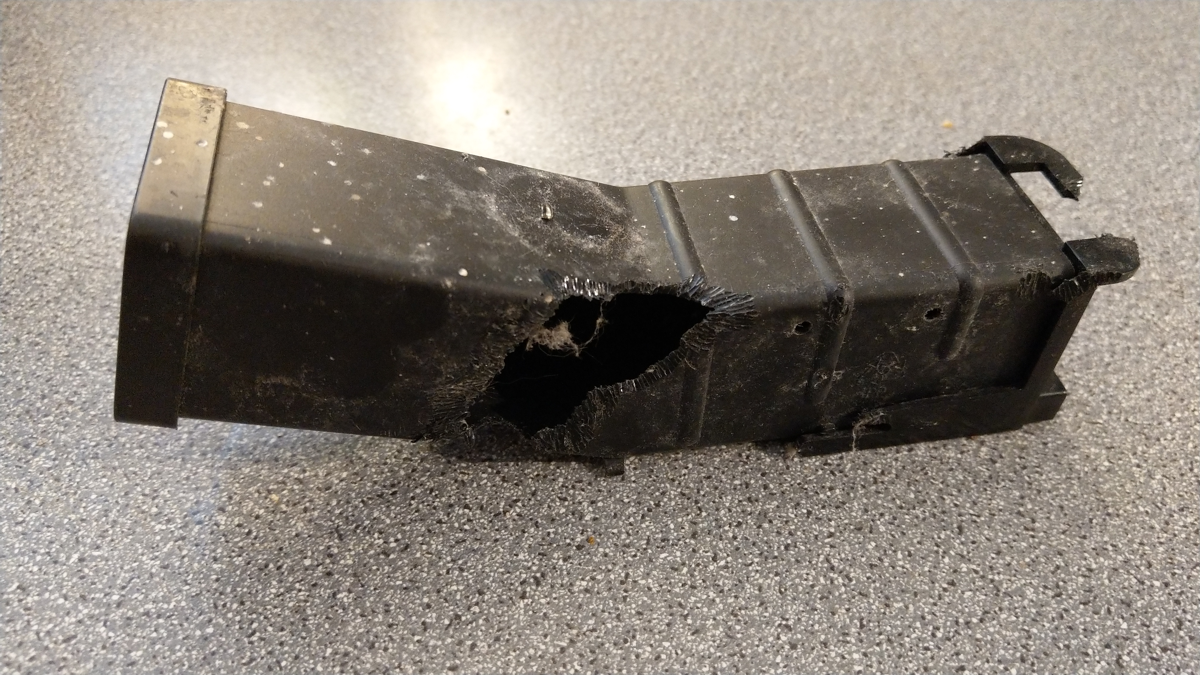 If the perpetrator of this was a mouse, it was some mouse. These humane tipping traps are straightforward — mouse goes in after bait, trap tips shut, and then in the morning you take it outside and release the inmate over the big wall of the neighboring estate, where the mouse won’t be able to readily find the way back.

This creature, though, was plainly unwilling to have anything to do with this scenario. The thing, whatever it was, first bit the door off the trap and threw it away, then chewed through the body of it to get at the bait and take it away upstairs into the roof space. Where we heard it again, that night, gnawing on the beams.

“Okay,” Peter said to me the next morning — yesterday morning — “we can’t be having with this.” And down go the traps with the warfarin bait.

Which we find, this morning, knocked about and scattered (though some of it may also have been taken away up into the attic “for later.” And we also find, in the bedroom clothes closet, on top of the other folded-up clothes, where it belongs… this.

My prezzie from Peter, my cashmere hoodie… with some additions to the design. Many additions. Mostly on the back, but also on the sleeves, front and back. 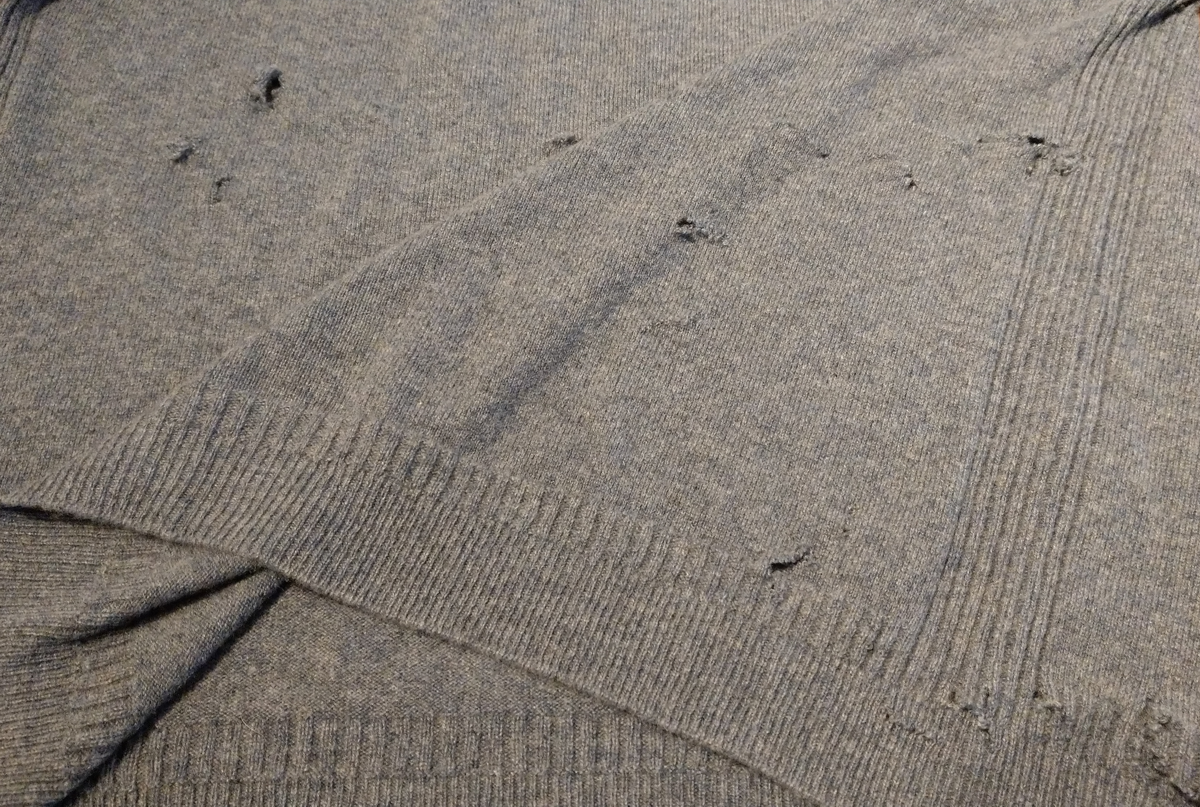 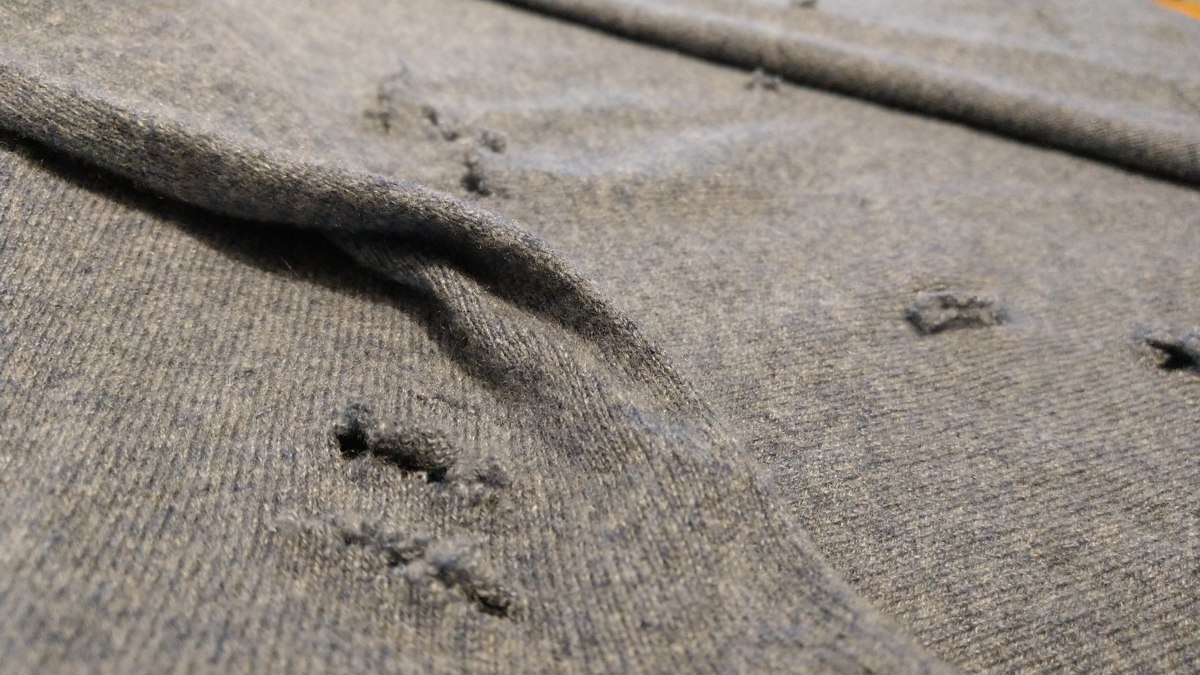 …Now people who know me know that I am generally a temperate creature, not given to sudden extremes of violent emotion. (Because, among other reasons, when you’re a nurse, they kind of train that sort of response out of you — both for your patients’/clients’ safety and your own.)

But you’d have had a lot of trouble believing that this morning, because — having been handed the hoodie by a very shocked and upset Peter — my immediate response was as follows:

“Get me MOAR POISON. Get me ALL THE RODENT POISON THERE IS. I want that fucking thing shitting out its bleeding innards by sundown.”

So it has been written: so it has been done. Now I wait… and meanwhile, I get to call the nice cashmere people in Dublin and find out where they send customers to have their knitwear mended after vermin have attempted to devour it.

I do not think I will be writing anything life-affirming today. Right now the general mood around here is horns-of-Rohan, death, death, DEATH.

…And in the meantime, I’ll let anyone who’s interested know when we find the corpse.