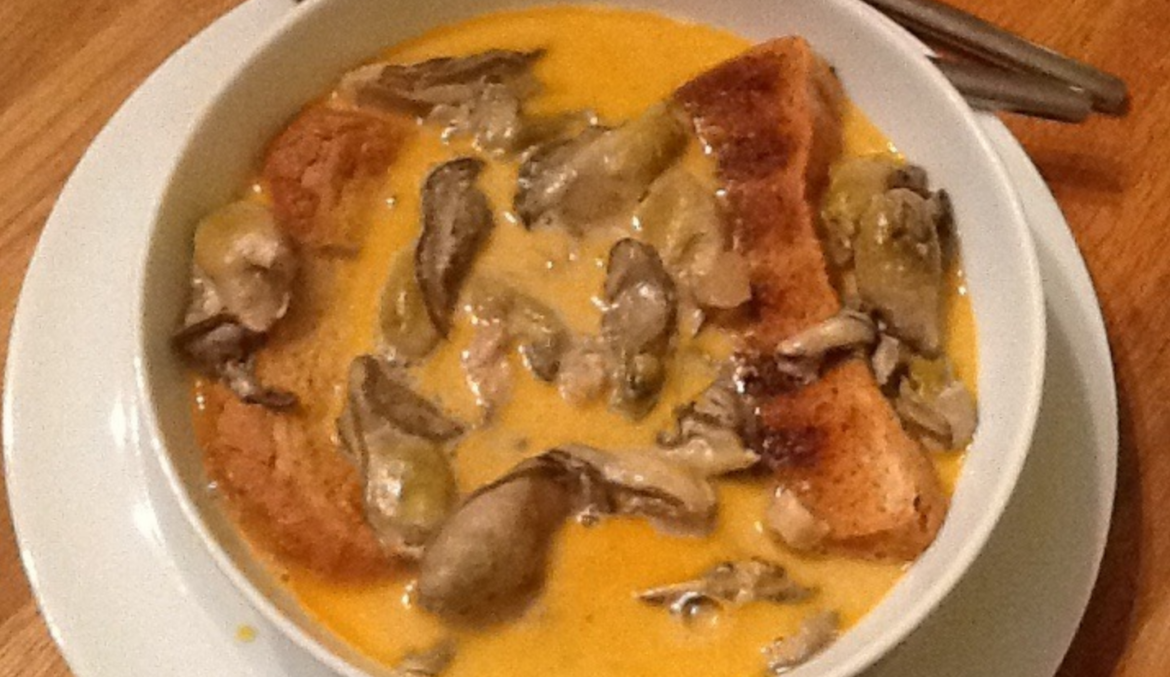 I love Ludwig Bemelmans for many reasons that usually have more to do with writing and his challenging career arc than with food (more details here). But this post’s about the food, and a specific favorite recipe.

In his collection of “slice-of-culinary-life” writings La Bonne Table,  Bemelmans passes on a bit of info that many New Yorkers, or visitors to the city, would be glad to have: the original recipe for one version of the famous shellfish pan roast served at Grand Central Terminal’s venerable Oyster Bar and Restaurant (a venue much appreciated by the cats in the Feline Wizardry series, as well as by the series’s author, who ate there as often as she could afford to while living and working in Manhattan).

So here’s the image of the page in La Bonne Table where the recipe/method appears, and a transcription of the method. Bemelmans gives the version for the clam pan roast. For an oyster panroast like the one in the header image, I just substitute canned oysters and enough fish stock or consommé to equal the amount of clam broth Bemelmans quotes. All kinds of shellfish work brilliantly in this (and if you’re actually in the Oyster Bar some time and feel inclined toward this dish, you might like to order the combination one, which has a little bit of everything). I’ve broken up the original block of his text for readability’s sake: may his kindly shade forgive me. 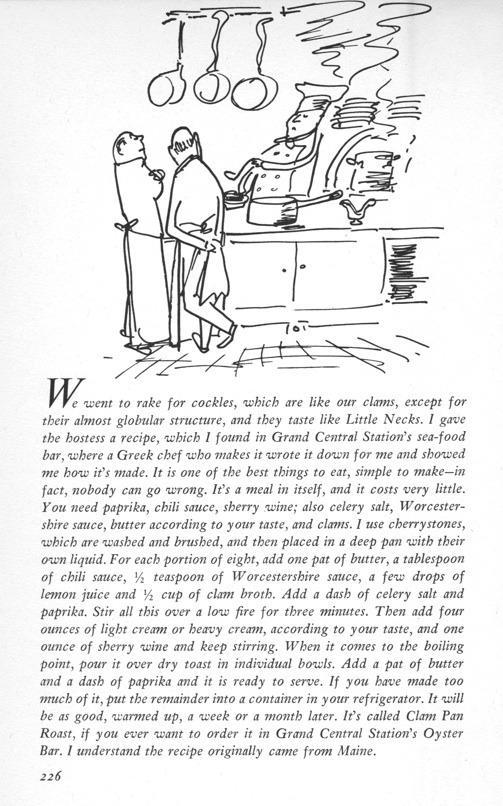 We went to rake for cockles, which are like our clams, except for their globular structure, and they taste like Little Necks. I gave the hostess a recipe, which I found in Grand Central Station’s sea-food bar, where a Greek chef who makes it wrote it down for me and showed me how it’s made. It is one of the best things to eat, simple to make– in fact, nobody can go wrong. It’s a meal in itself, and it costs very little.

You need paprika, chili sauce, sherry wine; also celery salt, Worcestershire sauce, butter according to your taste, and clams. I use cherrystones, which are washed and brushed, and then placed in a deep pan with their own liquid. For each portion of eight, add one pat of butter, a tablespoon of chili sauce, 1/2 teaspoon of Worcestershire sauce, a few drops of lemon juice and 1/2 cup of clam broth. Add a dash of celery salt and paprika.

Stir all this over a low fire for three minutes. Then add four ounces of light cream or heavy cream, according to your taste, and one ounce of sherry wine, and keep stirring. When it comes to the boiling point, pour it over dry toast in individual bowls. Add a pat of butter and a dash of paprika and it is ready to serve.

If you have made too much of it, put the remainder in a container in your refrigerator. It will be as good, warmed up, a week or a month* later. It’s called Clam Pan Roast, if you ever want to order it at Grand Central Station’s Oyster Bar. I understand the recipe originally came from Maine.

(This post originally appeared at the author’s Tumblr, and is reproduced here so people who [correctly] aren’t wild about their ToS as regards data sharing don’t have to go over there.)

*I love his enthusiasm here, but frankly I wouldn’t leave this in the fridge for any month. A few days maybe. (Though it must be said, I couldn’t leave it alone that long anyway. It’s really good.)