For the Solstice: "Invictus" 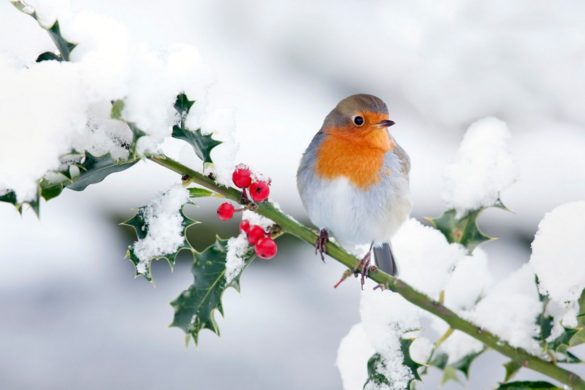 In the dimness he woke and knew it was too late. Morning never came so late unless the world was ending.

Fortunately, he knew what to do about that.

He blinked and ruffled his feathers, looking around. This was his place. Surrounding a patch of grass were two holly trees, a pine, a cypress whose branches all went the wrong way, and much shrubbery, mostly beech and thorn. The shelter was good here, even on nights like last night. And in the holly, food appeared hung up: good food that tasted of fat and meat. It was all his. Later, when it was time for sex, there would be someone else who’d get some of it. But right now, he owned it.

This cold white stuff on the ground did complicate matters. It came and went without warning, and here it was again. Now, others who might have spent the morning scratching around the ground instead of stuffing themselves full up here would be turning up in his territory, eating his food. His feathers ruffled up again, this time with rage at the thought. Bastards. Bastards. Kill them all.

He hopped up onto the branch that had the best view across the patch of grass and into the bushes, and sang. Bastards! Who wants a piece of me? Come and get it! Because this was when it had to be said, no matter how much you might have preferred to sit quiet with your feathers fluffed up, conserving your heat. The dim sky was already paling toward that too-cold blue. It would be a bad day, cold, everybody and his family would turn up here trying to get at the tree food, which was what you needed this time of year if you meant to stay alive until dusk –

And suddenly he heard the harsh dark cawing coming from across the hardened path, across the wall, in the wood full of tall starved pines. He shivered. Not so early, he thought, what are you doing up at this hour? But he knew. That one wanted the tree-food too. It had come for it before. Now, in the silence before the morning wind, he heard the flapping of the wings.

Hastily he turned to the food cage, ate a few mouthfuls, felt the fat melt down his throat like blood, like life. Almost before he finished, the darkness had landed with a noisy thrash of leaves and branches up in the holly. A huge expressionless black eye gazed down at him.

He sang. It was almost all he could do. It’s mine! Stay away, or I’ll kill you! I’ll kill you! But the outcome was hardly so simple. The black-headed, white-backed shape with the axe-like beak bounced down another branch, and another, its eye on that tree food, that meat. It liked meat too. He’d once seen it zoom down onto the pond and simply pick up a baby duck and fly off with it. I’ll kill you if you get any closer! Don’t push me! I will!

It came closer. It was winter, it was death, the shape now only one branch of holly away. He sang as if life depended on it: because it did. If he had enough to eat, the sun came up. If the sun came up, the world was safe. It was as simple as that. Go away! I have to eat the food or the world will end! I’ll kill you to keep that from happening! Monster, go away, don’t make me rip you up — ! He fluttered at the monstrous gaping head, enraged, desperate.

A clacketing, rattling noise from behind. The black eye went wide, the death-pale bulk roused its wings and flapped clumsily out of the holly tree. Desperate with relief, he flung himself at the food-cage again, and ate with frantic speed as the sky paled brighter, toward day-blue: and between mouthfuls, he sang at the top of his lungs, shuddering with relief and triumph. Bastard! I warned you not to mess with me! Victory! Victory!

The sun peered up over the far hill. The shadows fled. He gorged himself as the black bird flew off, and stopped, and shouted again, Victory!

…She stood there with her teacup in one hand, looking out across the back yard snow at the dot of red breast deep in among the holly branches, pecking furiously at the suet in its little cage. “Boy,” she said to the husband, back in the kitchen, “listen to that little guy. You’d think he’d just won World War Three.”

The door closed. On the snow, the sun of the shortest day shone.

Up against the wall (or actually, on it)