From the Tumblr blogs: Peter Morwood’s Pork with Chiles and Chocolate 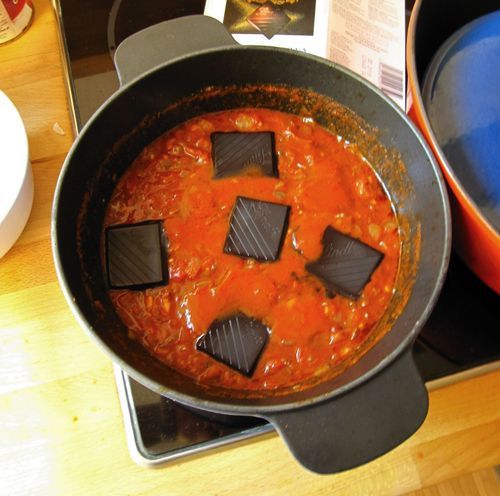 …For those who may be interested: This is a Mexican recipe that Peter devised from one originally intended to use a whole pork roast. It’s really good. The last time he made it for a big crowd, George Takei was seen polishing out the near-empty casserole with a piece of bread to get at the last of the sauce. The illustrating photo was taken while Peter was making it in Vienna for a couple of opera singers of our acquaintance.

(BTW, re: the tarragon vinegar: If you’re in a place where you can’t buy it, you can make it. Get white wine vinegar, heat it to a simmer, stick tarragon into it, take it off heat, bottle it back up and leave it alone for a week or so. [Even dried tarragon will work if you’re desperate.] Re juniper berries: a good grocery will have them from one of the major providers [Schwarz in the UK, or McCormick/Schilling in the US]. But they are kinda regional. Health food stores or specialty ethnic groceries sometimes have them.)

Pork with Chilis and Chocolate

This is a casserole/hotpot/stew/whatever, and the quantity will be enough for 6 people. I usually allow ¼ kg/ ½ lb of lean meat per person. It was originally a pork roast with a basting sauce, but I couldn’t be having with all that. I’ve also adapted the recipe for meats other than pork: the only difference is the cooking time.

This adaptation is simple and fairly lazy. Cubed pork holds together well, and anyway I always overcook pork a little, so its simmering time is approx. 4 hours at a gentle simmer or low-set oven. Cooking time for other meat is proportionately shorter.

The finished product should be chunks of “fork-tender” meat in a rich, brick-red sauce; if you overdo it so everything comes apart (unlikely with pork and lamb, but possible with chicken or beef) you still have an incredible stew, an amazing thick soup, or the pasta sauce of the gods…

3 medium onions, finely chopped. (Or more, if you like onions.)

3-10 cloves of garlic, finely chopped. (This depends on how much you and your fellow eaters like garlic. I like lots, and it’s good for the cardiovascular system.)

6-10 juniper berries, crushed. (Same problem as with crushed coriander, but by now, who’s worried. Go ptui with a friend again.)

1 Kg/2lb tomatoes, peeled, seeded and chopped. (Or cheat, use 3 x 400g/8oz tins. The juice in which they’re packed will make the sauce a little more runny. It won’t affect the flavour, but don’t wear white when you’re eating this stuff…)

180ml/6 fl oz tarragon vinegar. (This is what gives it that distinctive flavour.)

240ml/8 fl.oz water. (Boring, but necessary, otherwise the vinegar will go for your throat.)

1 tablespoon chili powder, of your own preferred hotness. (BTW, this isn’t to a furiously hot dish, so moderate the quantity depending on how fiery your chili powder is. The basic “don’t mess with it” recipe should finish up warm, flavoursome and tangy, not incendiary. Incendiary is nice, but shouldn’t be your first introduction to the recipe. Use pure unblended chili/chilli powder; some brands are a chili-con-carne mix with cumin, oregano and garlic powder already added. Check the ingredients on the label.)

Coarse salt and freshly ground pepper to taste. (Don’t overdo them; you can always add more at the table.)

6 oz unsweetened chocolate (Bakers’ or similar) or 8 oz of semisweet (Bournville or Lindt). This is the other good bit. Browns, season and thickens all in one; pity somebody has already used that line for Bisto, which is little more than salty coloured flour.)

Put a little oil in a casserole and sauté the cubed meat until all red/pink colour is gone, then remove and set aside.

In the same casserole, heat the rest of the oil and sauté the onions and garlic until soft and golden. Then add all the remaining sauce ingredients and simmer gently, partly covered, for 45 minutes. (Don’t cover completely or the tomatoes will become bitter.)

Add the meat, bring everything to a boil, then turn the heat right down to a very gentle simmer and cover tightly. We have Le Cousance enamelled cast ironware with “self-basting” buttons moulded inside the lid – vapour condenses on the lid and drips off these buttons back into the casserole; I think Le Creuset has something similar. Give about 3½ -4 hours for pork, 2½-3 hour for beef or lamb, 1½ -2 hours for chicken. At the first time given, start checking: when the meat is fork-tender, it’s done.

(This can also be cooked in an oven. Preheat the oven to 120C/250F, return the meat into a casserole, bring to the boil and cover tightly. In a fan oven, seal the casserole with foil or flour-and-water paste to prevent the forced air from drying things out. It can also be prepared in advance and placed in a timer-oven when leaving for work to be ready in the evening; if so, add an extra 20 minutes pre-heat time.)

The finished product will be a handsome deep terracotta red, so serve it (for a nice colour contrast) with sliced green beans and plain white rice, or 2/3-1/3 white rice and wild rice. Or try it with couscous. (It works!) Or polenta. Or even mashed potatoes (peel them, boil them, mash them and don’t add butter, cream, milk or anything else except a pinch of salt.) What you’re looking at here are methods of getting all of the sauce. For the same reason, have some crusty French bread on the table as well. It all saves on washing-up.

For drinks, some vin trés ordinaire. The sauce is heavily garlicked, onioned and vinegared, so don’t bother with anything too complex or expensive. Egri Bikhàver Bull’s Blood is good. Or a rough non-Classico Chianti, the sort that comes in a straw-covered fiasco. If you don’t like red, go for a potent dry white like Orvieto Secco, Muscadet Sevré et Mains, Gewürztraminer or Chardonnay (French rather than Californian, unless you like the taste of enough oak to build a table.) Rosé for some reason doesn’t work, at least not for me.

For Fairytale Friday: The Prince with the Three Fates

DD Q&A: Creation, self-esteem, and running your own work down