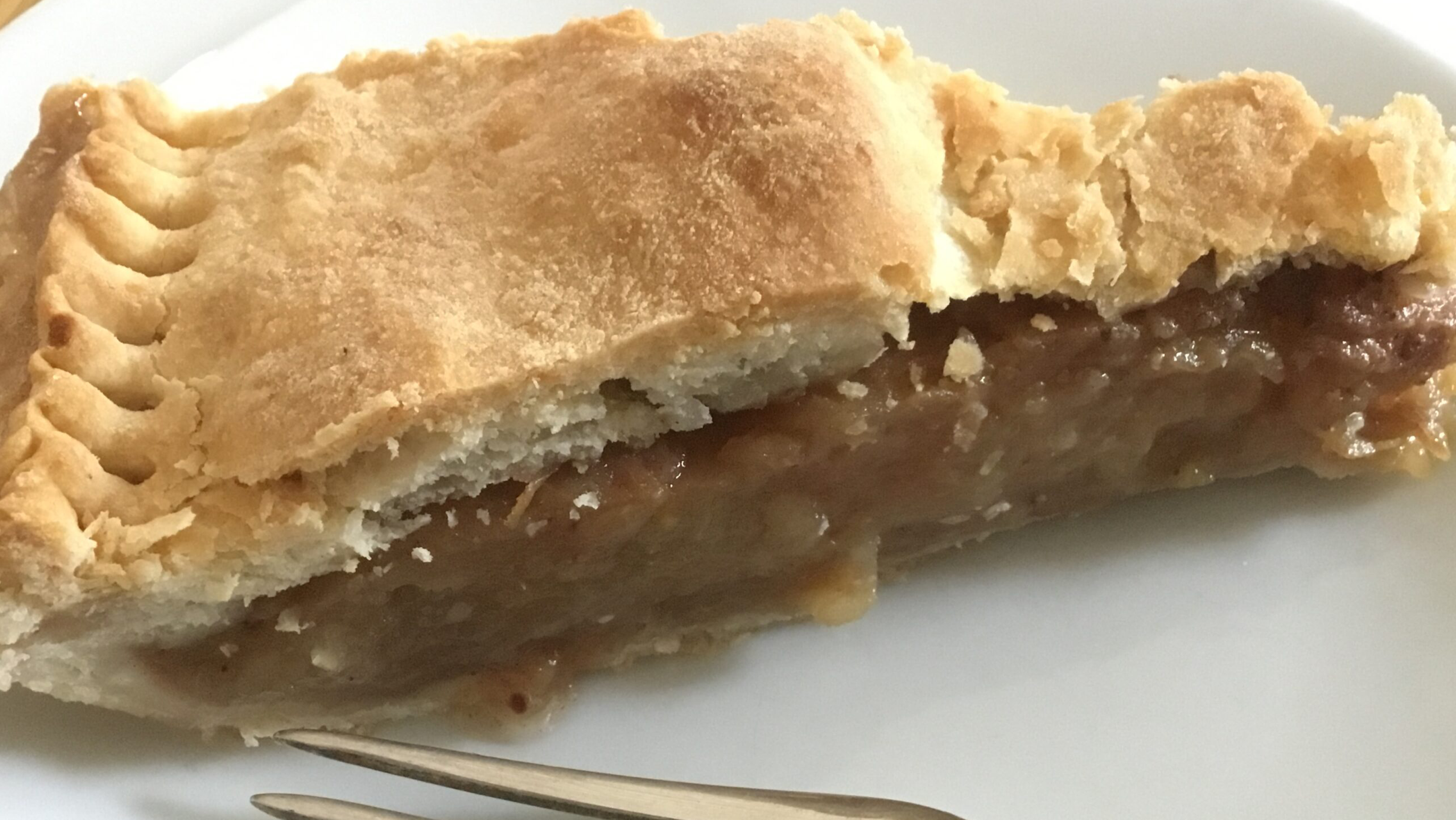 The following recipe was improvised on the fly on the evening of October 16, 2020, and unfolded on Twitter. I don’t allow my tweets to be unrolled (because the companies that do that make money off my labor without giving me any). But I’m happy to share the recipe, and the process, here in my own web space, with anyone who’s interested.

Status report, Baking-While-You-Write dep’t: These three Bramleys weigh 1100g (that biggest one is nearly half a kilo all by itself. I FEEL AN APPLE PIE COMING ON. 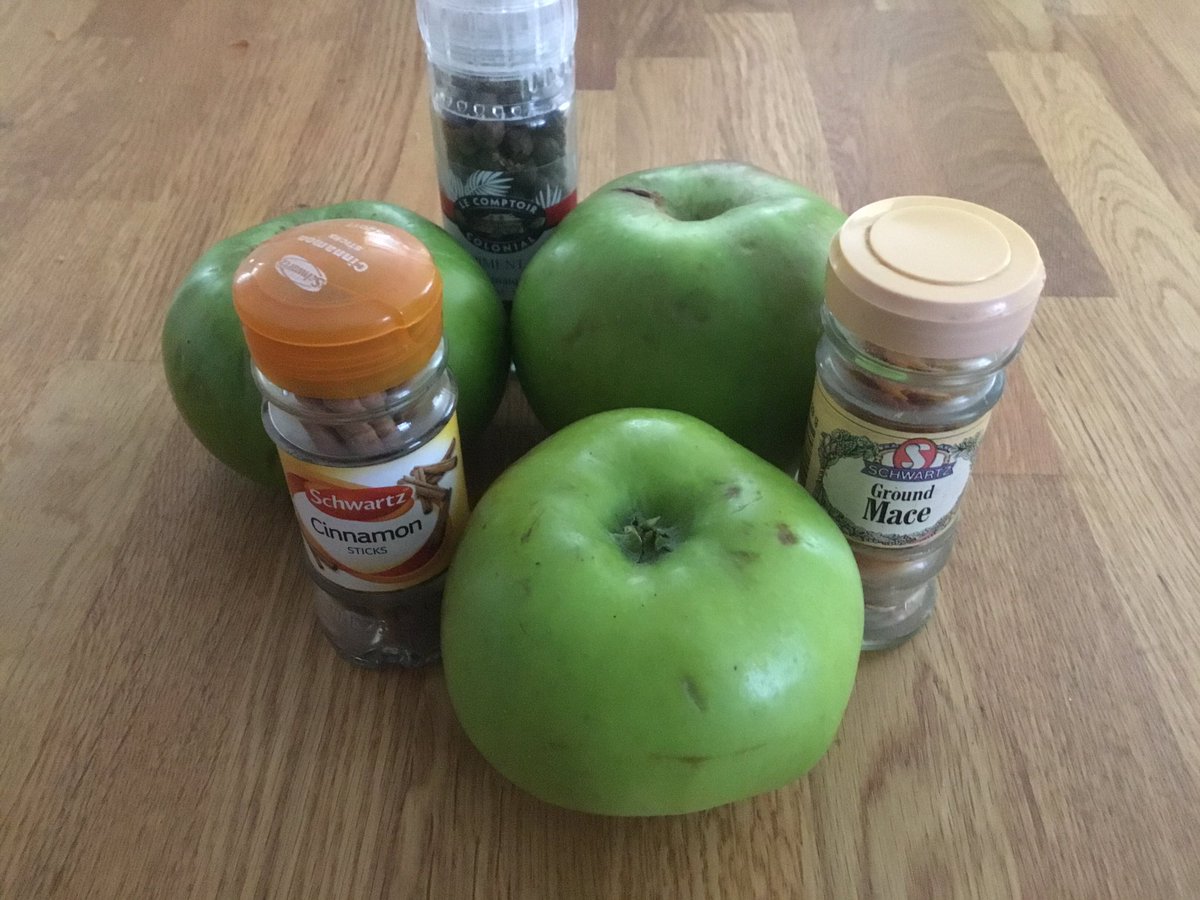 Apples like these mean that half-measures will not be sufficient. Meaning: I GOT LARD OUT TO DEFROST. This is going to be one of those *serious pie crusts.* 🙂 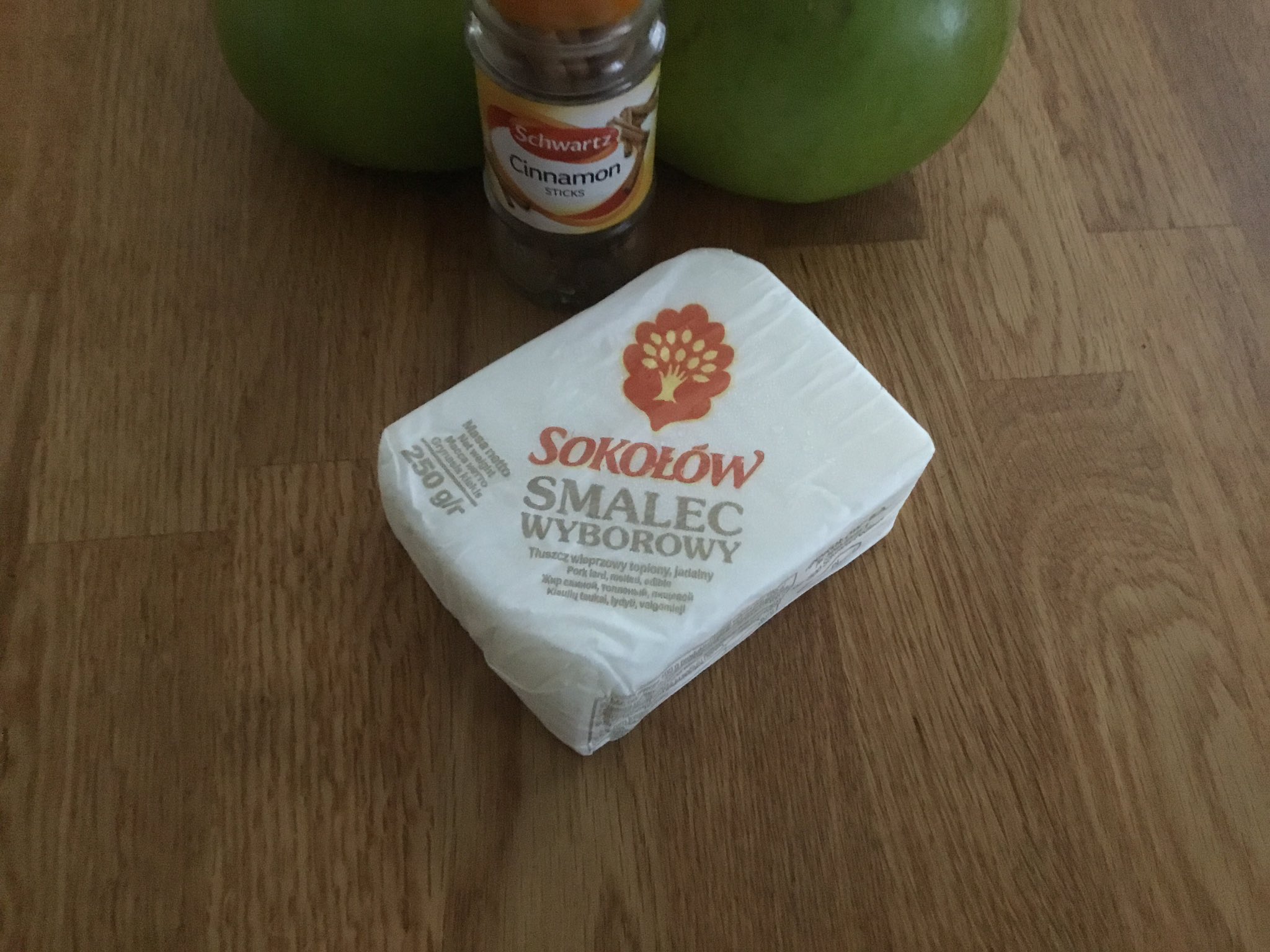 …Step one: apples sliced on the mandoline and put down in acidulated water while I make the pie crust and watch the evening news / aka “the How F*cked Are We Tonight Show”. 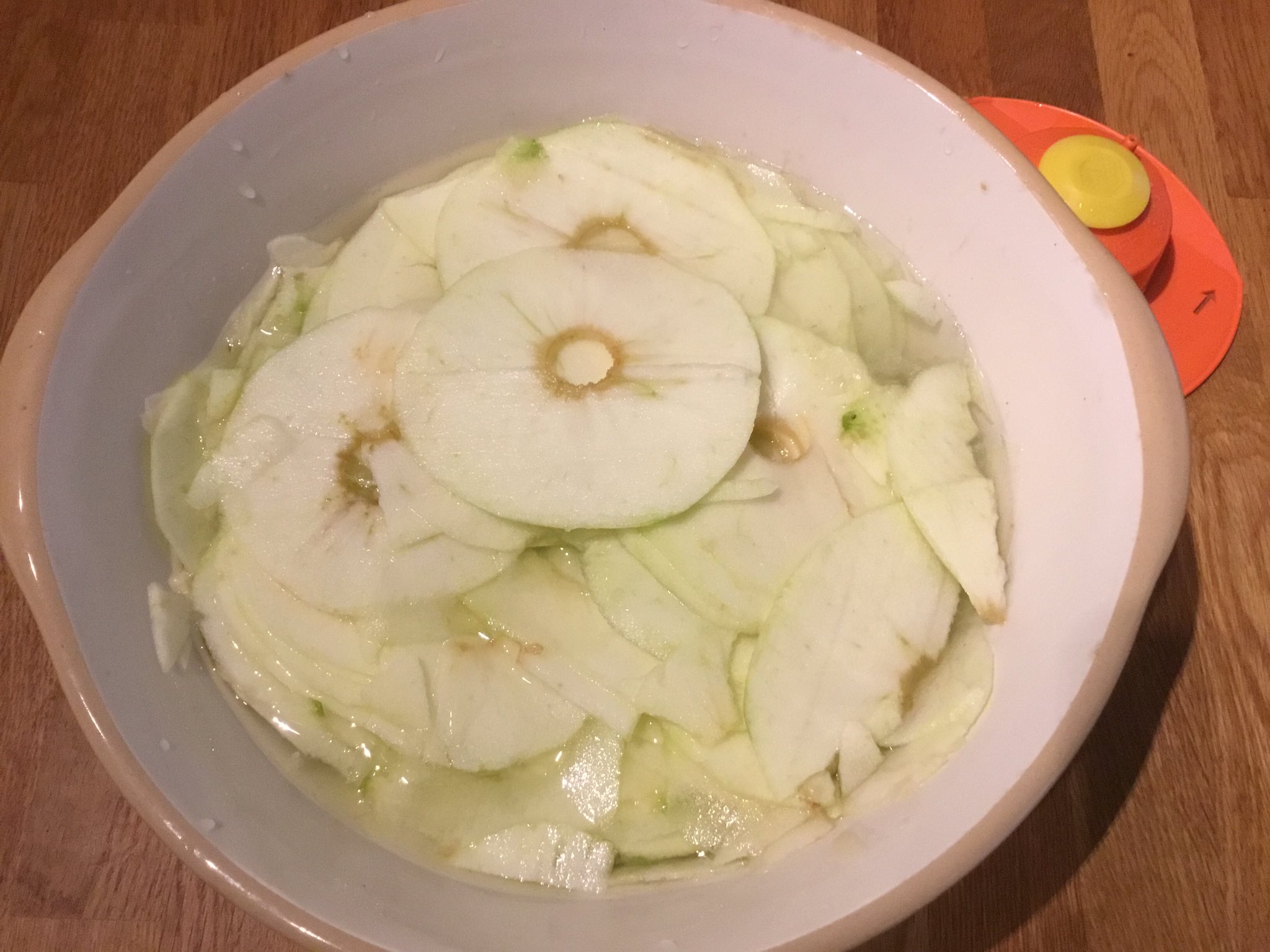 Now: pie crust. 3:1 ratio, roughly: 1.5 c all purpose flour / 0.5 c lard: a tbs of butter to change up the materials chemistry a little (the butter adds a smidgen of steam to the equation): 4-5 tbs of water (with lemon juice) (and a bit more if necessary) to bring it together.
…I do this in the Cuisinart / Magimix. The only caution if you do this is to be careful not to overwork it. Add the liquid a tablespoon or so at a time between 15-30 sec pulses until the dough gathers. Then: 30-60 minutes to rest in the fridge.
…The other caution is to mind the sharp bits of the blade when washing it. 🙂 This is a new Cuisinart blade, and it just collected from me what we refer to around here as “steel fee”: i.e. every new sharp in the house seems to get each user once. (shrug) Just the way it goes. 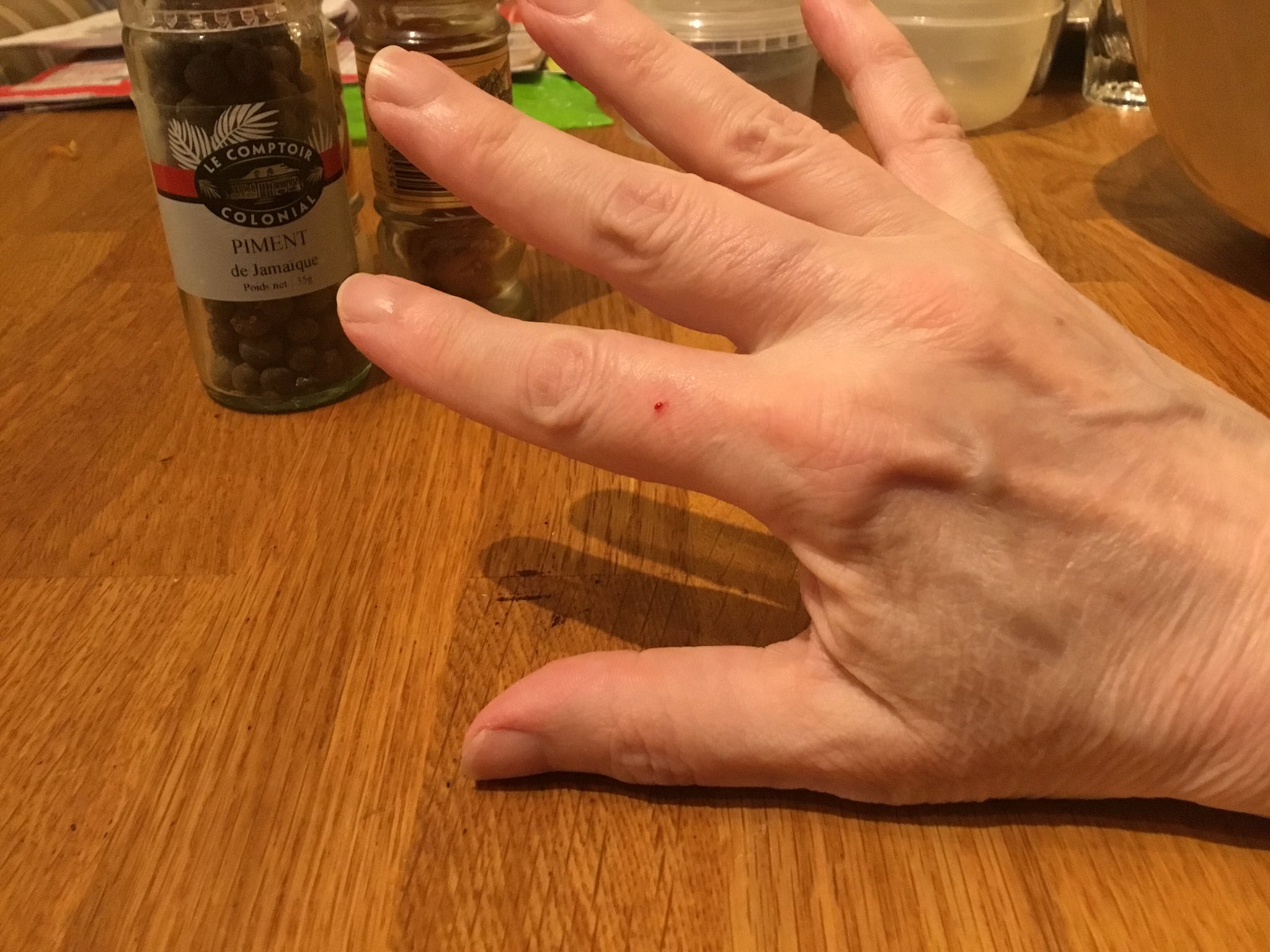 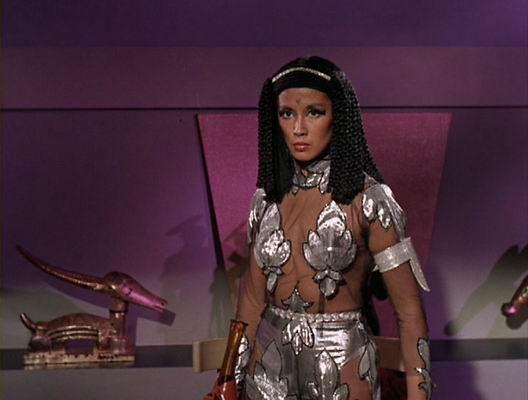 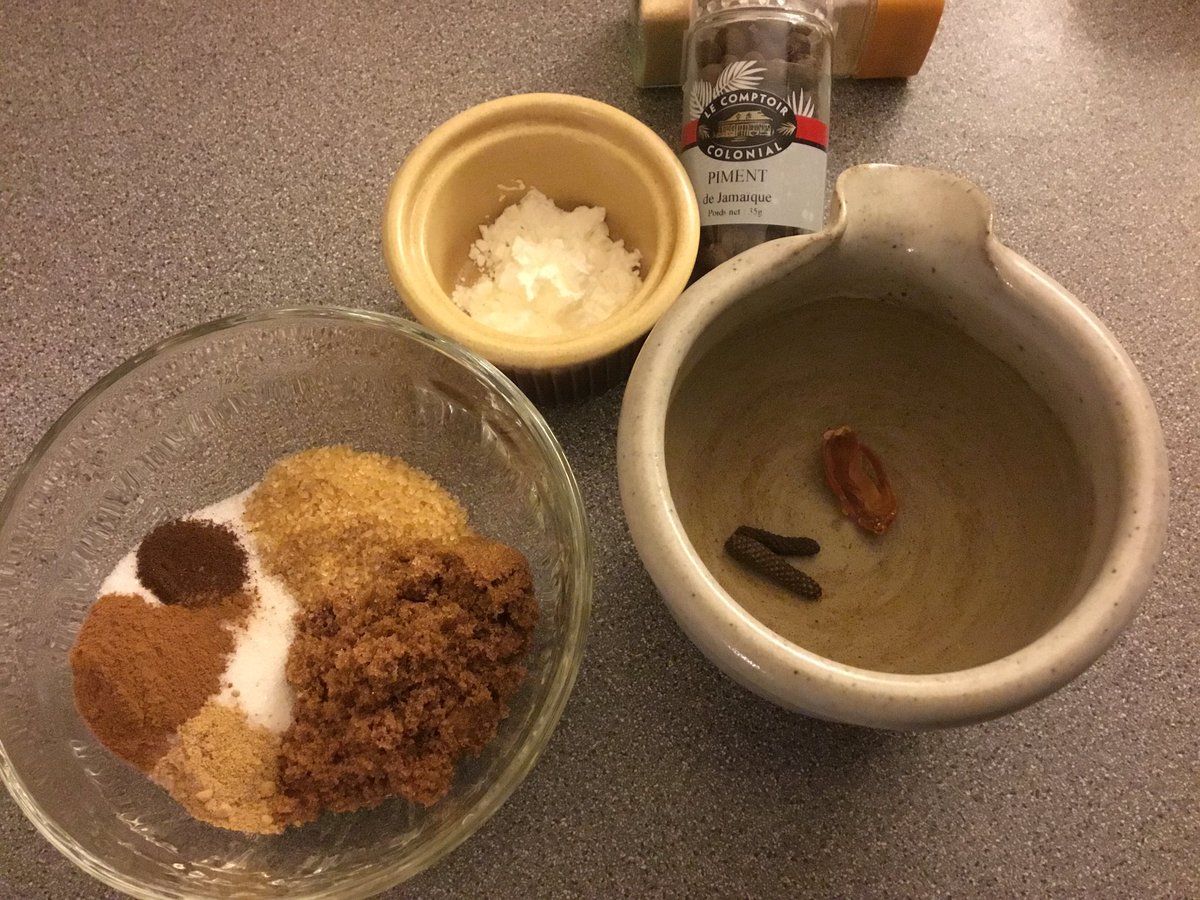 …and long pepper (Piper longum). Those get ground up and added to the others, along with about 1.5 T of cornstarch that will help the juices released during cooking stay more or less where they are. Finally, berry allspice (in the grinder up top, by itself) will go in too.
…So now to business with the crust. Dough separated 2/3 (for the bottom crust) to 1/3 (for the top). The pie dish is a prezzie from Katie, Séan and Ruadraigh McGrath (yes, *that* Katie McGrath: the family were our nearish neighbors when we were living on that side of Wicklow.) 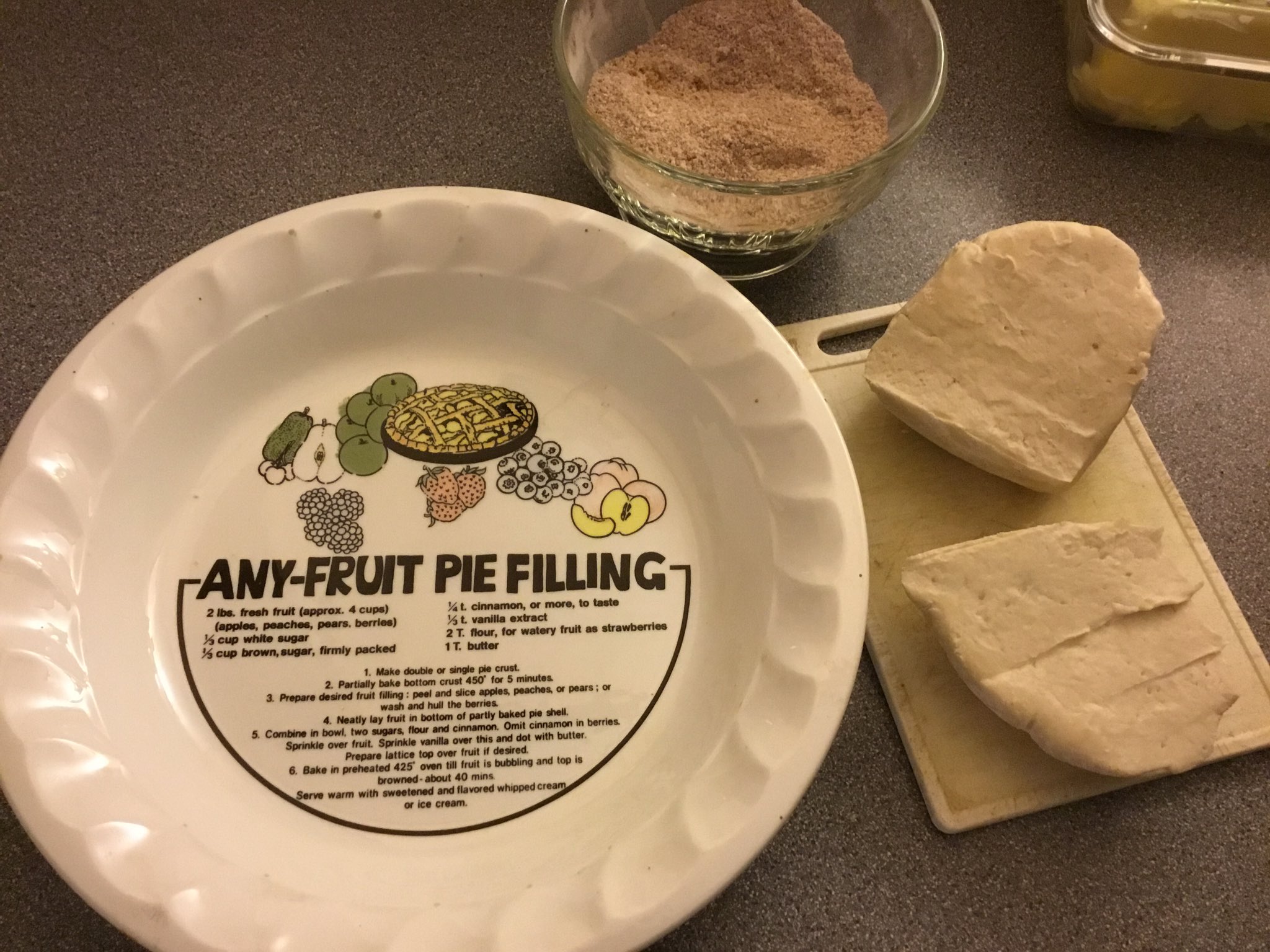 …Bottom crust in place. It is possible to get very scenic with the layering of the apples, but (a) these are indeed a bit on the old/fragile side and (b) I couldn’t be bothered right now. First layer in… 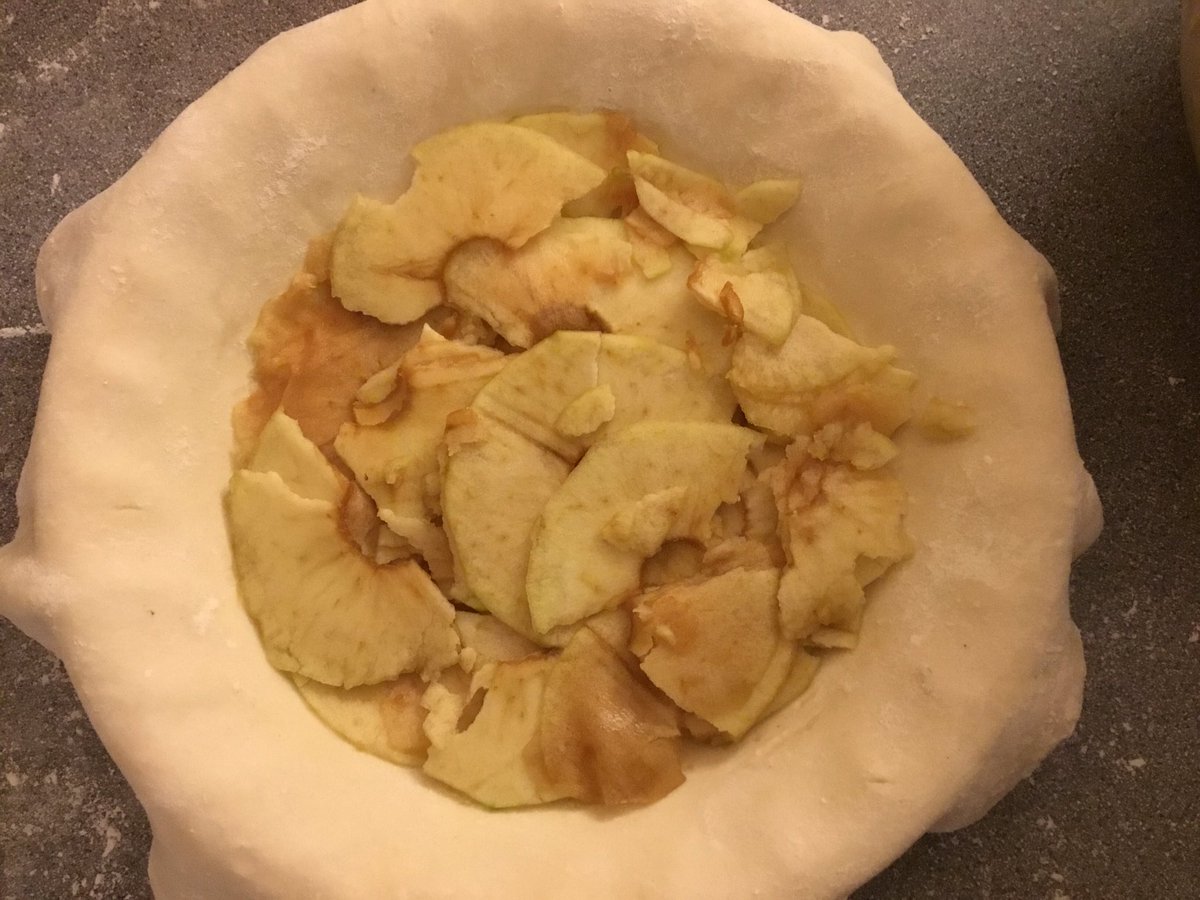 …and first layer of seasoning. 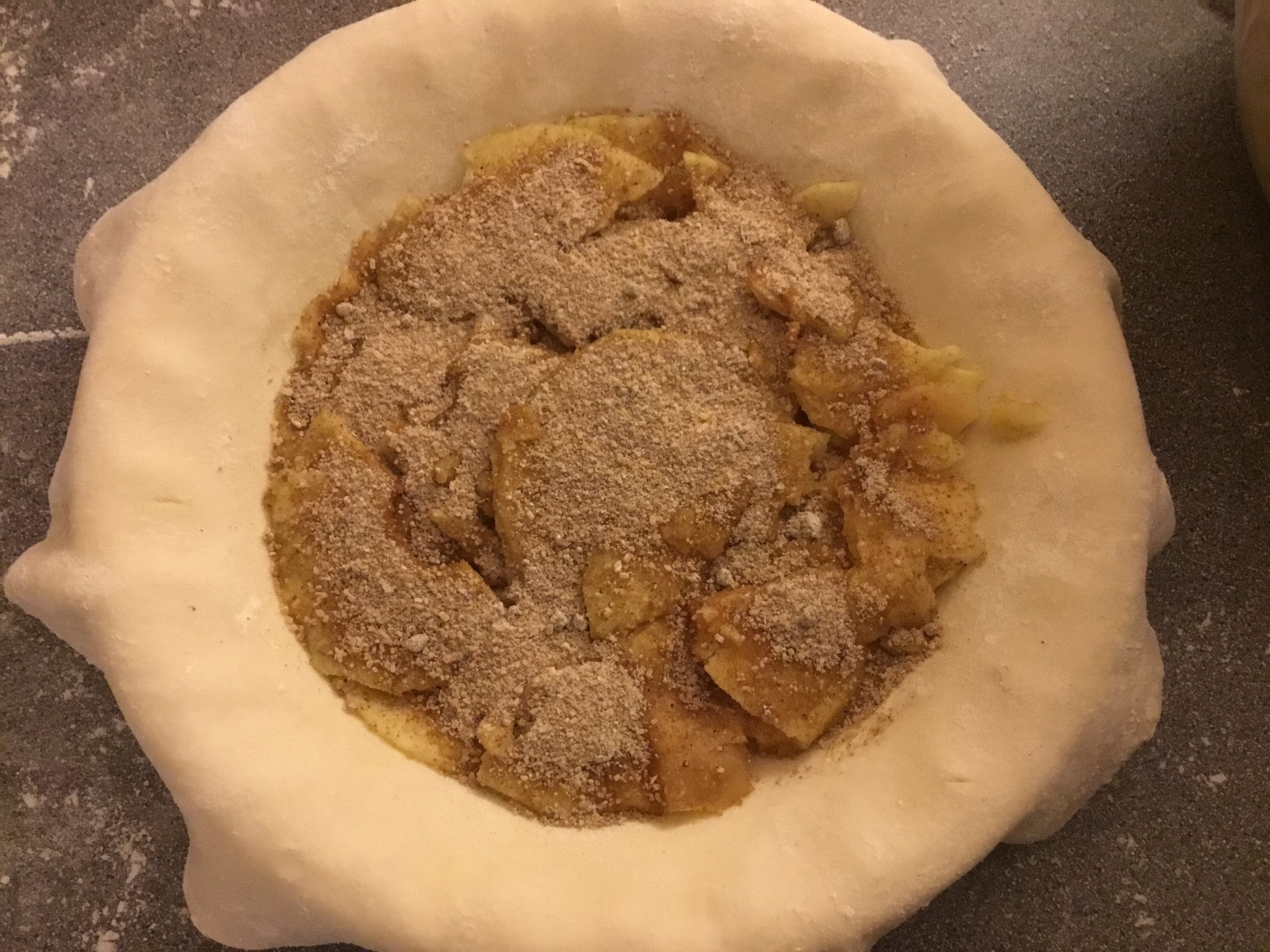 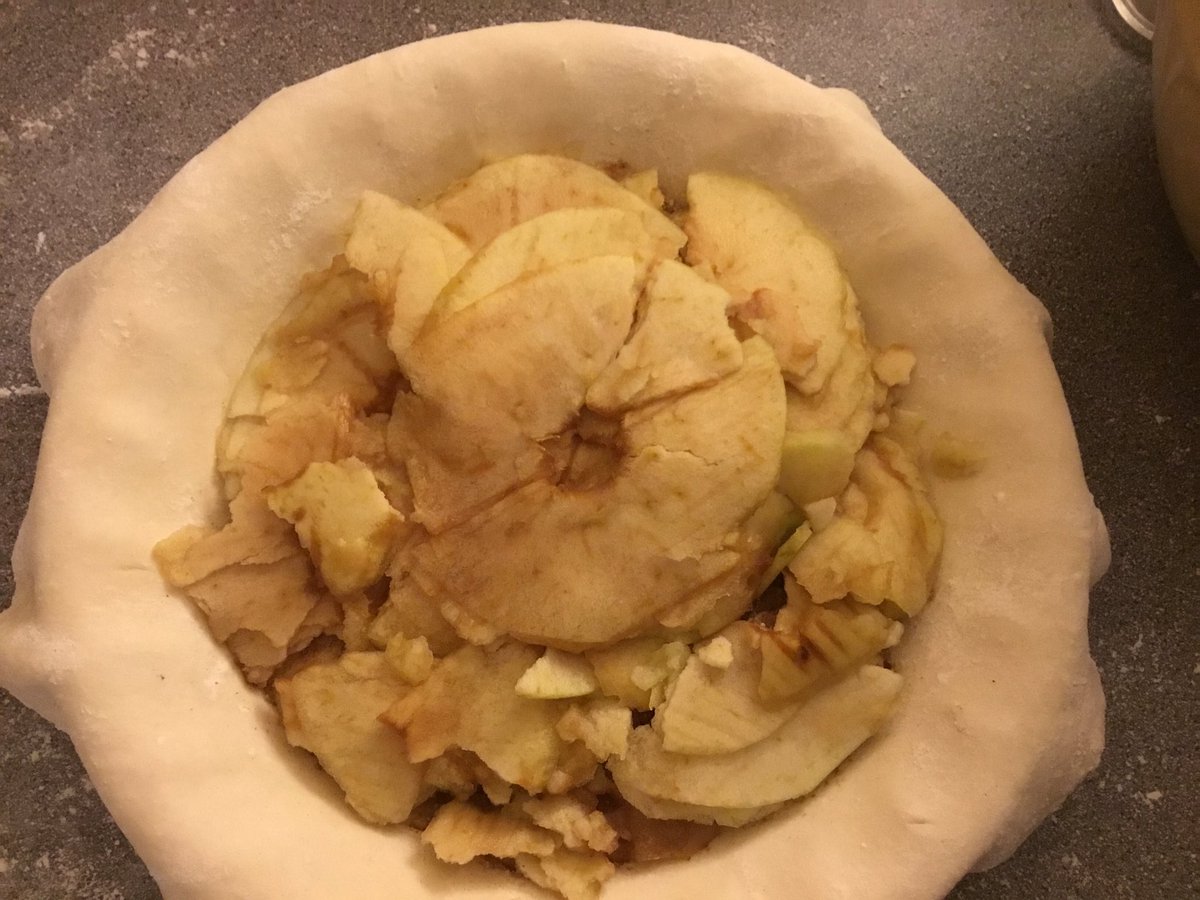 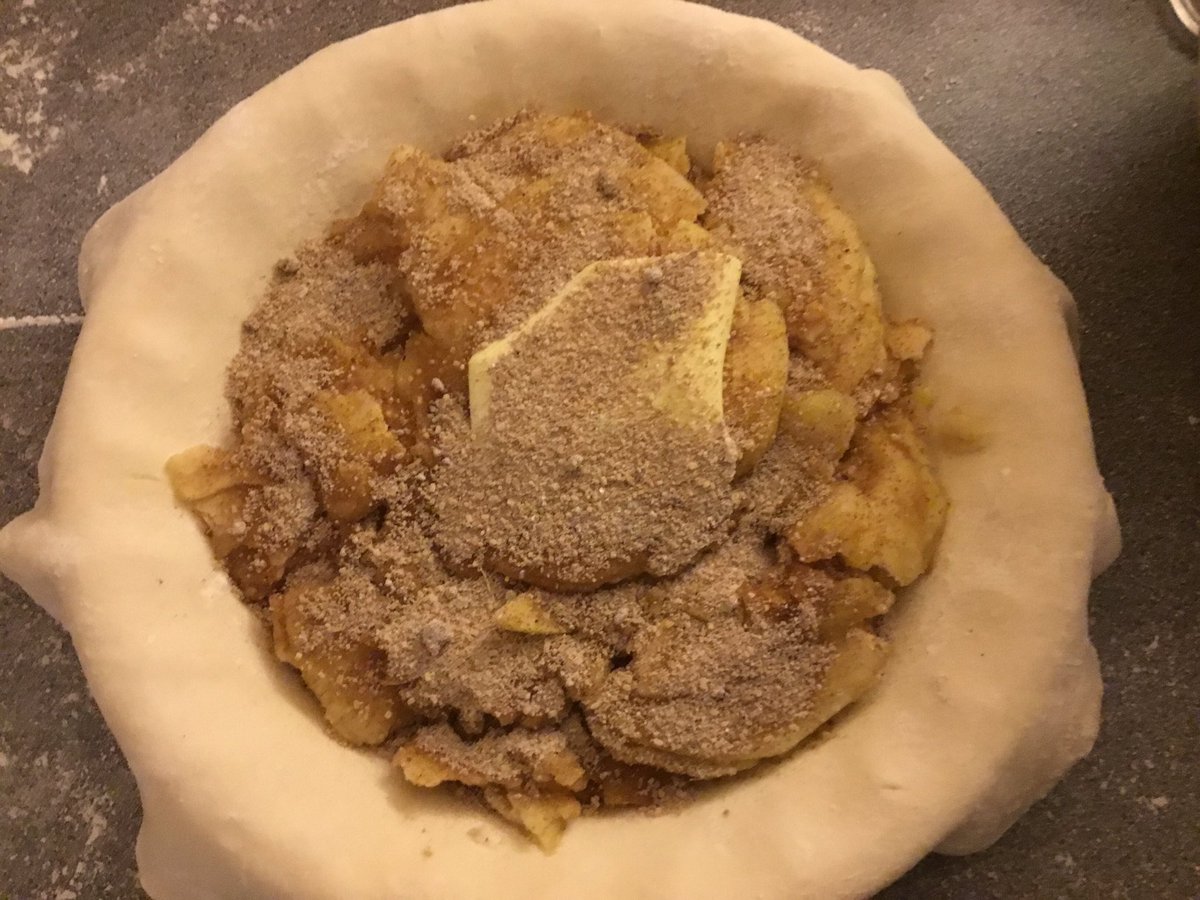 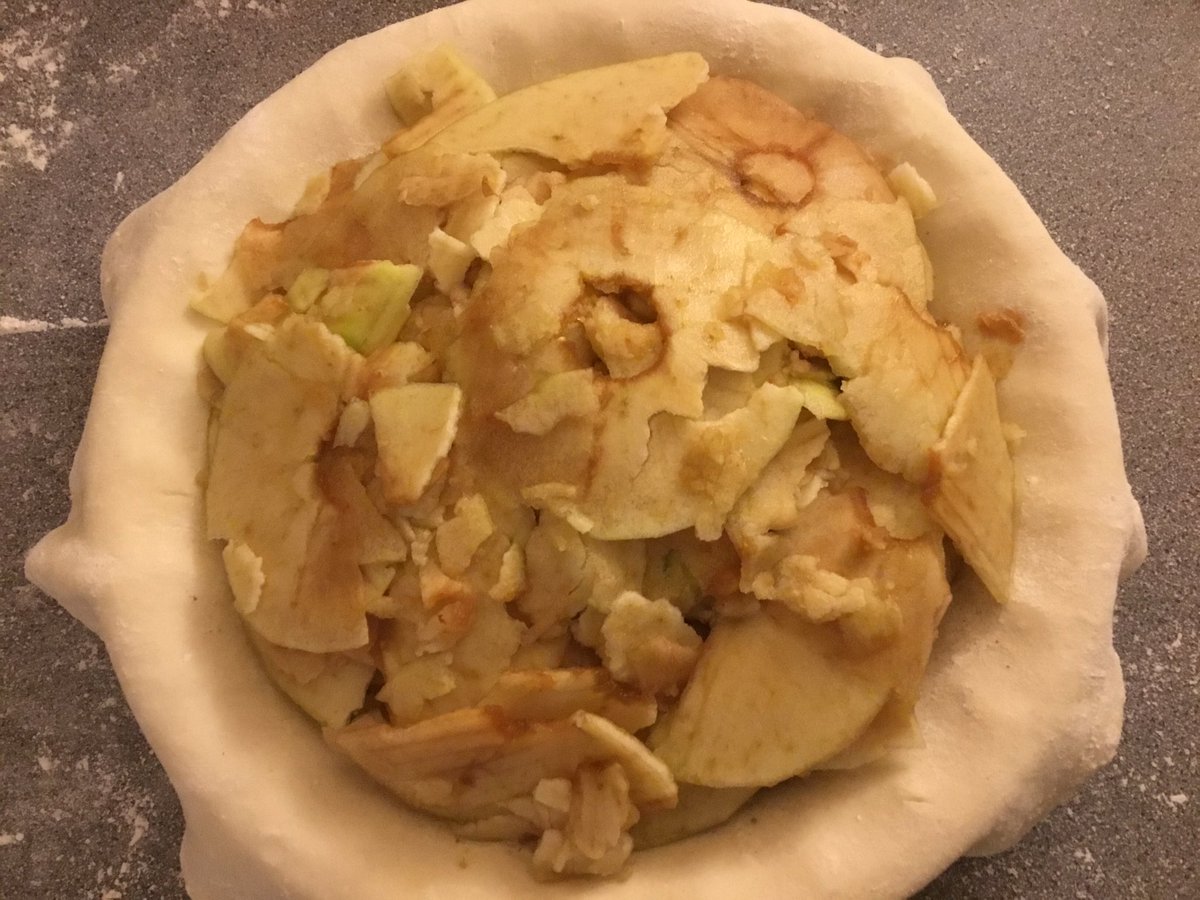 Butter and seasoning. …You will notice that I didn’t trim the crust. This is because I expect this pie to ooze like crazy (and there’s already a pan positioned in the preheating oven to catch the drips). 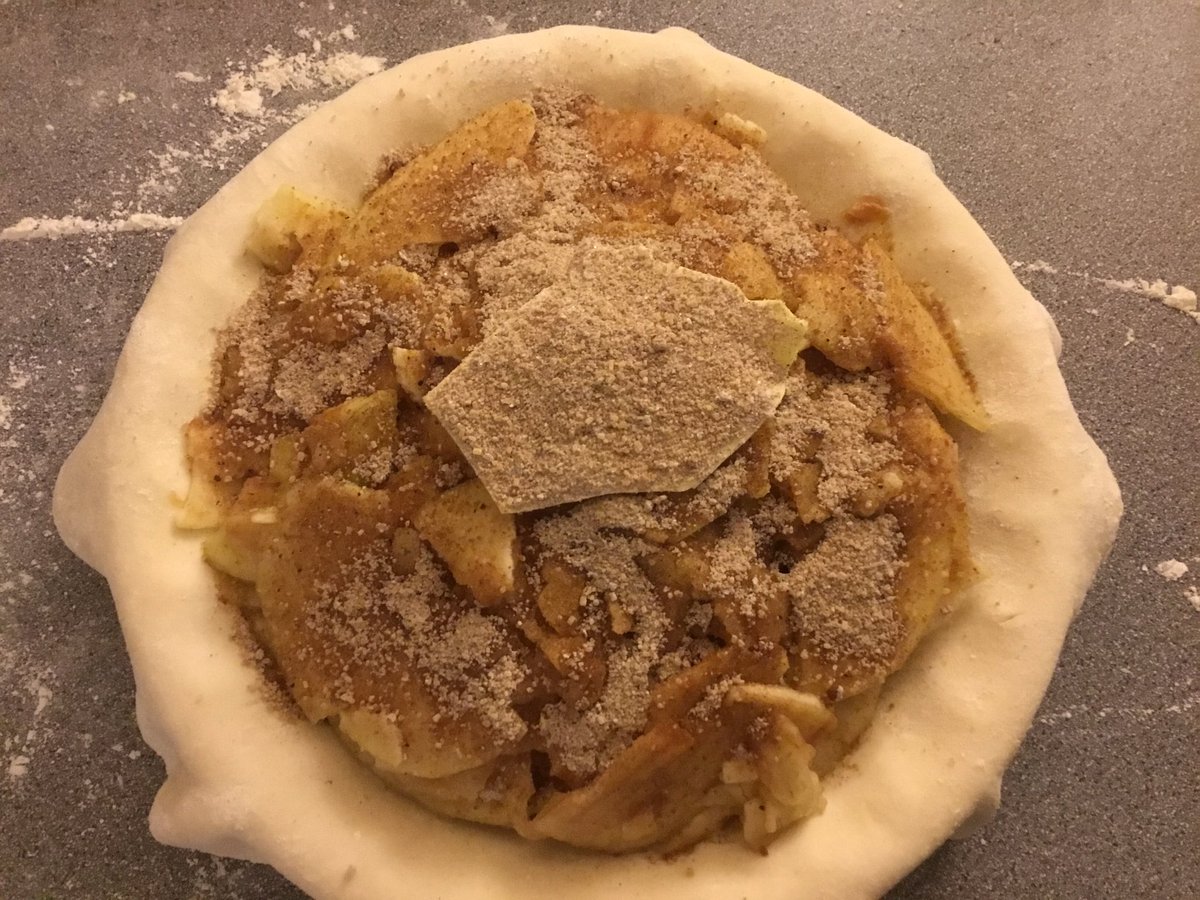 That bottom crust gets folded in; the top crust will be pinched to it to seal. 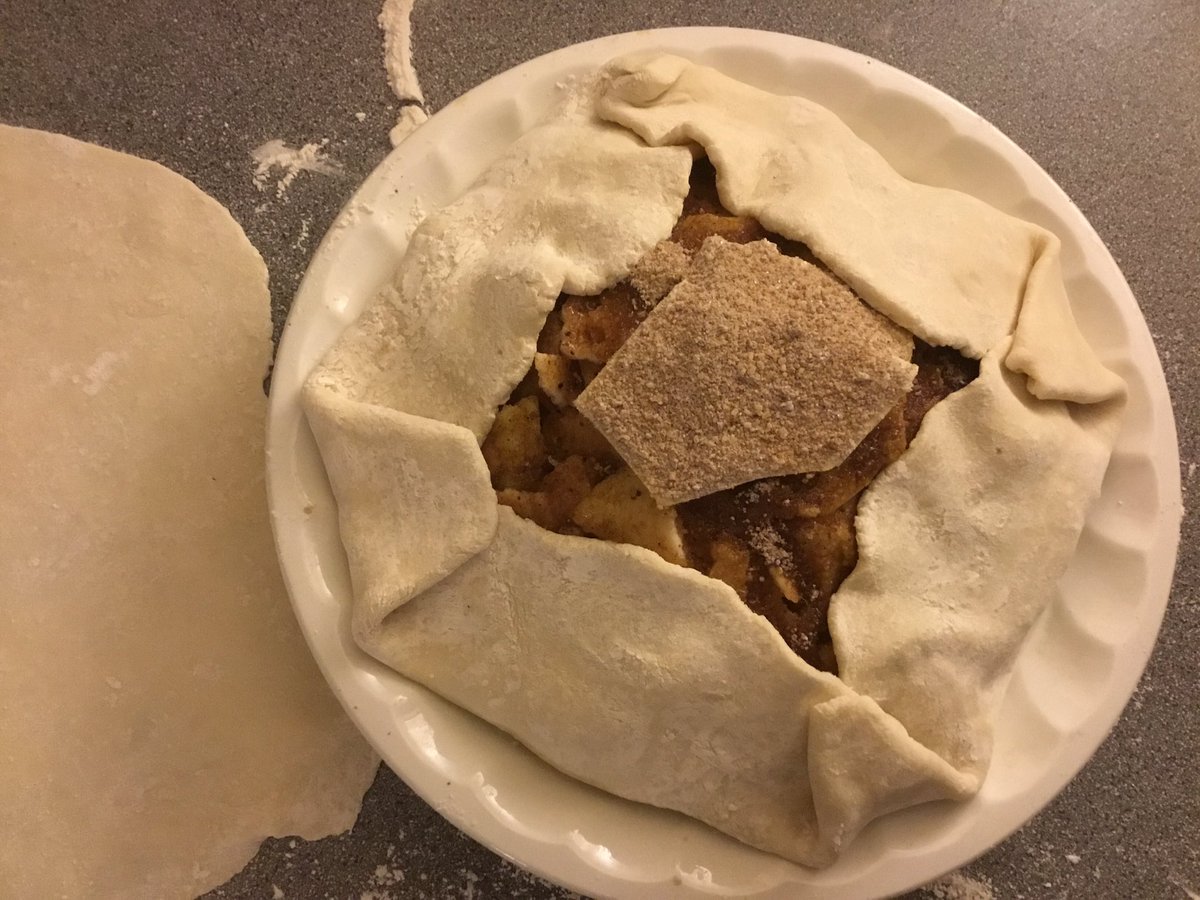 Et voilà. …Pierced for venting because this seems a sensible approach for any pie from which catastrophic collapse during baking is expected. (It’s fairly tall, and those apples really are a bit on the old side and are going to give up a lot of their water.) 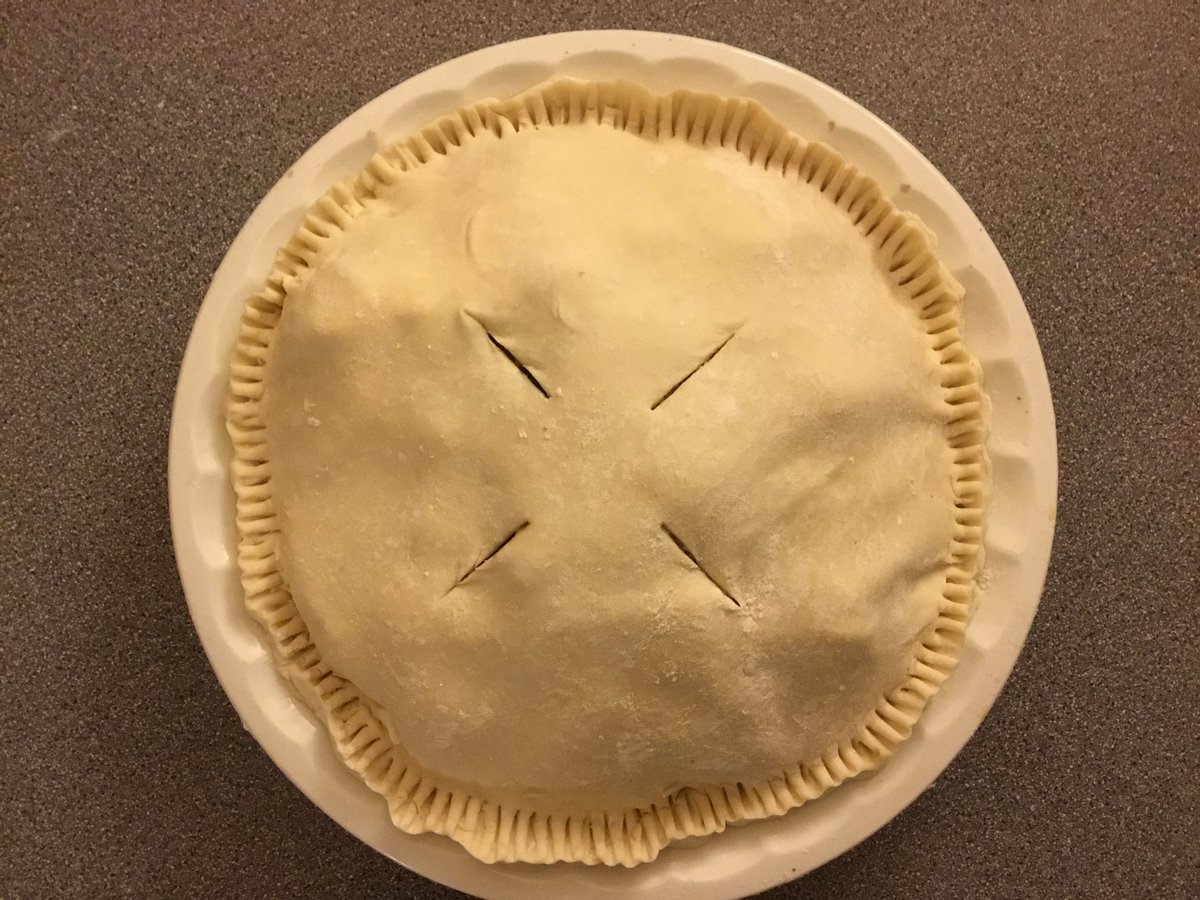 ..Right. Timer should go shortly. Catastrophic collapse (why am I hearing this in Spock’s voice all of a sudden?) “–catastrophic collapse in four, three, two, one–” (SFX: SHAKE/RATTLE/HUM, camera SHAKE, crew LURCH from side to side and fall out of their chairs–)
And so: pie. (@scalzi) …Dripped as expected, but the oven remains clean. …I’ll wait half an hour or so to let it stabilize and then cut a slice. 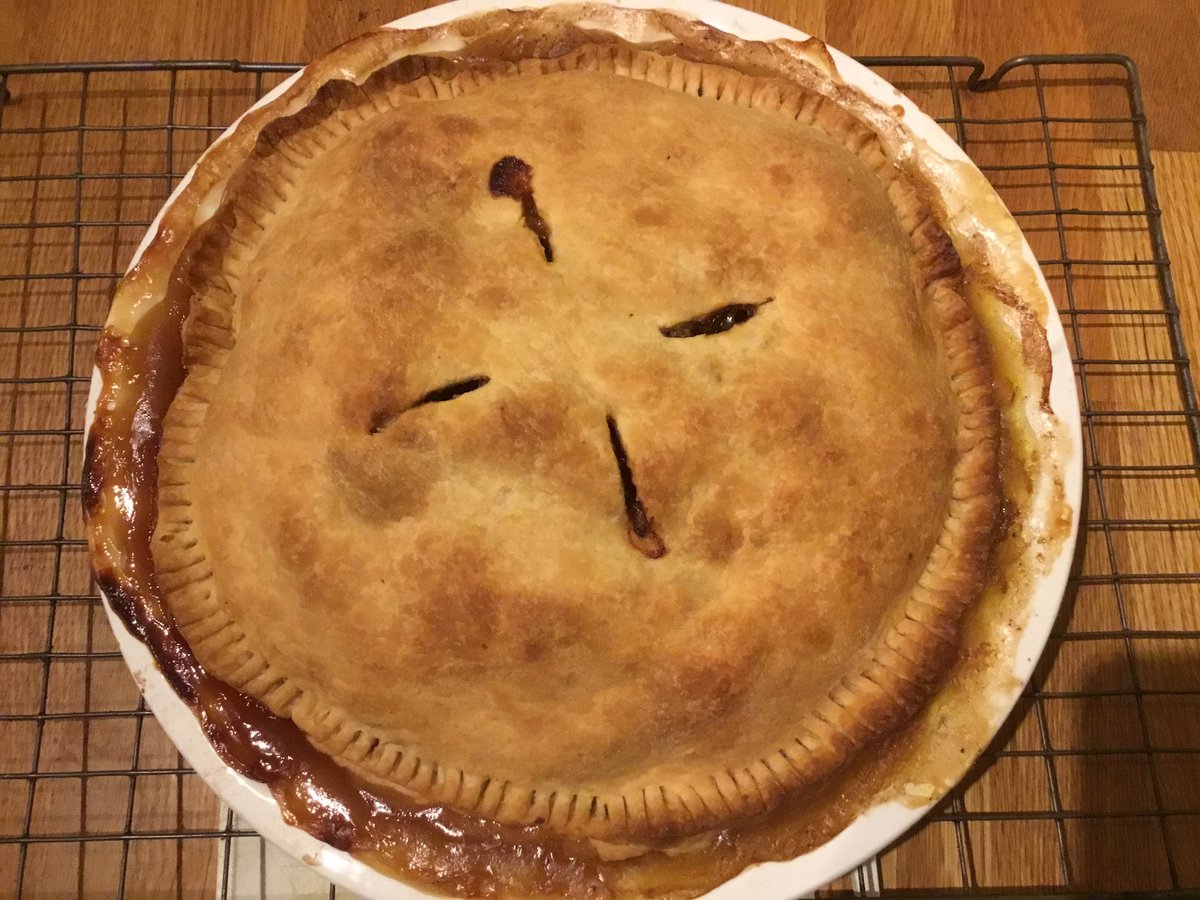 …The image of the Perfect Slice will appear in the morning, when the pie has had a chance to cool completely.
Thanks for having a look! 🙂
3
FacebookTwitterTumblrEmail

Surrender now or I shall unleash my war-hound.

How about instead, I strip all straight white male content from the show. We've seen plenty of that already, anyway, and I think they may be polluting the show. Don't ruin my mood. https://twitter.com/lexxlexxsmith/status/1528923435354800129