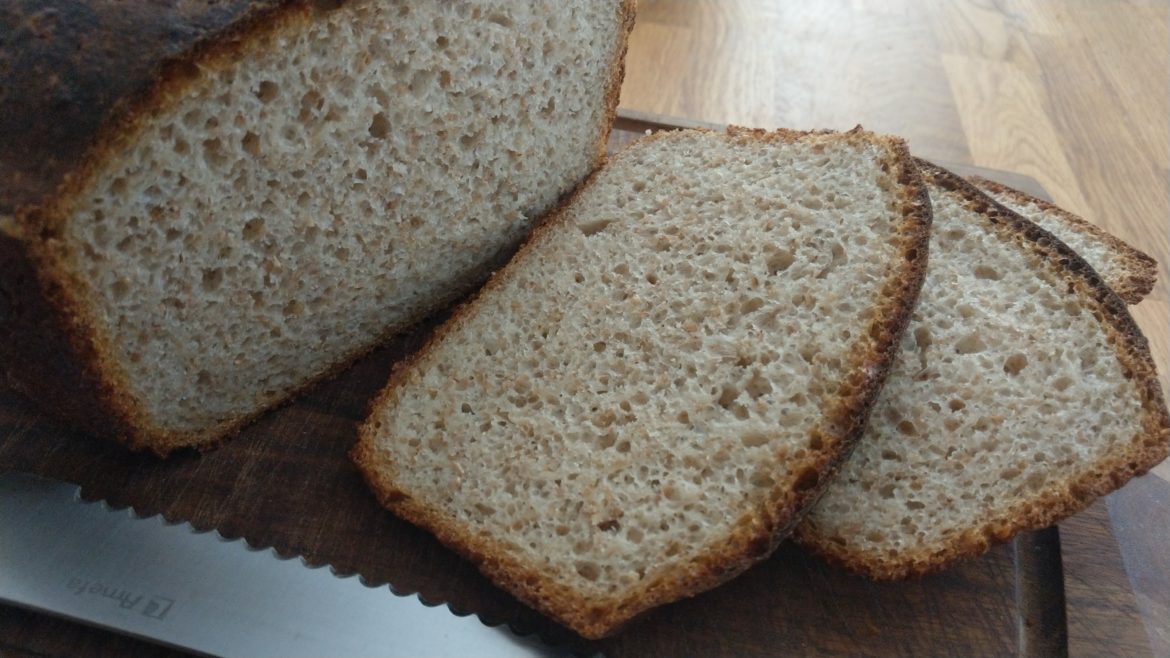 Ireland is on COVID-19 lockdown (and will be for the next couple/few weeks, it looks like), and our next grocery delivery isn’t until nearly the middle of next week, and there’s no telling whether there’ll be baking yeast in it. And yesterday we were down to our next-to-last packet of it. So I sighed and got ready to start employing stopgap measures.

…And a quick note here: if you’re presently drawing breath to say “But I saw a post about how to make your own…” or “No one is ever really out of yeast, let me tell you how…!” — then please don’t, because there’s no need. I’ve been baking bread casually since my twenties and much more intensively over the last decade (Peter and I simply decided in unison that we’d had it with supermarket bread, and when we found the most dependable recipe imaginable, that was that). At one time or another I’ve built levains and starters from scratch, worked with sourdough starters more than a hundred years old, and have caught and cultured wild yeast on two continents. I’ve even written fiction about yeast, Thoth help me.

Anyway, right this minute—as a busy longtime-work-from-home small-businesswoman who is usually hip-deep in several universes at once while also doing website management—my preference for day-to-day baking is plain old active dry yeast of the Fleischmann’s, Red Star or SAF type. These have been genetically tailored for their work and suit my needs perfectly—being predictable, reliable, and in no need of coddling or extra attention. To be told “All you need to do is mix together some flour and water and let the natural yeasts…!”, etc etc, is for me (at the moment) too much like someone kindly offering to replace my missing Lotus Turbo Esprit with a Trabi. I will cope just fine, but I won’t sing paeans of praise about the alternative strategy. So let’s not go there, yeah? As KP says, “Please and thank you.”

Anyway. What was plain when I got the urge to bake yesterday afternoon was that I was going to have to throw together a preferment, because the thought of actually using up that last packet of yeast was giving me anxiety. Fortunately, when doing the last bake I’d used only 3/4 of the package of yeast, and had set aside the rest for this very purpose. So:

(Stage 1) Find favorite handled soup cup. Spoon in a tablespoon or two of flour and that yeast, and stir it about well to get combined. Add about a quarter-teaspoon of sugar just to let the yeast know that, momentarily anyway, Life Is Unexpectedly Good. Add a quarter cup of water, or a little more if necessary, to make a thick paste. Then cover the cup (or other vessel) and put this whole business aside somewhere warmish for a couple of hours. (Note that no salt is involved in this procedure until making the actual bread dough, because the salt acts as an inhibitor and the last thing you want to do with the yeast at this point is get it feeling inhibited.)

(Stage 2) In a couple of hours there should be some bubbling going on. Stir the bubbles down, add half a cup of lukewarm water, enough flour to make another thick paste, and another quarter- to half-teaspoon of sugar, because keeping the yeasts extra happy/active at this point is smart. Mix it all up until it’s smooth and put the whole business aside for another couple of hours.

(Stage 3) Repeat the above routine one more time with about twice the ingredients, except for another half-teaspoon of sugar for the yeasts. Then off you go and spend another hour or so doing something else. If the bubbles aren’t pretty active in the bowl or cup or whatever when you get back, give it another hour.

(Stage 4) And now we finally start actual breadmaking. Measure out about 200g of wholemeal/whole wheat bread flour and 400g of white bread flour. Stir in 10-12 g of salt (usually about a scant tablespoon). Add to this about 2/3 of the starter and about 350ml of water, and knead by hand or in a mixing bowl with a bread hook until it comes together and is smooth and silky-ish. 15 minutes or so by hand: in a mixer, six minutes on low speed and six minutes on high. Add more flour if necessary. Grease or oil a big bowl: put the dough in it and turn it so it’s evenly coated: cover it with plastic wrap and put it somewhere warm and comfy to rise. (I wrap mine up in a foam throw from Ikea. Works great.)

Because of the lowered raising capacity of this yeast—which is still getting up to speed—the rise takes significantly longer than usual. In this case it took something like four hours for the sponge to fill my raising bowl, which was fine, because I was binging The Rise of Phoenixes (while oblivious to the potential pun, don’t mind me, I catch on slow sometimes) and the plotting and backstabbing had seriously sped up from the previous ten episodes’ everybody-is-poisoning-everybody-else-with-slow-poisons-while-snarking-at-them arc.

At this point I hit pause long enough to punch the dough down… or actually, smoosh it down: it was very soft and sloppy. It was also larger than my normal loaf, because I’d had a put a fair amount of extra flour in to stabilize it. It became plain that (a) it was realistically too late to wait through a second rise and bake last night—which meant an overnight “cool rise” out on the sink in the boot room—and (b) if I put it in a regular loaf pan / tin to do that, it would overflow the thing in the middle of the night and make all kinds of mess. So I oiled a three-liter Les Cousances casserole, dumped the sponge in there, covered it with a tea towel, and left it to its own devices for the night. Then I went back to my binging, though not before adding more water and more flour to what was left of the preferment, and just a few pinches more of sugar, because so far at least the yeasts had been behaving Very Well and deserved a treat.

When I got up in the morning and came downstairs, here’s what the casserole looked like: 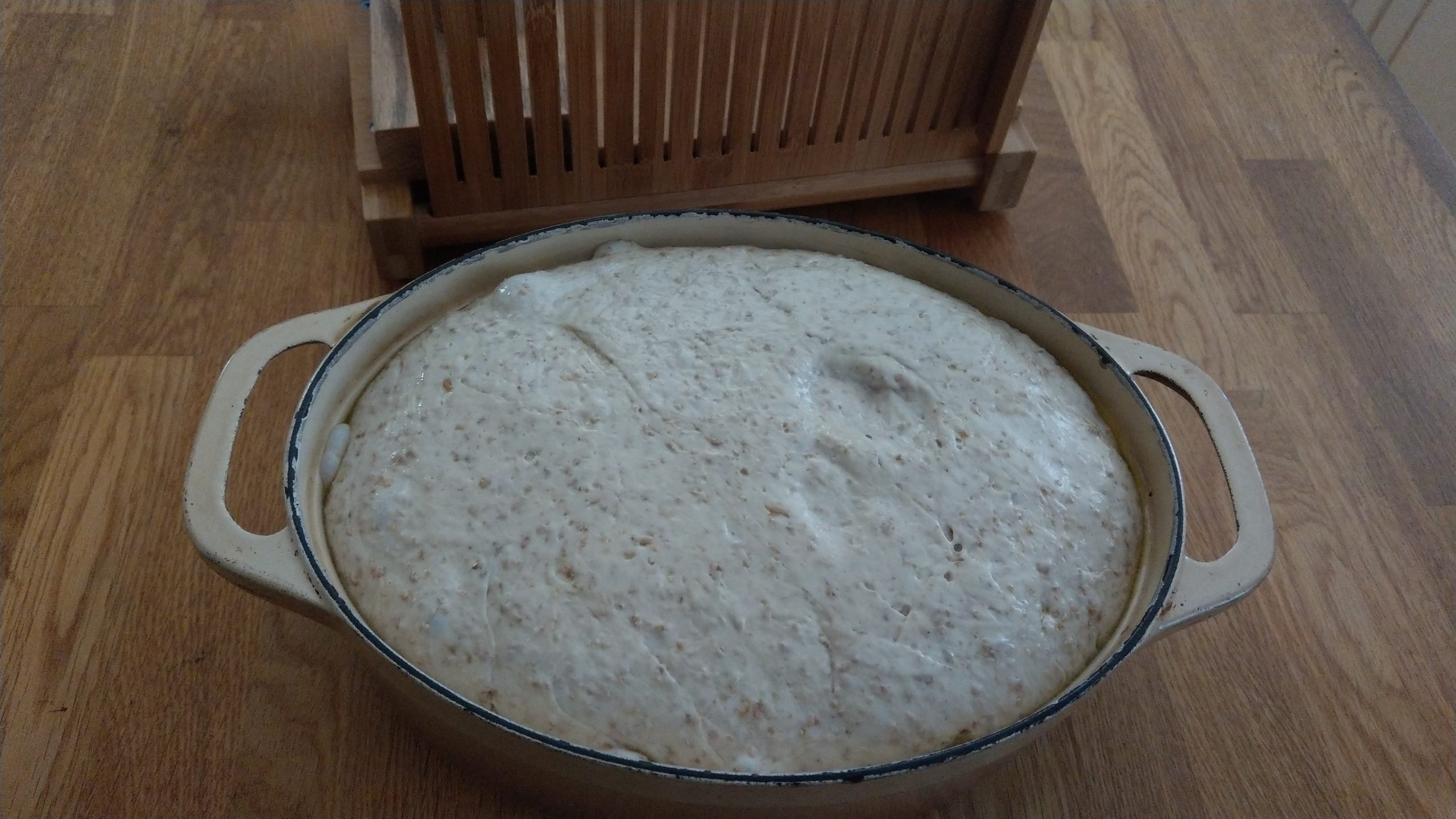 So it was plain that it was now time to bake, yay! Oven up to 200C, then (when preheated) slid the casserole in and for good measure threw about 150ml of water into the roasting pan at the bottom, to make some steam. Timer set for 50 minutes, and off to do some email and other stuff.

When the timer went off, this is what we wound up with: 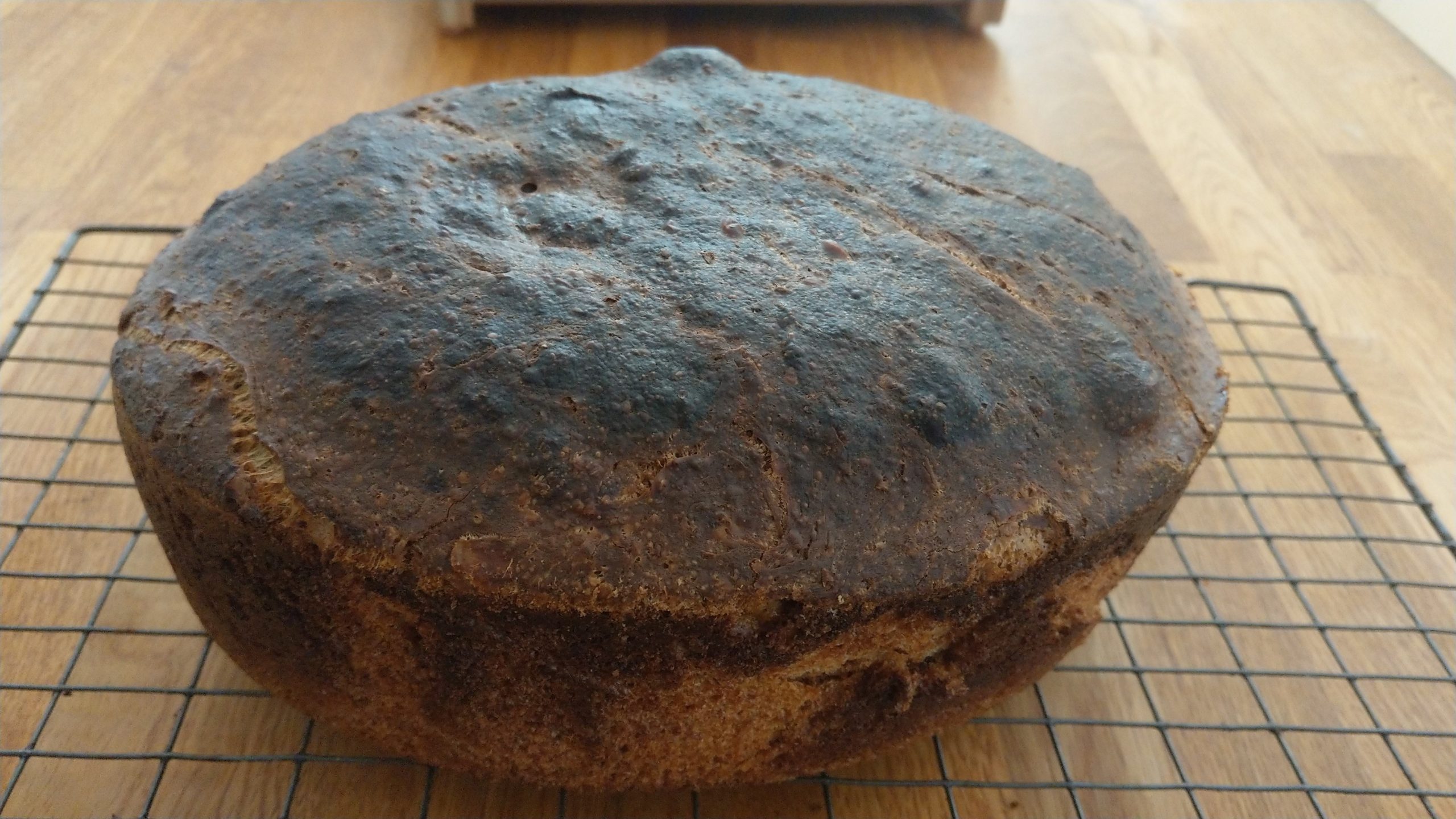 It took another couple of hours for the loaf to cool and stabilize enough to slice safely. It’s a peculiar looking thing, but Peter came along and pronounced it one of the best bakes of this kind ever. (He’s fond of the pot-baking end of things: he’s quite good with the New York Times no-knead recipe.) Having had a couple of slices, I’m inclined to agree. Light: a delicate springy crumb, nice and open in the usual manner of slow-and-cool rises: definitely tasty. The crust’s a bit aggressive, but a night in a bread bag will sort that out.

…So that’s one way to do it. That said: I still want my damn active dry yeast. Meanwhile, the preferment is sitting in the office window, enjoying the warmth from the wood-burning stove, and it’s getting to be time to feed it a little again. (Because an online associate caused me to think of the torture-a-cinnamon-roll concept just now, and a yeast-raised cinnamon roll can be pretty good. We’ll see what tomorrow brings.) 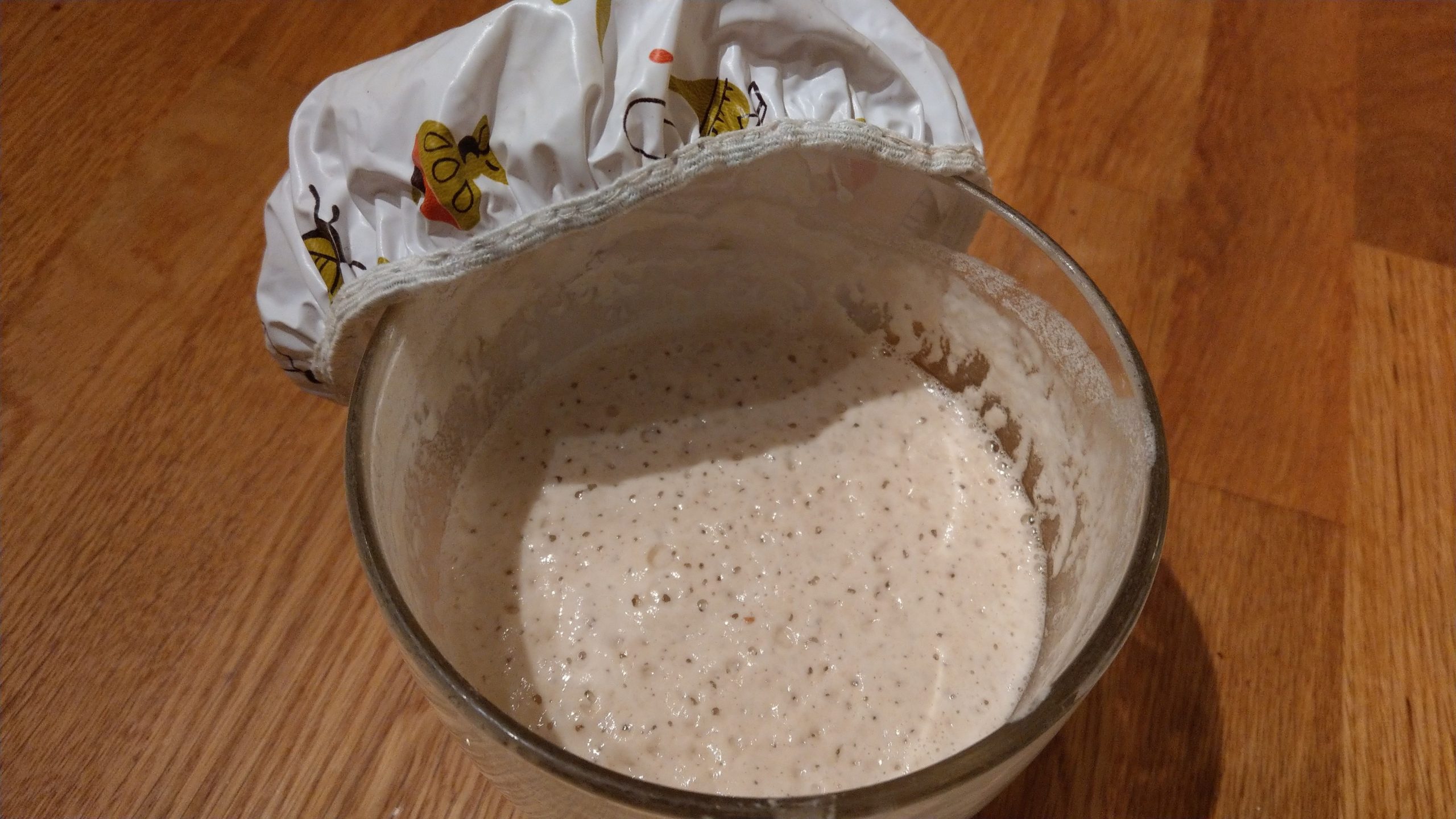 And for the moment, that’s all she wrote.

From the (forthcoming) FOOD AND COOKING OF THE...