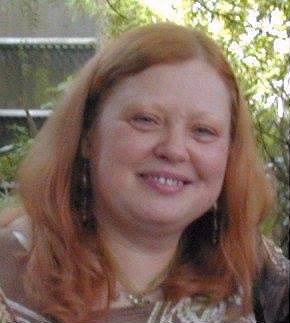 This is our friend Kim Knight – Kimmie, or even Kimmiwinkles.

Kim and her band of usual suspects were the concoms for the UFP series of Star Trek conventions in the UK, some of the best organised, smoothest-running and most fun cons we’ve ever attended.

UFPCon 1986 was the one where Peter and I met up for the third time. Not happenstance, not coincidence, certainly not enemy action; it was third time pays for all, but even then we were so very quiet and subtle that when we finally revealed our secret engagement…

…Kimmie, Ros and Ali already had champagne waiting on ice!

Kim visited us in Ireland, travelled with us to see a solar eclipse in Germany, met up with us unexpectedly in LA, and introduced us to amazing people. She was one of the most extraordinary people you could hope to meet — warm-hearted yet businesslike, kindly yet efficient, humorous yet hard-nosed, all wrapped up in one loveable, huggable package. In particular I remember one trip she and I took to Bern together, where we went shopping, ate out, caused the staff at the hotel where we were staying to mistake us for “such a nice pair of gay ladies” (I overheard them…), and generally acted like crazed teenagers pretending to be grownups. It was the Best Girls Trip Out Ever.

Kimmie died on the 11th of May 2014, from complications of the diabetes she bore and fought so gallantly. It would have been her birthday on the 31st of May.

The divine Miss S. and the Eggnog Recipe

Quick as a wink, the sly cat stole...