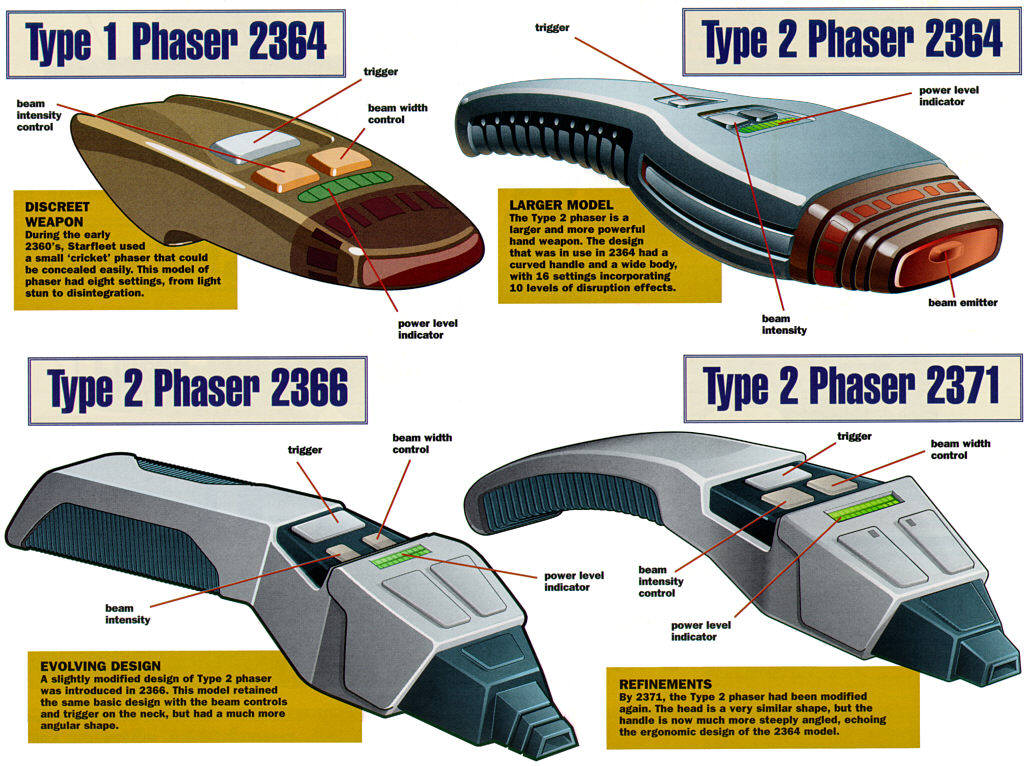 That’s my year made.

From the Online OED:

2. Science Fiction. A weapon producing destructive laser or similar beams (of variable phase); spec. a (usually hand-held) device whose output can be varied to produce different effects on a target (as stunning, annihilation, etc.). Also in extended use and in figurative context.First used in the U.S. television series Star Trek.

1966   G. Roddenberry Memo 26 Apr. in S. E. Whitfield & G. Roddenberry Making of ‘Star Trek’ iii. i. 272   Reference the mating of various components of the phaser weapons..when the hand phaser is mated to the pistol, they should appear as one weapon.
1967   Pop. Sci. Dec. 73/2   The main weaponry of the Enterprise is its banks of ‘ship’s phasers’,—artillery-size versions of the hand phasers and phaser pistols carried by the crew. These weapons are, of course, refinements of today’s familiar lasers.
1978   D. Bloodworth Crosstalk xxxiii. 256   The USAAF had brought down the first unmanned plane with a laser, and..had..been thinking in terms of light, chemically-operated versions that could be phased together… ‘Phasers?’ ‘Phasers. Right.’
1984   D. Duane My Enemy, my Ally vi. 85   Mr. Chekov, arm photon torpedoes, prepare to lock phasers on for firing.
1995   THIS Mag. July 21/2   His oddly reserved nature stands out… Whyte sets his phaser on stun, not kill. In print and in person, he usually gives a nod to his opponents before letting fly.
2000   Personal Computer World Dec. 481/2   The phaser rifle..easily vaporises most opponents in a spectacular orange echoey screaming fashion with a single shot.

…I get quoted often enough. (Normally in connection with potato chips.) But to be cited in the single reference that I use more than any other?*
Yeah. 🙂
*And to find out about it on International Literacy Day? There’s a certain pleasure in that too.
September 9, 2014
8 FacebookTwitterTumblrEmail 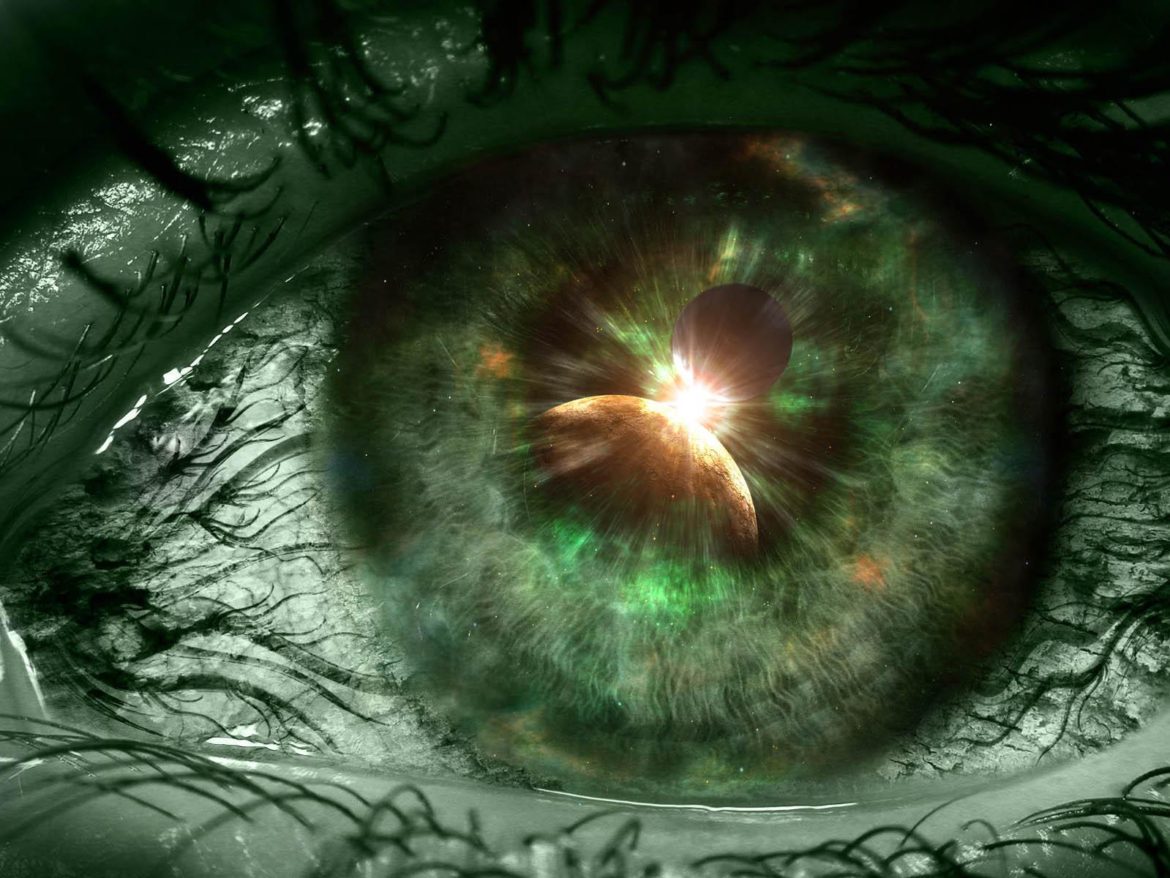 A week or so ago I was reading the Richard Burton translation of the Thousand Nights and a Night (or the Thousand and One Nights, or Arabian Nights, as some more modern translators would have it.) This is always fun for a whole slew of reasons — the language of its rendering, alternately graceful and robust; the vocabulary (as a translator Burton was often enough imperfect, but at least he was eruditely imperfect), and for the complexities of the story itself, never dumbed down or infantilized. (I was trying to avoid the word unexpurgated, but never mind, there it is. The Nights are full of sex and [yes, illegal] booze and general moral and ethical chicanery that never make it into the kids’ versions of the stories.)

I had dug in near the beginning to keep things simple. Well, relatively simple… since the composer of the Nights loves nesting you six levels deep in interlocking stories before you know what’s happened to you. This is exactly what happens when you come in at the famous-from-Disney’s-atomic-energy-metaphor “Tale of the Fisherman and the Jinn”. You know the one — fisherman casts his net and draws up a brazen vessel, a bottle stoppered with lead;  opens bottle and releases genie seriously pissed off at his thousand years of incarceration who is now intent on killing fisherman: panicked but still-wily fisherman tricks genie back into bottle and makes him change his tune. That one.

Anyway, before you know it the fisherman has tricked the genie back into the bottle and the genie’s trying to sweet-talk his way out of it again. “No way,” the fisherman says, “you’re just trying to pull the same crap on me that the Vizier of King Yunan tried to pull with the Sage of Duban.” “Oh really? What was that?” the genie says (rather desperately, as you might imagine). And the Fisherman then begins to tell the Tale of the Wazir and the Sage Duban. (And shortly the Sage will tell a story about King Sindabad and his Falcon, and King Sindabad in turn will start telling someone a story about the Husband and the Parrot, and you can see where this is going, I’m sure.)

Anyway. The King Yunan whose story the Fisherman now tells is proof of the old saying that Money Isn’t Everything and that it’s important to At Least Have Your Health. He has “a leprosy” (or at least a serious skin condition) for which his physicians have been treating him unsuccessfully for a good long while, making him drink noxious potions and rubbing him down with nasty unguents and sticking endless pills and powders down his throat, but nothing’s helped. At length, however, the Sage Duban comes through town. And he is

…a mighty healer of men and one well stricken in years… This man was a reader of books, Greek, Persian, Roman, Arabian, and Syrian; and he was skilled in astronomy and in leechcraft, the theorick as well as the practick; he was experienced in all that healeth and that hurteth the body; conversant with the virtues of every plant, grass and herb, and their benefit and bane; and he understood philosophy and had compassed the whole range of medical science and other branches of the knowledge tree.

So this guy is plainly the real deal. He visits the king, checks out his symptoms, and tells the King that he can cure him without pills or potions or lotions or other topical fuss. Needless to say, King Yunan is delighted and tells the Sage that if he can pull this off, he will be showered with gifts and rewards and will be made “a cup-companion and a friend” to the King. (Serious business, that, of being the one who gets to sit up late with a ruler and drink [illegal] mind-loosening booze and — theoretically — hear his secrets.)

So the Sage goes off and that night does mysterious medical and pharmaceutical things with, get this, a polo mallet. The next morning he says to the King, “Take this mallet and go out and play hard with your team today, and work up a serious sweat. The medication with which this mallet is impregnated will be imbibed by your skin and do its work. When you’re done, go off to the hammam and do your ablutions, and then go to sleep. And in the morning you’ll be cured.”

And as unlikely as all this sounds, that’s exactly how it goes down, and the King wakes up to find his skin “all clean as fair silver”. Needless to say, he is very pleased. And the predicted showering-with-gifts of the Sage begins.

But not everybody is pleased. Here Burton says —

Now the King had a Wazir among his Wazirs, unsightly to look upon, an ill-omened spectacle; sordid, ungenerous, full of envy and evil will. When this Minister saw the King place the physician near him and give him all these gifts, he jealoused him and planned to do him a harm, as in the saying on such subject, “Envy lurks in every body;” and the saying, “Oppression hideth in every heart: power revealeth it and weakness concealeth it…”

— but actually I’d lost the plot about half a sentence previously.

What a fabulous word! How vigorous and straightforward and personal and nasty! You can just hear distant echoes of someone spitefully tweeting U R JUST JELUS.

Question was, though: was this some coining of Burton’s (as he does that kind of thing when he feels the need) or something genuine and/or genuinely period, and simply misplaced? Because, for example, you can say that you envy someone and (in past tense) that you envied them. Why not this? Maybe it just fell out of usage?

I went straight for the Oxford English Dictionary for more data. And to my great delight, the usage is legit. The OED confirms it — under both “jaloused” and “jealoused” spellings, adding that it also meant “was suspicious of, suspected” — and cites examples dating back to the late 1600’s. One 1780 citation says, “The brethren did very much fear and jealouse… Mr. Sharpe”.

So this is a cool thing to know. My only regret is that I can’t think of a way to use it in something modern.

(Oh, by the way, the Sage Duban comes out of this okay. When the envious Wazir badmouths the Sage to the King, the King immediately realizes what he’s trying to pull, and says, “Ridiculous! You’re speaking this way from mere envy and jealousy, the way they say King Sindabad did.” And he would have started in right then and dumped us another level deep in story, except that

Shahrazad perceived the dawn of day
and ceased to say her permitted say.

…Which seems like a good idea at the moment. )