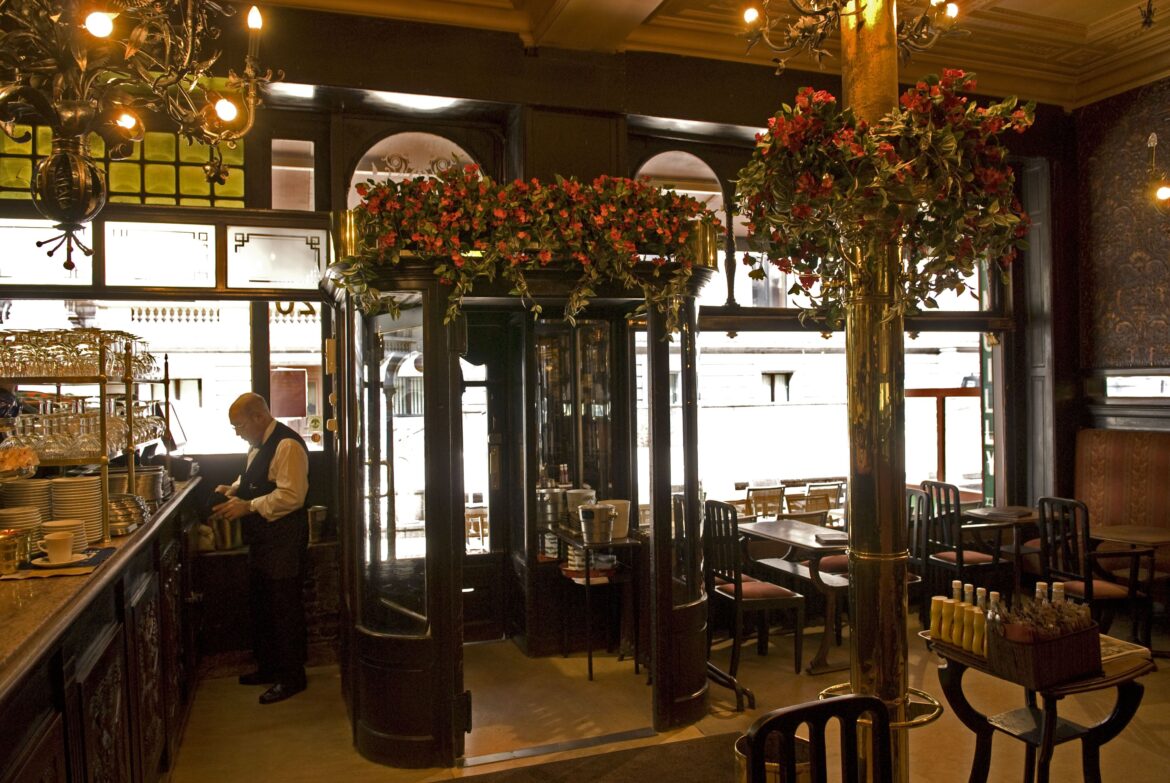 I mentioned this place in passing in a post some while back, and it really needs to have something more said about it, as there’s not nearly enough information online.

There are a lot of nice estaminets and bars in Brussels, but this one’s a favorite one for both Peter and me. Other such places will have more beers, or more food, or both; but none will so perfectly give you that “timeslip” feeling of having stumbled into another century. And there’s a cat. (And she’s a nice one.)

Le Cirio is the last remainder of a whole chain of restaurants founded by Francesco Cirio, a food entrepreneur who started the industrial farming and production of tomatoes for canning purposes in the mid-1800’s: the direct descendant of his company, now a multinational, still cans and ships GM-free tomatoes worldwide.

This branch of the cafe/restaurant was built in 1886, possibly one of the last in a series of eighteen establishments meant to serve as “tasting gateways” for Cirio’s products (there was always an industrial warehouse for the products nearby, and such alliances of Cirio-shop-and-warehouse existed as far away as New York, Berlin, Paris and London). All the others are gone now, but this one has resisted anything but the most minuscule changes since it was built. It is famous as the home of the half en half, which (for North American readers) has nothing whatsoever to do with dairy: it’s white wine and sparkling wine mixed one-to-one, a combination that may sound weird at first, but actually works very well. The cafe itself is a splendid den of perfectly preserved Art Nouveau: stained glass, ornamental brass, carved wood and marble-topped, iron-legged tables, with toilet facilities that are also gorgeously antique. Some of the wall hangings or tapestries are a little faded, the old mirrors a touch spotty: no one cares. The pace is leisurely. The music is — if not exactly 1890’s — also of an earlier time, more likely to be Piaf if anything else. People sit, have a coffee, drink, read their newspapers, chat, have a sandwich, gaze out the windows at the old Bourse building outside.

The first time I stopped in here, it was because Minou was doing that very thing. I mean, of course, “le Chat Minou,” the official Le Cirio cat, who lives in the apartment upstairs. Minou (it’s a French word for “kitty”) was tucked up in meatloaf mode on top of the espresso machine — plainly a smart move on a cold wet day — looking out at the pouring rain, eyes half closed. I was out and about looking for a cafe to write in, and I saw Minou and thought, “Why am I not in there?”

I went in and spent some happy, relaxed hours writing. I’ve been fairly often since. It’s not a big food place: mostly they have little sandwiches and such. (I like the croque monsieur.) Waiters in the traditional long white aprons patrol the room in a calm and alert way. Little old ladies drink the classic Belgian beers like Duvel. No one pays attention to one more writer working on a movie or whatever: they get that kind of thing all the time. The place fills, empties, fills again, all in an overarching sense of calm. At quiet times, Minou appears to check the spaces underneath the tables and see if anyone’s dropped anything nice. She is not one of those in-your-face, demonstrative cats: she is willing to be friendly if you feel like paying attention to her, but otherwise entirely willing to let you be. On a cold day, she’ll jump up behind the espresso machine again to take advantage of the uninterrupted view out the window. It’s all very sedate, just a short walk away from the noise and expense and tourist-trampling of the Grand Place.

So recommended. Stop in and have yourself a beer.

A side issue: just outside the front of the restaurant/bar, a little off to the right as you look out,are the glassed-in foundations of a medieval church and convent, unearthed by archeologists in the 1980s.

(Also: Probably I shouldn’t be surprised that the only comprehensive article on the Web about Le Cirio is in Italian, at their version of the Slow Food site.)