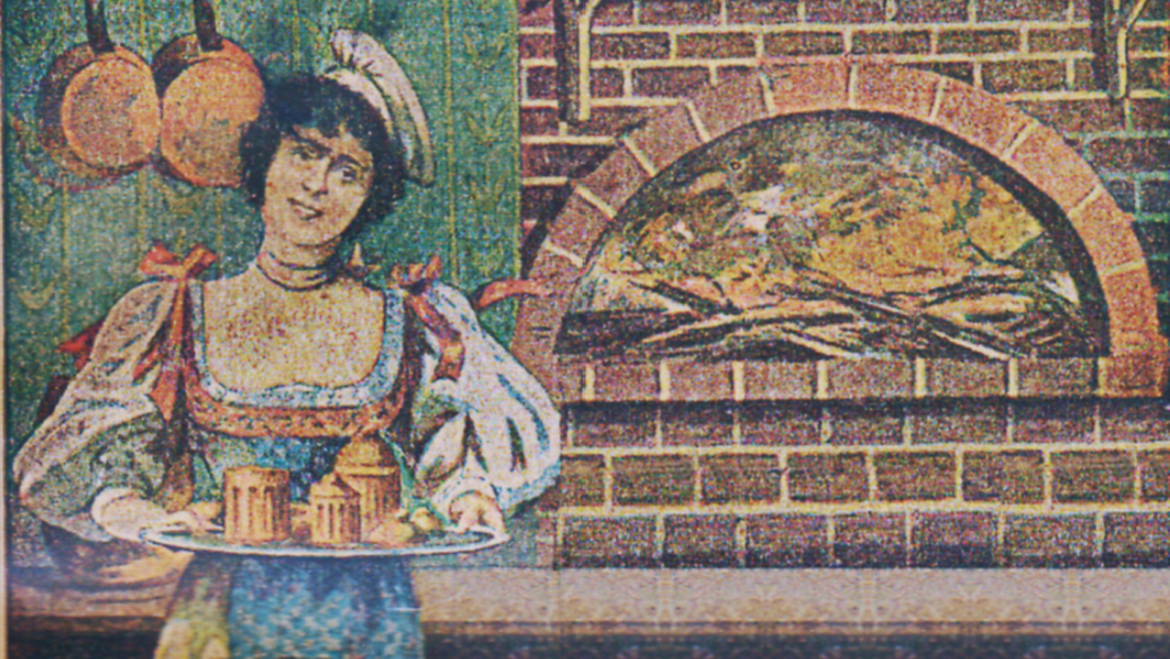 Those of you who follow me on Twitter or Tumblr, or who dip in here from time to time, will know that cooking and cookbooks are issues of interest in our household. Particularly the cookbooks. There are a couple hundred of them in the living room at the moment (and that’s after we weeded out some unnecessary ones and sent them off to the library at the end of last year). They span all kinds of cuisines and approaches to cooking, and a nontrivial percentage of them are pre-20th century.

I have to confess that the older ones are some of my favorites (and not just for the recipes: often because of the advertising that appears in them, or because of other associations—regional, historical, linguistic. For example: a covey of cookbooks in (Sursilvan) Romansch, bought as much for the language/dialect or vocabulary as for the regional specialties). US and European “community” cookbooks of the 1800s and early 1900s are also favorites of ours. And some such cookbooks get added to the collection due to having come up on the local radar by other means, often obscure.

Right now, for example, I find myself looking at a project I wasn’t expecting to need to add to my TBW pile: a full-blown translation of a French cookbook. This one has a bit of a resemblance, in approach anyway, to one we’ve had available for download at EuropeanCuisines.com for a while: Mrs. de Salis’s fabulous Savouries a la Mode.

Savouries, like the many other guides and cookbooks Harriet de Salis wrote during the late 1800s/early 1900s, was aimed at the “New Woman”—the lady of the house whose circumstances, for whatever reason, rendered her unable to afford the staff / extra hired help that were in some classes taken for granted in an earlier time, and without whom it was thought impossible to “keep house properly”. So recipes that might have otherwise been lost to us (except by the former household staff themselves writing cookbooks, which fortunately also happened) are preserved, in full detail, in de Salis’s works. And old recipes of this kind—dishes or treats that one might have expected to be able to readily have at home, once—are always welcome.

Now let’s veer briefly sideways. While researching Belgian waffles for our page on that subject at EuropeanCuisines.com—and particularly the Liège waffle that often falls through the cracks somewhat for North Americans, since a (non-yeast-raised) version of the Brussels waffle tends to be more popular there—I went looking for French- and Vlaams-language online waffle resources, and came across the venerable website GaufresBelges.com and its recipe page. Their recipe for a beer-based waffle caught my eye, and I was pleased to see that they’d credited the cookbook.

Having tested the recipe—and finding it not at all bad—I started wondering what else might be in that cookbook that was worth knowing about. So I went looking for it, and soon enough found references to “La Patissière des Petites Menages” online: but the book itself turned out to be not that easy to find. As usual, this made me more interested in getting my hands on it, not less. Finally I found a copy available through a listing similar to this one at the French version of Rakuten, and sent off for it. 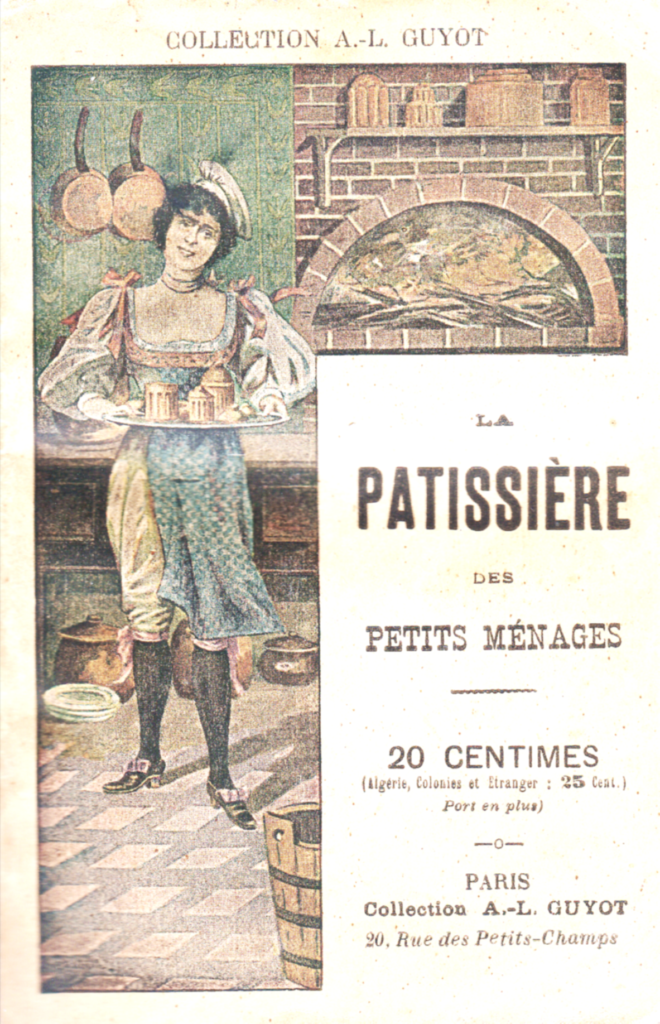 What arrived was a solid little paperback, old but very well made: the kind of thing you would have picked up from a kiosk or newsstand / newsagent of the time. The type is beautifully bitten into the page. The binding is sewn in signatures (and provoked immediate nostalgia for the long-ago days before paperback binding was universally done with glue). The 20-centime price tag translates, in modern buying power, to the equivalent of about a Euro. The book is 175 pages long: an introduction, a glossary, 140-odd pages of relatively brief and simple recipes for all kinds of baking that can be done in the home oven, a comprehensive index, an ad for other books from the publisher (A. -L. Guyot), and an ad for a company selling accordions and zithers.

…As you page through it, it becomes obvious that in this cookbook’s recipes the emphasis is on being able to make your own slightly-specialized goodies at home, without having to go down to the shops (or the baker’s) for them. (Which is perhaps why the lady on the cover isn’t wearing traditional baker’s togs, but bicycling bloomers.)

Peter, who has a university-level French course under his belt, kindly took a run at translating the introduction.

As we announced, this “TREATISE ON PATISSERIE” completes our “COOKERY FOR SMALL
HOUSEHOLDS”, and we hope it will receive the same favorable reception.
Even in the most modest homes, wives and mothers will doubtless thank us for
providing means to treat their loved ones by enhancing the daily menu with
appealing delicacies to delight young and old.

At family reunions, or where groups of parents and friends are invited to a party for a wedding, a baptism, or other happy occasion, it will be a pleasure for any housewife to make by herself and inexpensively (without resorting to the baker’s oven), some tasty appetisers: PASTRIES, PIES, VOL-AU-VENTS, succulent SWEETS: DONUTS, CHARLOTTES, MERINGUES, TARTLETS, or fine DESSERT CAKES: BISCUITS, WAFERS, MACAROONS, FANCY COOKIES; even aristocratic ICE CREAMS, SORBETS etc. …

Finally, ladies, thanks to the recipes contained in this volume it will be easy to create
a domestic pantry abundantly supplied with LIQUEURS, SYRUPS, JAMS, FRUIT PRESERVES
and CANDIES, which will be all the more most appreciated when prepared by your
caring hands.

We have done our best to offer you a useful and pleasant manual in clear and
practical form: we hope we have succeeded!

The biscuits (cookies, a North American would say) and wafers particularly have my interest: but everything else looks good too. I look forward to getting to grips with the work of translation, a little at a time (because baking is one of the ways I get some of my writing work done. You’d be surprised how much character work you can deal with just while kneading bread…). When everything in the book has been translated, we’ll make it available in unadorned form for download at European Cuisines, and possibly bring it into e-print at Amazon as well. (And I’ll post about it here as well.)