Bye Bye Birdie…?
I’m on Mastodon
On becoming a Star Trek novelist
CrossingsCon 2022
Today’s bit of #YoungWizardsMeta
Good trouble
Fanfic Rye Bagels
At last: the New Millennium “SO YOU WANT...
Thirty-five years
Newark
Quiche Lorraine
Available again: Signed Books Direct!
Of The Time There Was Only One Bed
Now at Amazon in paperback and Kindle ebook:...
Parmesan Biscuit Recipes
Star Trek and Sespe
DiscworldGermanypublishingStar TrekStar Trek and other licensed propertiesthings that piss you off 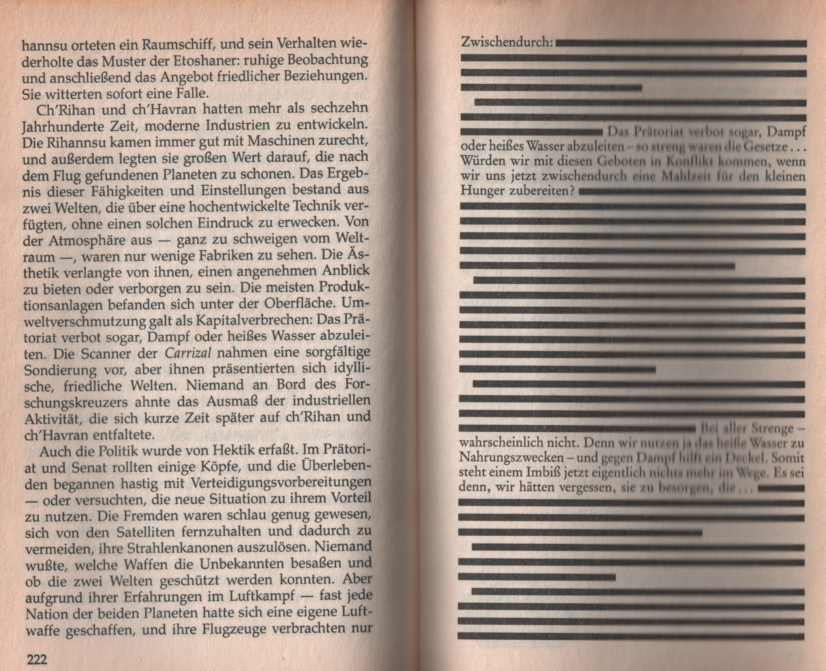 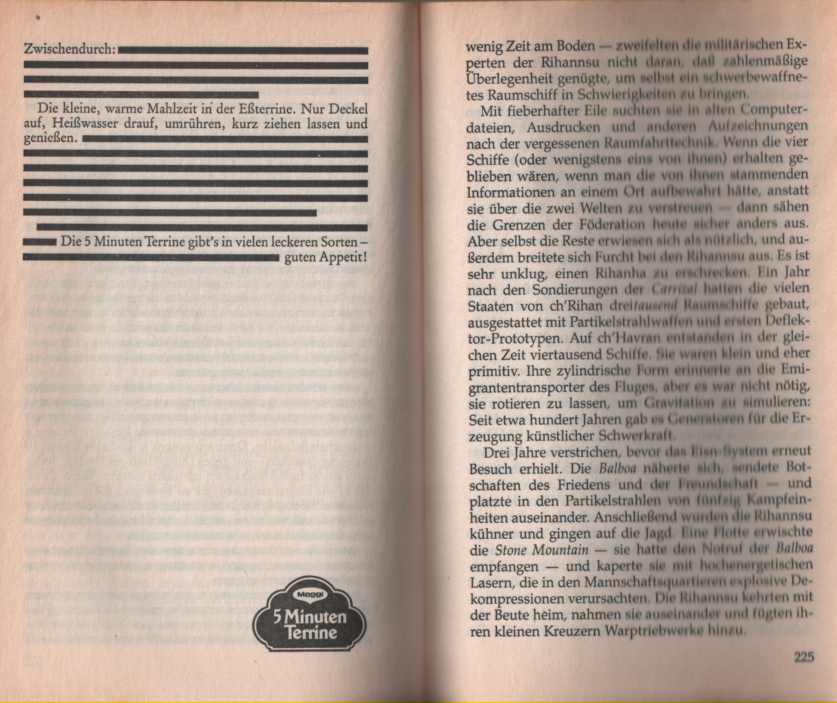 If the above (and below) images look a little bizarre, well, they should. They’re from long-ago German editions of My Enemy, My Ally and The Romulan Way into which the publisher inserted soup ads.

The story came up again briefly in a series of posts over at the forums at Mark Reads, and I thought I’d store the images here now that I’ve got the scanner seeing sense (short version: disagreement between new printer and old legacy TWAIN driver, never mind the long version, too annoying, solved now).

To quote the original posting:

...It was in or near this chapter of the German translation [of Terry Pratchett’s Pyramids (“Pyramiden“) that Peter ran into something that made our conjoint blood run cold: a soup advertisement.

Maggi Soups were at that time in some kind of pestilential relationship with Heyne Verlag (then the German publisher of Terry’s books, BUT NOT FOR LONG), and Maggi had taken to inserting little soup ads into the plots of books Heyne were publishing. I knew this because they had stuck one into the middle of the German edition of The Romulan Way (a.k.a Die Romulaner.* One minute things are normal on the Bridge… the next minute, Mr. Sulu is wishing he had a nice cup of soup. GOD I wish I was not making this up. …The altered passages were instantly identifiable by page-wide black spacer bars inserted into the text to make them fit into the flow of the printing.

So we picked up this copy of Pyramiden as we were passing through Zurich, and we were on our way to the Jungfrau, and in the hotel that night in Interlaken Ost, Peter was paging through the book… and there were the Black Lines. And so he called the Pratchett residence, and Terry was out, but he got Lyn.

And Lyn, being a sensible woman, didn’t believe him at first. Because who would dare pull crap like that with Terry? So Peter read the altered text to her, translating as he went. And Lyn’s mouth fell open, audibly. She said, “I’ll tell Terry when he gets home.” And when Terry got home, he straightway called Colin the Agent of Doom, and Colin called Heyne, and shortly Terry was not with Heyne any more. AND SERVED THEM RIGHT.

It was a pleasure to do Terry that service, but a pain in the butt that it had to be done. Seriously: SOUP??

…We no longer have that copy of Pyramiden, alas: it was sold long ago at a Discworld convention charity auction. But we still have the Rihannsu books in question, so now you can see what the pages looked like. Behold: one of the more sordid yet somehow mean and small and pitiful examples of corporate greed you’re likely to see.

*I keep thinking the “a” in “Romulaner” should take an umlaut. …Never mind. 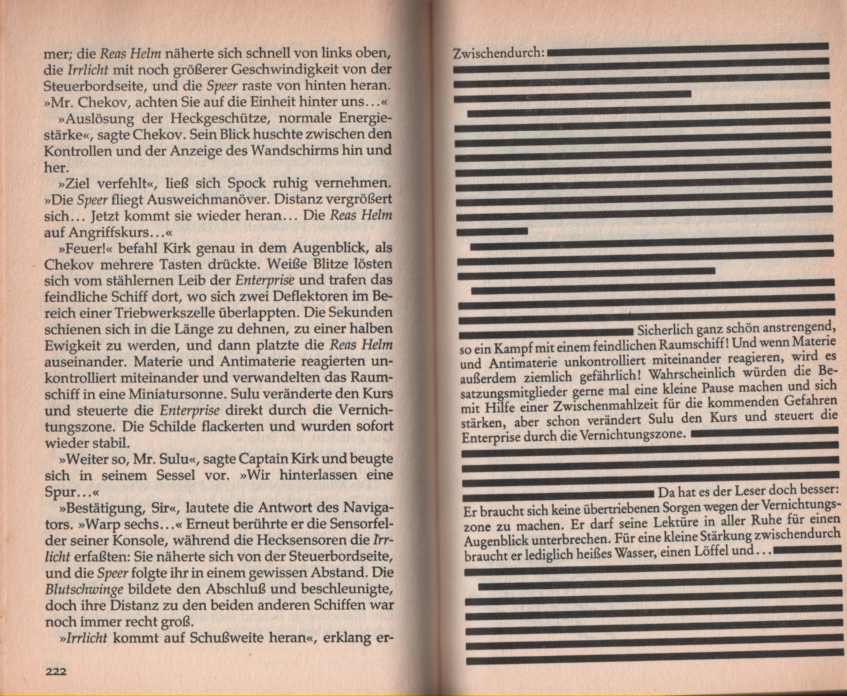 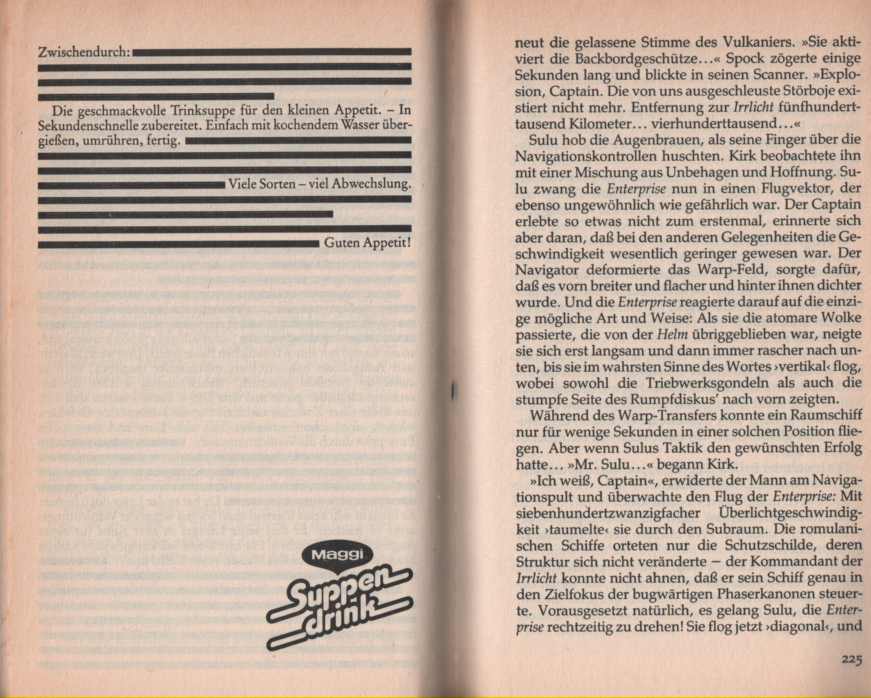 Mjolnir the Mighty and the Worthiness Issue

Forbes: not a bad way to start the...

The Underberg Ad: “Through the Night to the...