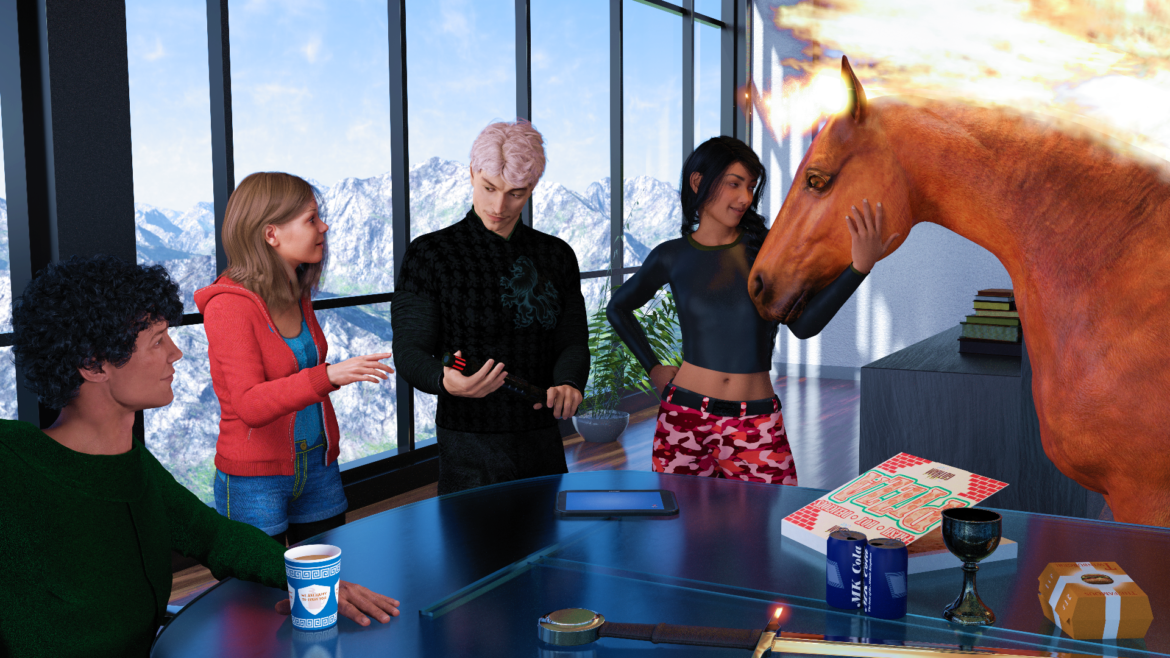 So I was setting up some promo art for an ebook sale that’s going to be offered on Tumblr only. Nothing fancy. The Ebooks Direct “office”. Various characters. Paused the render in the middle to handle some minor lighting and design issues.

And realized abruptly that I have way, way more serious things to worry about than lighting.

I have put Carmela Rodriguez (in however meta a sense) in the same space as Sunspark.

…This could get dangerous very quickly. In fact, both these universes may have already been significantly destabilized, and we may all already be doomed.

Consider it. One of these two beings is the young woman who, having just barely discovered that alien species exist, more or less immediately both ruthlessly snubbed a visiting alien prince and (you could make a case) started dating a shrub. This is the same young woman who derailed a potentially galactically destabilizing invasion of a vital infrastructural transport facility with only her wits, a sidearm and a half-kilo bar of Valrhona chocolate. The young woman who quietly incorporated the planet Earth to entitle it to Galactic safe-haven legislation that would protect it from interstellar aggressors. This is the young woman who shot the Lone Power point-blank and then snickered and said “Oops.” …A bold person. Decisive. Increasingly addicted to thinking outside the box, at least partly for the delights of continuing to freak out her wizardly little brother.

The other of them is a shape-changing, gender-fluid, nearly-immortal creature of potentially-devastating destructive power (their mental shorthand for their name is a fucking CME, for Goddess’s sake) whose major characteristics are an insatiable curiosity about human beings and their doings — particularly the ones associated with relationships — and a rather flexible sense of the permanence (or otherwise) of death. A dangerous person. Fun-loving. Always open to something new. And routinely hot to (ahem) trot.

…And their two universes both have viable worldgating systems.

It’s therefore a fair guess that it would be only a matter of time before they met, as both universes in question seem to have a tendency to solve for (shall we say) maximum drama. All it takes is an afternoon in the office when one of them has turned up to inquire where the hell is the shiny new space armor she was promised, and for the other lot to be passing through to discuss, I don’t know, the upcoming Middle Kingdoms cookbook or some damn thing. And they run into one another and introductions are made.

My only point of certainty on this is that, knowing her past history, Carmela would instantly rev up her flirting engine and get busy. Once they got over the initial shock, Sunspark would be completely charmed. The whole initial interaction would most likely look a lot like Rapunzel’s rapprochement with Maximus in Tangled. And Thoth only knows what would happen after that.

And the joke is that I didn’t even see this happening. I started setting up the scene and rendered it once and moved the two of them closer together, strictly to get them more toward the center of the shot… and it was already too late. A little closer. Yeah. Closer than that. Friendly, direct look. Head up. Keep the mane out of the way, they wouldn’t want to set her hair on fire…

…And then when I was looking at this rough render I started wondering why Freelorn’s eyes weren’t pointing quite where they should have been. He was meant to be looking at Nita as she explains something about Carmela’s sidearm to him. But he’s not: he’s sort of halfway looking at Herewiss, and the expression is the kind of, “What? What is it?” look you give someone close who’s reacting to something in an unexpected way, and you’re trying to find out why. But Herewiss’s attention is entirely elsewhere than on any discussion of sidearms, because he’s watching that happen across the table. (And finding it amusing. Damn the perceptive s.o.b.! Dusty’s always seeing these things before I do.) 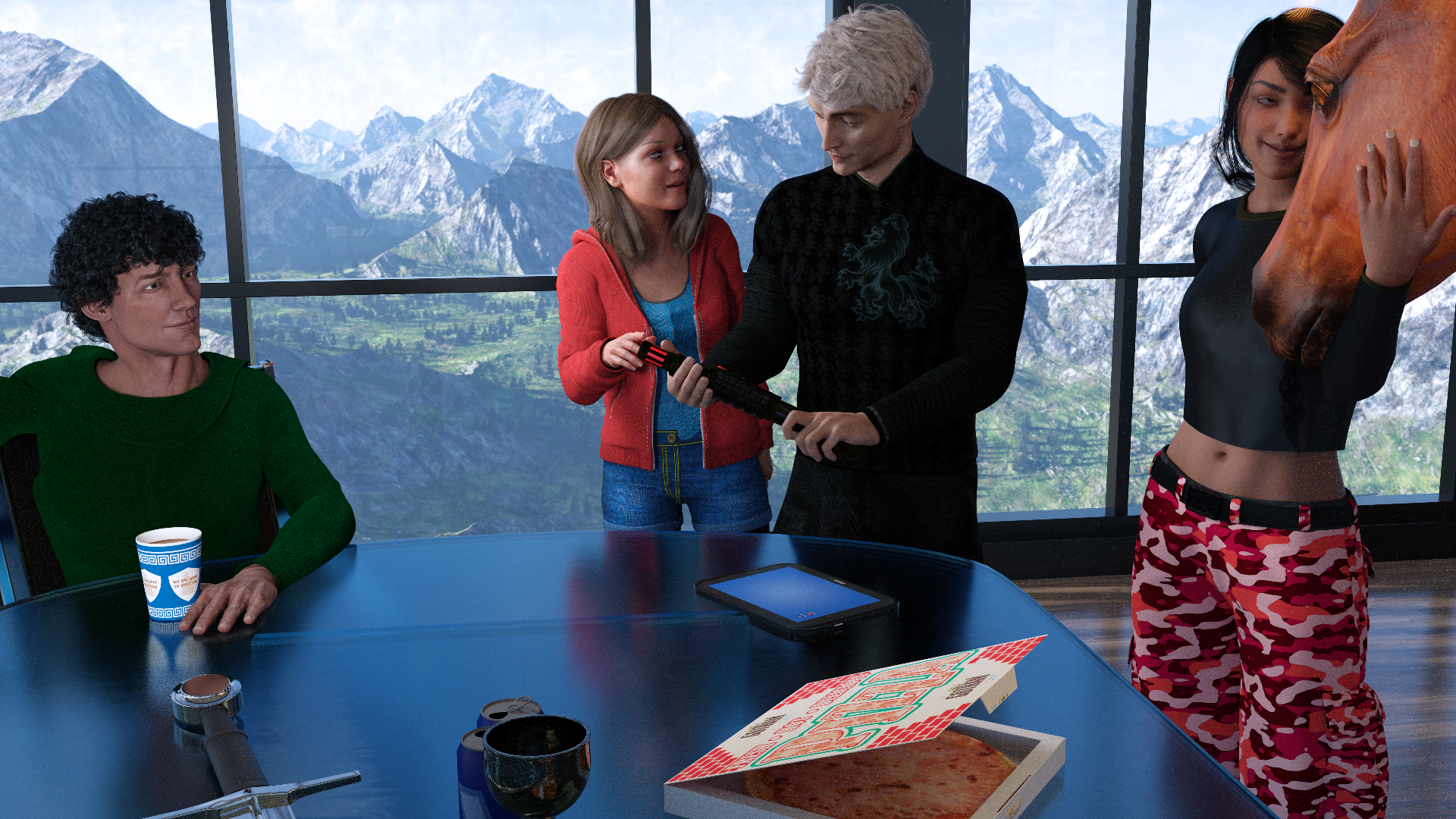 Herewiss’s pose is imperfect in angle and lighting, as it wasn’t originally meant to be shared. Aaah, who cares.

…Whatever that is. They look like they’ve already reached at least the “Do you want to go out for coffee?” stage. What the next stage looks like, don’t ask me. I just work here.

(headclutch) Now I’m wondering if this galaxy’s going to wind up with a new Empress or something. And in which universe. (Or if in both…)

The Transcendent Pig on Air Guitar