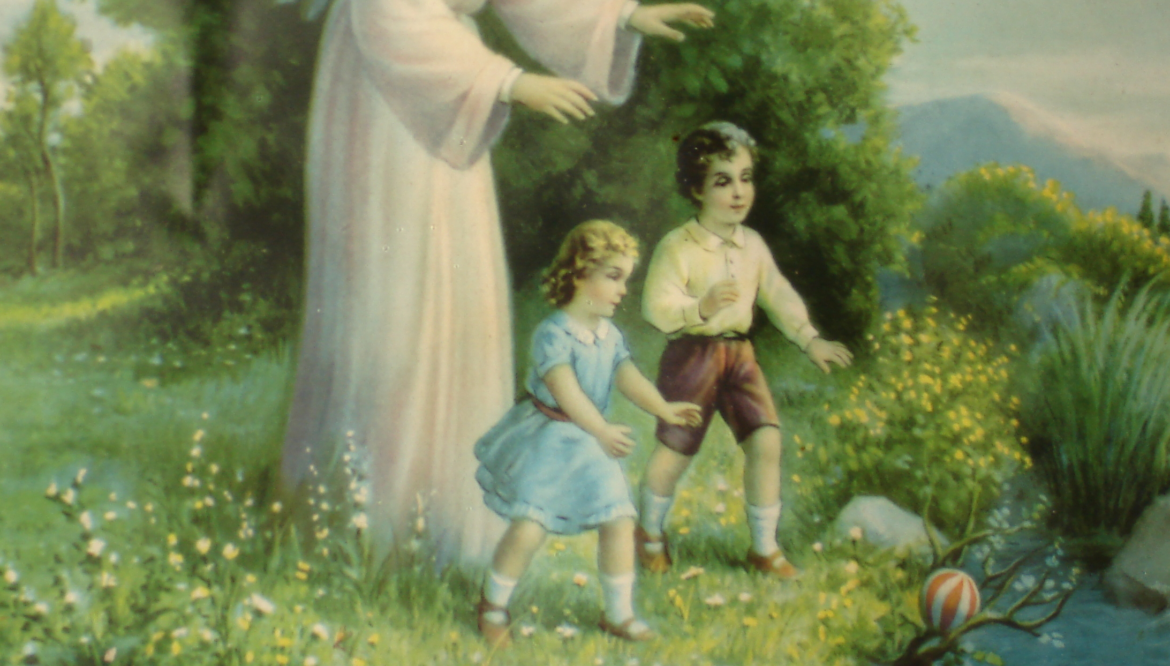 We saw this while in the excellent Martinsbräu in Freiburg im Breisgau, that jewel among German cities — possibly the most Mediterranean of the cities of the German south.

The whole place is downstairs one level, under the busy city food market above. There are booths and tables set near the big copper brew kettles (the Martinsbräu is a microbrewery) and off to one side, by one of the big tables, pictures of angels are hung on the far wall.

Theoretically, the various angels are supposed to be protecting their charges. But some of the angels look… a little ambivalent. 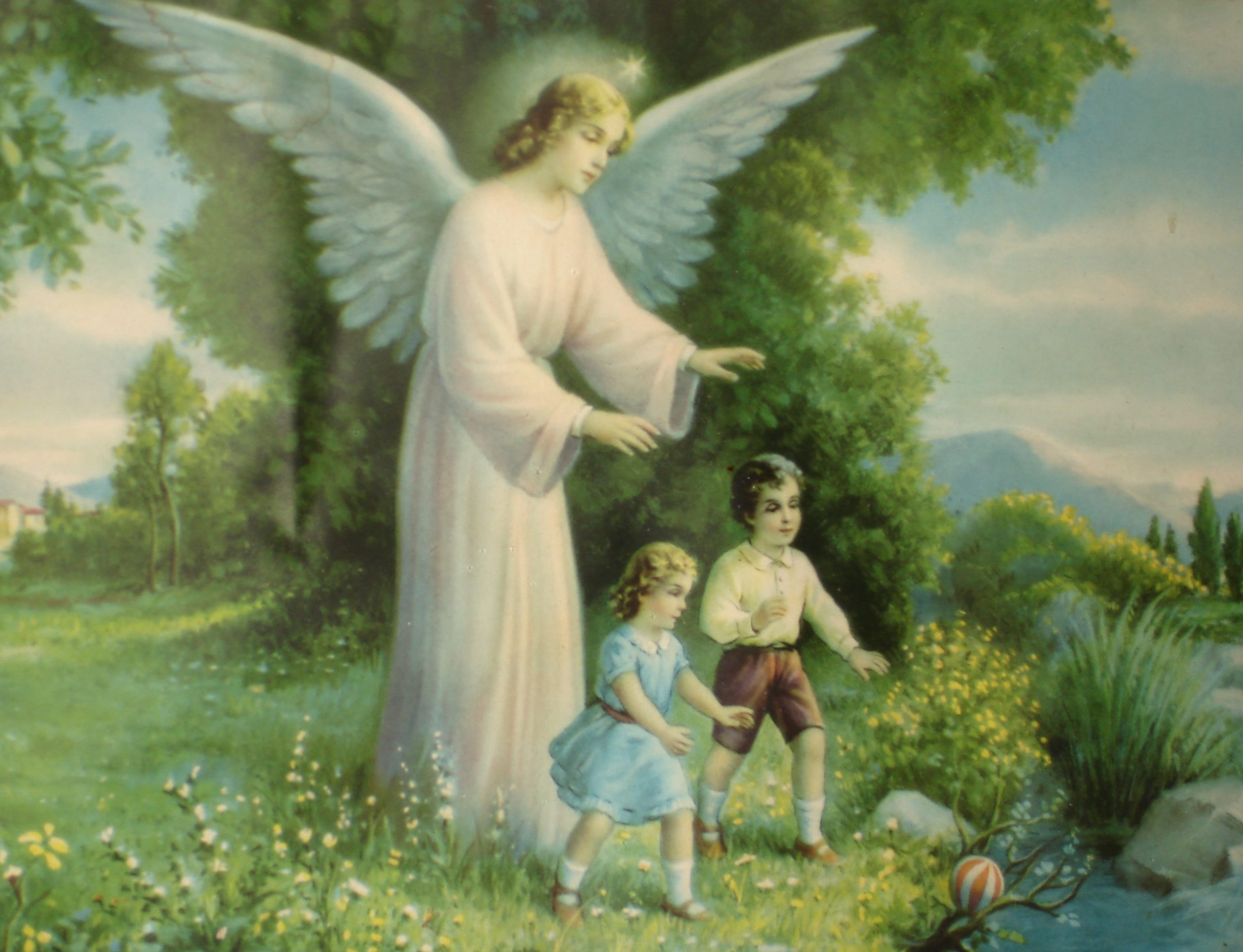 A LOL for the day

Things to do with the Moon

So Star Trek is corny. So what?

Or it’s corny this year, anyway. From Reuters: A British fan of the cult TV show “Star Trek” has boldly gone where no man has gone before and created a giant maize maze dedicated to the program.

…I foresee many, many such strange things happening this year to celebrate the 40th anniversary of Trek. (Such as the last of the Rihannsu books coming out.)

Busy busy busy today, (yes, finishing chapter 4 of TBM, for those of you who’re wondering…) but not so busy as to fail to note this: Flickr has gone into gamma. Yay! 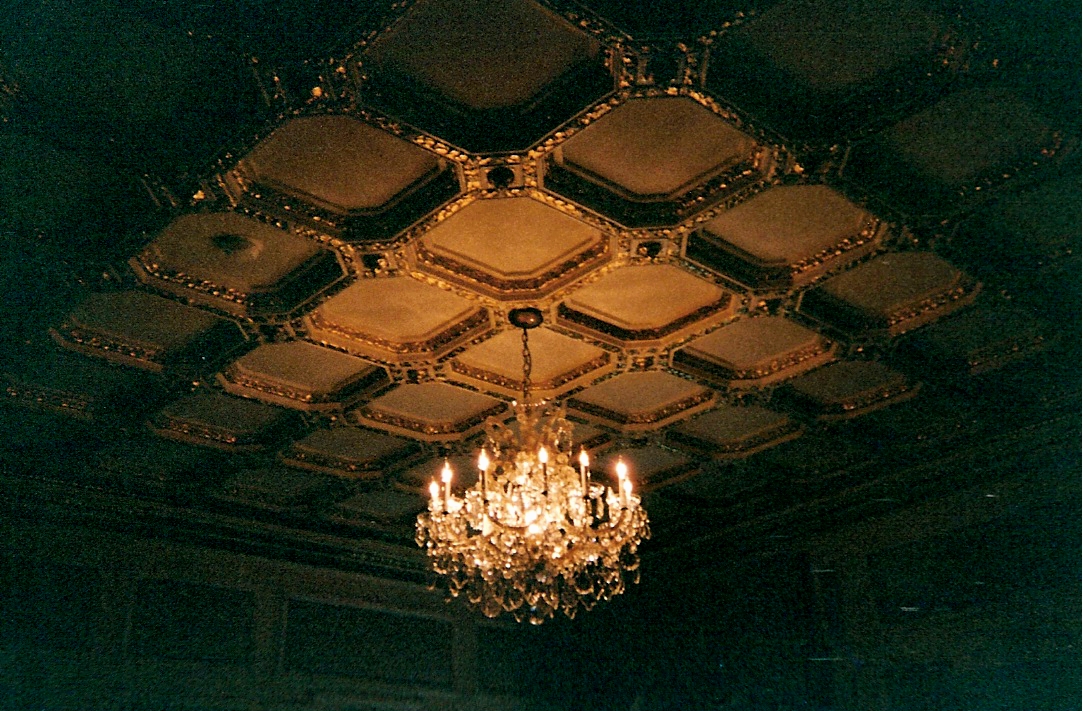 In July of 2003 I was called to LA to do some rewrite work on Dark Kingdom: The Dragon King (also known as Kingdom in Twilight, Sword of Xanten, Die Nibelungen, Ring of the Nibelungs, The Ring, and about every other name you can think of during its developmental period). There’s not much to say about that except that it was really hot in LA that week.

On the way home, though, something unusual happened. Normally — whether traveling alone or with Peter — the plan on the way back to Ireland is to break for at least a night in New York: partly to dump a little of the eastbound jetlag, partly to get a little shopping done — and for me, partly to touch base briefly with a place that’s very important to me.

I had a room booked in the Plaza for that particular one-night stay: partly because I’d always liked the place since I used to live in NY, partly because I hadn’t been there for a long while. And partly just a hunch that this would be a good thing to do.

Initially I found myself wondering about the validity of that hunch, since when I went to the check-in desk, the computer had no record of my reservation. The lady behind the desk looked extremely chagrined. I produced my printout of the reservation, left it with her, and said, “Don’t sweat it: I’ll go to the bar and have a glass of wine or something. Send someone for me when you’ve got this sorted out. I’m in no rush.”

She smiled at that and I went off to the bar, where I spent a pleasant half hour talking to the barmen (two of whom were Trek fans, and one of whom knew the Rihannsu books and started querying me in depth about linguistic matters). Eventually a bellman materialized and said, “They’re asking for you at the desk…” and I went off to see what had happened.

When I got to the desk, the lady there said to me, “We’ve got it straightened out now. And since you were so nice, and you seem to be the only person here today who isn’t in a rush…” And she handed me a room key. “Room 408.” Oh, an upgrade, I thought. Cool. I thanked her and went upstairs…

….and found, inside the door, the room you see here.

I had no camera with me, and the phone I was using then didn’t have one either. After staring around in complete gobsmackedness at the marble (working!) fireplace, and the riot of gold leaf that seemed to have been applied to every spare surface, I dumped my stuff and went down to the Plaza’s gift shop, where I bought a cheapo disposable camera. Then I went upstairs to take some pictures.

The camera, unfortunately — as you’ll see from the only few images even worth reproducing — wasn’t up to much. Nonetheless, here are the few pictures that were worth looking at. (Here’s a link leading to the Flickr photoset of three images and two views out the room’s windows, both wonderful vistas of Central Park.)

I showed Peter these pics when I got home, and we resolved to come back with a much better camera and try to stay in that room again. But the next time we passed through New York, I was stunned and horrified to find that the hotel had been closed. It was going to be turned into condominiums, I was told.

I spent a significant portion of that short visit cursing under my breath every time I thought about it. It turns out, however, that many other New Yorkers were as annoyed by this possibility as I was. After much noise and furor, including the involvement of the Mayor (and I believe the threatened involvement of the city’s Landmarks Commission) the situation has shifted somewhat, and the building will once again be a hotel — though a much smaller one. However, the rooms with Central Park views — meaning this one — are all going to be condos. So much for any possible return visit. Never going to happen…

The only question that lingers in my mind now is: will this room’s amazing decoration be left as it is during the conversion? I hope so.