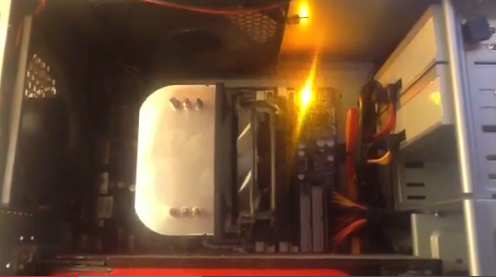 Those of you who follow me on Twitter may have noticed an uncharacteristic outbreak of annoyed language the other morning.

Well, this was the cause.

ETA: Secondary to all the below, and after no steps taken at home proved useful, the machine is going to be heading back to its lovely builders for service… so we’re having a sale at the Ebooks Direct store to “celebrate”. Details are here.

…I have two computers. One is a Samsung NC10 netbook on which a surprising amount of writing gets done (because it has a lovely keyboard; while I do dictate a lot of my work in Dragon Naturally Speaking, sometimes you just want to type, and the Samsung is the best machine in the house for Just Typing on). The other computer is a desktop named Calanda, as all my desktops are these days. (For the curious: Calanda is both a [theoretically] haunted mountain near the Swiss city of Chur*, and a Graubuendner beer brewery that produces a very superior dunkel and a lovely weissbier. All my other devices except for the iPad (Spot: of course it would be Spot) are named after characters from Tenchi Muyo. The netbook is Ayeka, the phone is Tsunami, etc etc.)

…Anyway. The present Calanda (II, or probably III at this point) is the first custom build I’ve ever owned, made by Scan in the UK: a lovely machine. It has never given me a lick of trouble. (Well, the video card has, but that comes under the “Occasional Wobblies / God Knows Why It Did That / Maybe It’s Sunspots / Never Mind, It Got Better” class of problems. It did get better.) Despite many years of home-building our machines, I’ve never had the urge to do anything with it except crack the case occasionally to do a little dusting.

And everything has pretty much been hunkydory until a week ago today, when in the middle of some website work the display froze, then went black. And then the machine rebooted itself.

Fine, I thought. This happens very, very occasionally. No problem.

So I forced the machine off, pulled the power cord, waited, did deep breathing for a bit, then plugged the cord back in again and hit the Go button.

…Now, over twenty years or so of building PCs from the bits up, I’ve seen most kinds of errors they can throw… drive stuff, motherboard stuff, memory stuff, slot stuff. But this was a new one on me. And when I realized this, and that it was really problematic due to several projects I have working right now that really need the big machine rather than the netbook, several things happened in sequence.

(a) A great disturbance in the local Force: as if a single voice had cried out in anguish, and then shut right up because the crying-out-in-anguish stuff upsets the cat.

(b) The above distressed tweet. (Followed by much helpful advice from various people who saw it and the ones that followed, which were a shade more coherent.)

(c) Crack the case, look inside, and start diagnostics.

(d) Breathe some more and decide to wait until today to start doing anything whatsoever about it: because trying to get anything tech-meaningful done in Ireland (or to a lesser extent in the UK) on Good Friday is a challenge not worth taking.

…So I started working my way down the least invasive of the suggestions this morning. On cracking the case I found the original tight beautiful build, undisturbed (I’ve never added anything because the original build had everything I wanted). I had a careful look around to make sure that there was nothing obviously burnt, oozing or otherwise deranged. And nothing was.

Then I hit the button and let the machine run through the cycle a few times. The results you can see in the embedded video.

The thing most of note for me: the processor’s heatsink fan will not run. It tries, but fails. There are a number of things this implies, but I need to talk to the guys at Scan who built the machine before I go doing what my mother used to refer to as “jumping to concussions”.

Meanwhile, for those of you who were trying to work out what was wrong: that’s what we’ve got to work with so far.

…Also, for those of you who wanted system specs to assist you in diagnosis: here they are. It’s essentially a system built for fast graphics work (it spends a lot of its spare time rendering in Terragen, in particular) but also obviously handles WP work at damn-near-blazing speed.

…So there you have it. To those of you who’ve tried to help so far, many thanks!  🙂

And now I’m off to let Moffat make me scared of WiFi.

ETA: Secondary to all the above, and after no steps taken at home proved useful, the machine is going to be heading back to its lovely builders for service… so we’re having a sale at the Ebooks Direct store to “celebrate”. Details are here.

*Disambiguation: for the worldgating complex, see the Chur entry at ErrantryWiki.

The Effect of Dimensional Transcendence on Mozzarella Cheese