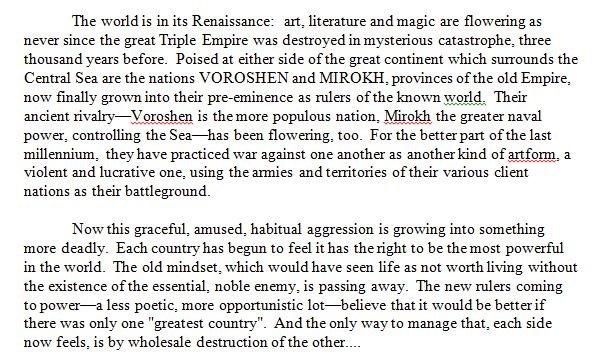 …you’re tidying up some paperwork and you stumble across a (1999) printout of a novel proposal that you had completely forgotten about, including outlining, notes, and detailed timelining for the six main characters… 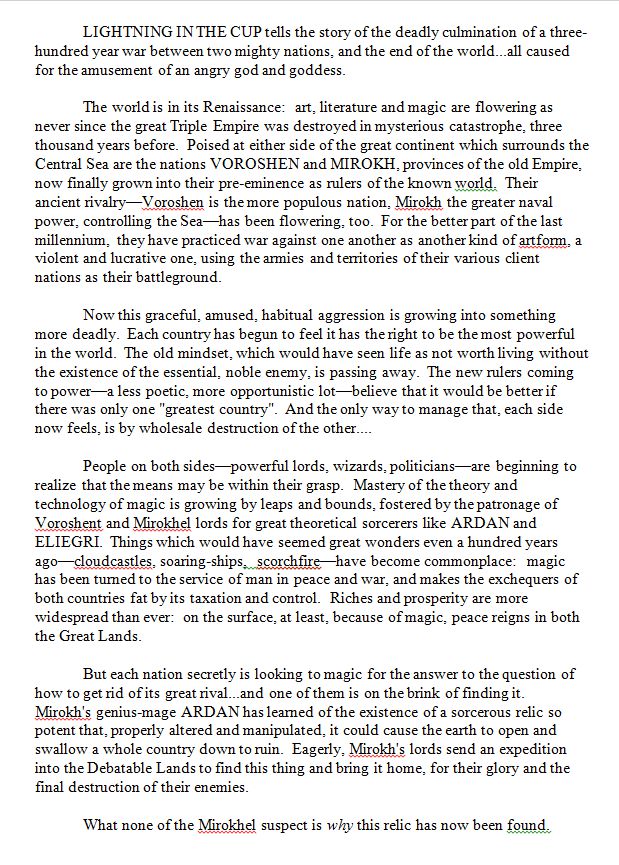 (here’s the text if the image gives you trouble)

LIGHTNING IN THE CUP tells the story of the deadly culmination of a three-hundred year war between two mighty nations, and the end of the world…all caused for the amusement of an angry god and goddess.

The world is in its Renaissance: art, literature and magic are flowering as never since the great Triple Empire was destroyed in mysterious catastrophe, three thousand years before. Poised at either side of the great continent which surrounds the Central Sea are the nations VOROSHEN and MIROKH, provinces of the old Empire, now finally grown into their pre-eminence as rulers of the known world. Their ancient rivalry—Voroshen is the more populous nation, Mirokh the greater naval power, controlling the Sea—has been flowering, too. For the better part of the last millennium, they have practiced war against one another as another kind of artform, a violent and lucrative one, using the armies and territories of their various client nations as their battleground.

Now this graceful, amused, habitual aggression is growing into something more deadly. Each country has begun to feel it has the right to be the most powerful in the world. The old mindset, which would have seen life as not worth living without the existence of the essential, noble enemy, is passing away. The new rulers coming to power—a less poetic, more opportunistic lot—believe that it would be better if there was only one “greatest country”. And the only way to manage that, each side now feels, is by wholesale destruction of the other….

People on both sides—powerful lords, wizards, politicians—are beginning to realize that the means may be within their grasp. Mastery of the theory and technology of magic is growing by leaps and bounds, fostered by the patronage of Voroshent and Mirokhel lords for great theoretical sorcerers like ARDAN and ELIEGRI. Things which would have seemed great wonders even a hundred years ago—cloudcastles, soaring-ships, scorchfire—have become commonplace: magic has been turned to the service of man in peace and war, and makes the exchequers of both countries fat by its taxation and control. Riches and prosperity are more widespread than ever: on the surface, at least, because of magic, peace reigns in both the Great Lands.

But each nation secretly is looking to magic for the answer to the question of how to get rid of its great rival…and one of them is on the brink of finding it. Mirokh’s genius-mage ARDAN has learned of the existence of a sorcerous relic so potent that, properly altered and manipulated, it could cause the earth to open and swallow a whole country down to ruin. Eagerly, Mirokh’s lords send an expedition into the Debatable Lands to find this thing and bring it home, for their glory and the final destruction of their enemies.

What none of the Mirokhel suspect is why this relic has now been found.

…And then things get interesting.

Note to self: import into Scrivener. Add to ToDoIst project list. Schedule for more research after completion of YW#11 draft. Possible scheduling: spring/summer 2018.

(sigh) Just what I needed before I’d even had my tea. Another novel.