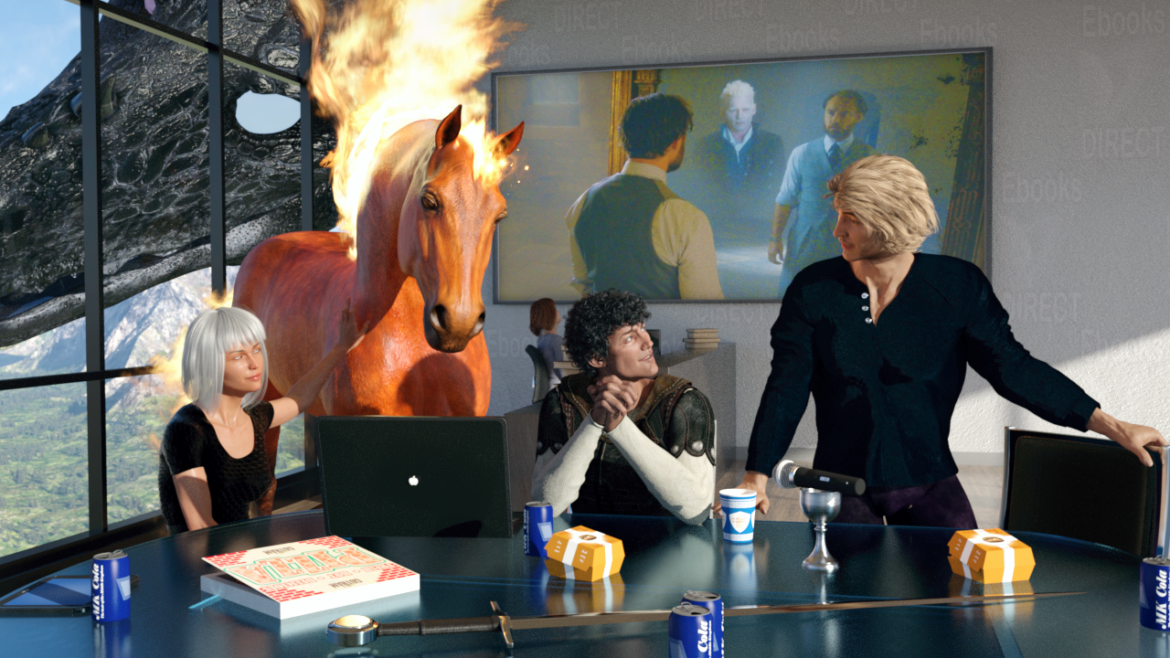 INTERVIEWER: …So the question going the rounds in the fictional-character or character-meta world right now is: Have you always been gay?

INTERVIEWER: That is, explicitly gay in canon instead of being declared so without actually displaying any indicators there.

FREELORN (dubious): He’s usually fairly cheerful. Except early in the morning, he’s not really a morning person. And as for her, better avoid the subject entirely.

INTERVIEWER: Have you always liked men?

HEREWISS: …At least since the late 2800s. My dad got me started.

SEGNBORA: The “like” usage’s a bit on the euphemistic side, wouldn’t you say?

SUNSPARK: I keep forgetting some of Herself’s people are so nervous about this. Must be dreadful for them.

HEREWISS: Well, it’s not ours to judge. ‘Sexually attracted’ to men? Yes, for quite a while. (smiles at Freelorn)

FREELORN: And here I thought our shouts of “WE’RE FUCKINNNNNG” in book 1 would have been a bit of a giveaway? Seems not.

HEREWISS: Though for me it’s hardly an exclusive preference. I’ve been known to break over in other directions. (glances at Segnbora & Sunspark: grins)  From time to time. When there were no other options.

SEGNBORA (to Sunspark: dry): Let’s toss for which of us makes him sleep on the couch tonight.

FREELORN (to Sunspark): Her coin’s loaded.

SEGNBORA: Of course it’s loaded. After all, I stole it from you.

INTERVIEWER: Uh, all right. (to Segnbora) And you?

SEGNBORA: Is it same-sex issues we’re concerned about here? Then yes. I ‘like’ women. In fact, in canon my first loved was a woman, and later on I married her, so that would seem to be some kind of an indicator.

FREELORN: And not just any woman!

HEREWISS: Come on now, she was Queen by then!

SEGNBORA (patient): It’s a trope, Dusty. Do keep up.

FREELORN: And you married a King, as well. (smirks)

SEGNBORA: As well as this delightful creature.

SUNSPARK: She does get it right more often than not.

SEGNBORA: And the one sitting on the roof.

HASAI: She is nothing if not generous with her time.

INTERVIEWER: Uh, all right, I, uh – thank you. And this was in what year?

INTERVIEWER: Sorry, what year in our world?

FREELORN: Oh Goddess, your calendars! Honestly, how do you cope?

SEGNBORA: You have to wonder. Half the months are different lengths. Herself told me the little poem they have to keep the lengths straight and I flat out did not believe her.

SEGNBORA: That was NOT when we got married! That was 1992.

INTERVIEWER: Something of a gap…

FREELORN: In our timeline she and I had only met three seasons before and had just found out we were going to be parents. Didn’t seem like that much of a gap to us.

HEREWISS: One of those relativity things Herself’s always going on about.

INTERVIEWER: So what you’re saying is that, in our world’s meta, you’ve all been openly gay for…

INYERVIEWER: That’s… quite a while.

HEREWISS: Look, if you’re hunting for a polite way to say that you think she could have been writing these faster, let me whisper in your ear: the opinion’s not exactly novel. But in any case, any further revelations about our sexualities would probably prove, um, redundant.

FREELORN: You could always ask him about his discovery of chocolate.

FREELORN: What he does is, he–

INTERVIEWER (to Sunspark: hastily) Sorry, I didn’t really give you a chance to answer. How about you?

SUNSPARK: All the ways. (grin) Are you spoken for? I can demonstrate.

INTERVIEWER: Uh, thanks, that’s as much as I… uh. Thanks. I’ll see myself out.

HEREWISS: Thank Herself that’s over with. Who’s the next one?

SEGNBORA: Oh Goddess, get some more booze in here, we’re going to need it.

SUNSPARK: And by the way, this time can you find some way to let them know you’re not actually married to a horse…?

(This post originally appeared on Tumblr and has been crossposted here for those who [understandably] don’t care for that platform’s data ToS.)

Writing and C. S. Lewis’s “Law of Undulations”: some thoughts