In the Writer Superstitions Dep’t: The Magic Pad 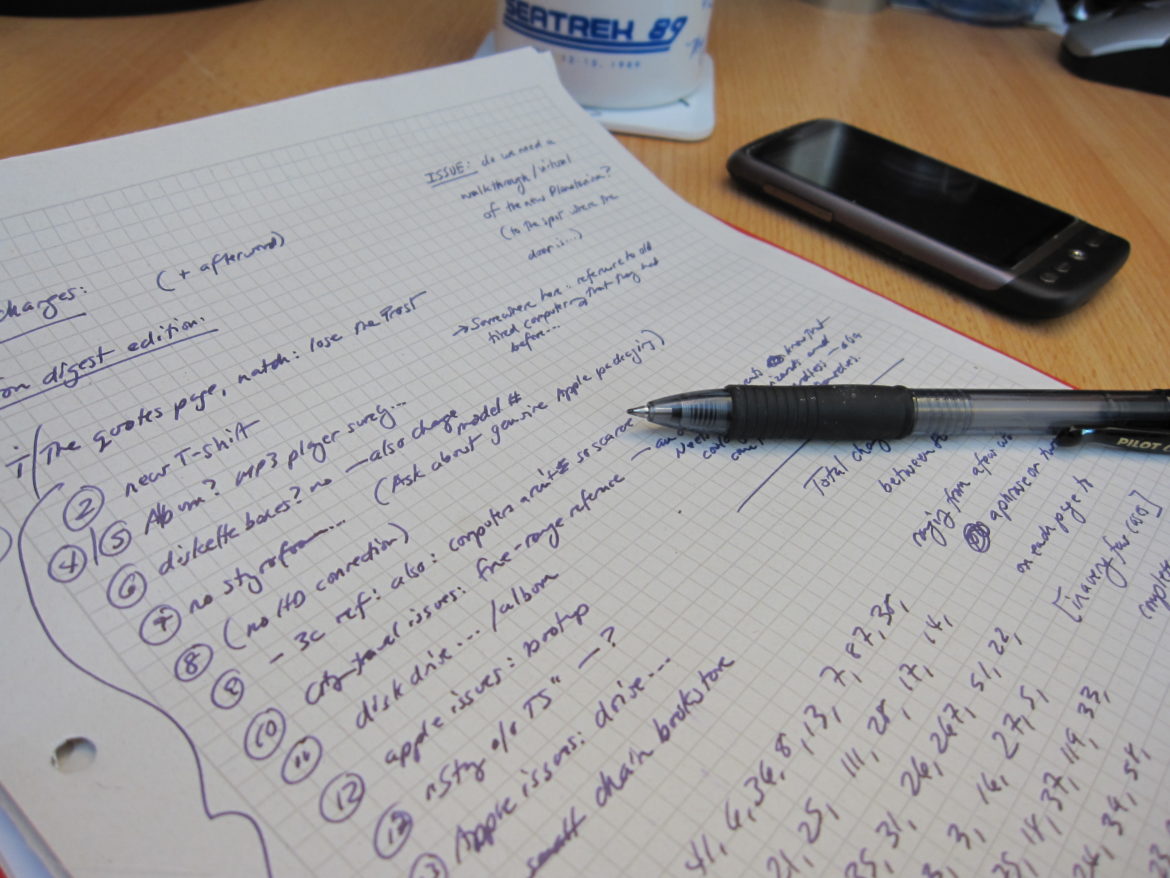 Almost all writers I know have work superstitions, though it’s not something we usually discuss except amongst ourselves. They’re like the superstitions some sportsmen have — the way, for example, that baseball players cross themselves when they’re coming up to bat. (Often provoking the response, Oh, come on now, you didn’t have to cross yourself so many times. And do you really have to touch yourself there right afterwards? How can your nethers need so much adjustment when you’ve hardly moved? And now you’re doing it again. I’m looking away now… )

For writers it can be any one of a number of things, or a combination of them. Which way the desk is oriented. How many cups of coffee you have to have before you can sit down and start work. A certain kind of pencil to scribble notes or doodles with. The right seat in the right cafe. Not starting work before a specific time. Not starting work after a specific time. Some of these habits just seem to begin themselves: some are a behavior or an accessory  that may have been sheerly accidental at the time, but which the writer has come to associate with work that just came out right.

This is mine: grid paper. Specifically, this grid paper from the Swiss supermarket/department store chain Migros. (Their online shopping partner LeShop.ch carries it as well.)

I’d have to do a little digging to nail down the exact date when this started, but it goes back at least to the late 1990s—not long before the Transcendent Pig started turning up in the YW books. (I’m pretty sure that the writing episode featuring the Pig that’s described here was conducted on Migros grid paper: “the pad” is mentioned, and before the Pad came along, it would have been just plain white printer paper.) In any case I was in Switzerland a lot during the 90’s— doing research for A Wind from the South, among other things—and since everybody who stays in Switzerland for any length of time winds up in a Migros sooner or later, it was probably a given that I would run across these pads eventually and pick one up.

But they’ve turned out to be really nice to work on. Reasons:

But most important of all for me:

Don’t ask me how or why. It just seems that way. So I don’t use it on just anything: no to-do lists, no shopping lists. (Those go on sticky notes, either real ones or the virtual ones in my smartphone. Though sometimes work notes do wind up on these due to accident or necessity, and those get stapled up over the desk so I don’t lose track of them. They are never removed until the line or issue mentioned on the note is dealt with in print. Some of these have been around for a while: see the image to the left.) The grid paper is saved for outlines, serious notes or edits (like the ones above, for the High Wizardry New Millennium Edition revision), hand-writing chapter excerpts (as detailed in that link above), and other such heavyweight stuff.

When somebody in the household goes over to CH (or these days, to Germany: there are some Migros outlets there now too), they’re always enjoined to bring a couple of pads back home with them. These go on the shelf by the desk where I can peel off a few sheets in a hurry if I need some at home, or else pack some in a bag with the red plastic writing clipboard if I’m going offsite.

So now everybody knows.

Whether this “magic” has the slightest chance of ever working for anyone else, I have no idea. These things are so subjective. The definition of superstitious behavior, after all, is that it assumes or attempts to create causal links where none really exist.

But who can tell. If it does someone else some good… cheers.

Something for the weekend: our new ebook store opens