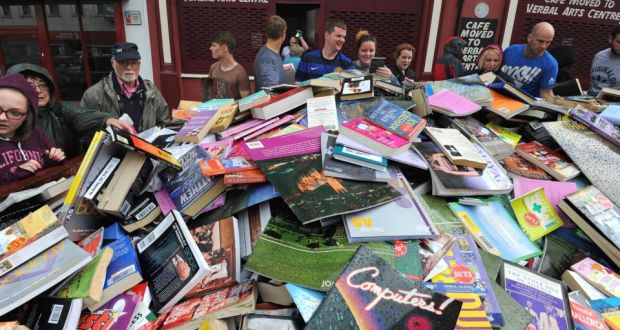 Almost 100,000 new books were dumped into a skip outside a Derry bookshop today after the receiver ordered that the contents of the shop, which closed two years ago, should be disposed of.

…As word quickly spread crowds descended on Bishop Street to avail of the book bonanza. Many motorists double parked causing temporary traffic jams as they helped themselves to dozens of the books.

Looking on as the skip was filled and re-filled with the books was Peter MacKenzie, the former joint owner of the Bookworm bookshop.

“The books were my assets which were seized. The building was also seized and now it has been for sale for the last two years with an asking price of £375,000.

“Four years ago the same building was valued at just over £2 million.

“It’s heartbreaking to see what was once my life’s work being dumped into a skip but at least the books are being grabbed by members of the public and fair play to them”, he said.

For Fairytale Friday: The Prince with the Three Fates