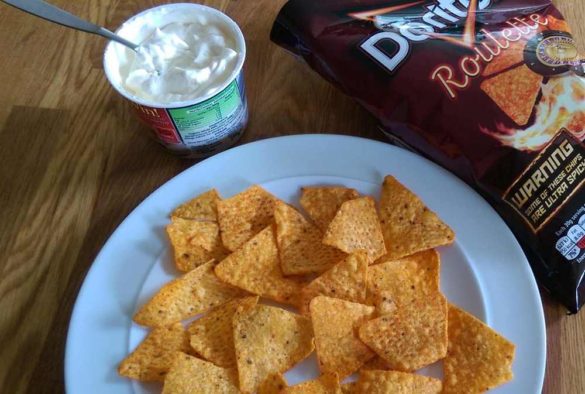 (First of all: is there some specific reason they used the Classic Star Trek font [or one very like it] for the warning panel on the bag? Is it somehow seen as “futuristic” to be afraid of chili heat? Just asking. But if so, I weep for my species.)

… It’s funny the things that can get your attention sometimes. At some point in the last couple of weeks, this post regarding someone who’d had a bad reaction to Doritos Roulette made its way across my Tumblr dashboard. I looked at the post and blinked a couple of times, said a couple of things under my breath about some of the more insensitive comments, and then went on with whatever I’d been doing.

But then, over the week that followed, it happened that I saw a couple of ads on TV for these chips, and I thought to myself, “Okay, now I’m curious. I’m a white girl; let’s see how I do with these.”

As background information for this experiment, it needs to be stated that we have two different kinds of “hot food people” in this house. As a New Yorker raised in the Metropolitan Area during a time when hot and spicy food was (for a suburban girl) harder to lay hands on for a good while, I got rapidly clued in in the 1970s, and developed a fair tolerance for heat in my food. Not huge, but fair. Six years in LA much improved this situation.

The other participant in this study is someone who, for a Belfast boy, stands out in having had a taste for the hot stuff that long precedes its now-widespread popularity in British mainstream culture. This is a man who has a whole shelf of hot sauces, and whose idea of what’s nice to put into a newly opened bag of crisps is one or more of the following:

(The two on the right are typical favorites that came from Oriental Emporium in Dublin until they stopped carrying it a few months back. The one on the left is something we picked up in passing in Austria in June, and originates apparently from a native Austrian company; causing Peter to remark, “Yet another reason to go back to Bregenz.”)

So your baseline here is two people one of whom has a significant tolerance for chili heat*, and one who has a mild tolerance but at the very least can be guaranteed not to faint dead away from shock at the taste of something spicy.

So, onward to the experiment.

We dumped about the third of the bag out onto a plate, as you see above. We were interested in doing visual examination first to see if there was any way to tell the doctored chips from the non-doctored ones. The company has been careful: visually, they are indistinguishable. Our guess is that all the chips are originally identical until a given number of them are separated out into a separate assembly line to be sprayed with chili extract.

PR stories about these chips indicate (per the company’s advisory) that the doctored ones have been sprayed with chili extract approaching the strength of a (mild) Scotch Bonnet / habanero chili at around 73,000 to 75,000 Scoville units (the not-mild ones can be double this, and they vary without warning). This is not exactly an entry-level strength. The average Jalapeño pepper clocks in at somewhere between 4000 and 7000 Scoville. To that end, I made sure that there was a tub of crème fraîche handy. This was for me and not for Peter. Habaneros generally are at the far upper end of my heat-tolerance ability, and I wanted to make sure that I had a fire extinguisher ready if it was needed. (As for Peter, even he has his limits. We have some Moruga Scorpions in the freezer in the moment, and he’s spent the last couple of months wondering what he can use them on/in that they won’t ruin. Too much heat is simply a waste of time.)

We proceeded by breaking chips in half and nibbling until we found hot ones, then exchanging them to see how hot they were—admittedly, a very subjective business—and how their heat persisted and built. There are some chili heats, after all, that flare quickly and die away quickly (like Tabasco), whereas others linger in your mouth and on your lips and tongue, and build—a cumulative heat. The hot chips in the Roulette bag have a cumulative heat, though not one that even by my standards would be tremendously strong. Both of us have over our time here had far hotter curries or chilies, and have drunk a lot of wine or eaten a lot of raita to to wrestle them down, but otherwise have suffered no ill effects.

Two interesting things immediately became apparent: (a) The heat is not consistent across the hot chips. Some, probably due to quirks in the manufacturing process, have been dosed harder than others. (b) There is some transference of the hot chili flavoring to non-hot chips. Peter and I both felt sure we were able to detect a difference in flavor between the ones that had been purposefully dosed with chili extract and the ones that had not. (Flavor is always an issue for us both in situations like this: we both like the heat, and sometimes both like it quite strong, but neither of us has any time for the witless application of pure extract-based heat without flavor.)  Some of you will recall the old packaged-food warning, “Contents may have settled during transport”. My guess is that during the production and shipping process for these chips, there’s a lot of rubbing and jostling, and some of the hot coating on the dosed chips rubs off and gets on some of the others.

With this in mind, it does bear pointing out that there was a fair amount of the usual colored dust in the bag that one gets used to seeing in brightly colored junk foods. One wants to consider how easy it would be to inhale some of that dust… and what the results might be if the stuff got down into your bronchi. Even when just chewing and swallowing the hot chips in the normal way, both of us were caught at the back of our throats by the heat of the chili extract, and there was some discreet coughing from each of us (significantly more from me) until we swallowed once or twice. That dust struck me as an immediate possible cause for the problems experienced by the unfortunate girl in the Sun news story. And seriously—mock an asthmatic for having trouble with that? And for possibly having a reaction on top of it, secondary to inhaled dust contaminated with straight chili extract? “Judge not lest ye too be judged.”

Anyway. Our conclusions: if you are a person comfortable with fairly spicy food, you can safely eat these, but you may still be surprised — so take precautions. If you are not able to handle capsaicin-based heat, you might want to steer clear of these: the hot chips may cause you trouble.

Hope this helps anyone who might have had questions. Me, I’m going to finish off my share of the bag now and leave the rest for Peter. But I’ve got the crème fraîche ready…

*It’s interesting to note in passing here that while Peter has very significant tolerance for chili heat, he has almost no tolerance for (or patience with)  the upward-rising horseradish-style heat of the kind you get with wasabi, hot English or Chinese mustard, or a good Jewish horseradish. When ingesting such, it is my pleasure to sit there and happily enjoy the sensation of my sinuses getting blasted clear while he runs around flailing and shrieking. Okay, maybe not shrieking so much. But flailing, yeah; and he turns all pink.