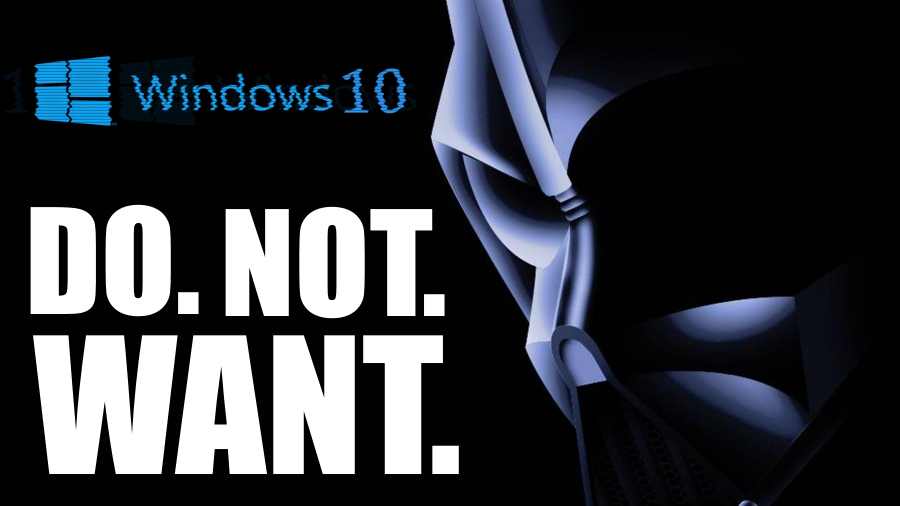 ETA: Thanks to those who set me straight on the non-mandatory side of the upgrade. I’ll take refuge in Rick’s excuse here: “I was misinformed.” As for the rest of it, the “download opportunity” still behaves like malware: you should be able to decline the download. Not allowing your users to make the choice themselves is abysmally bad practice.

I don’t often get stirred up enough to go into full-blown editorial mode, but today is one of the days when that seems to be happening.

A lot of you who have Windows 7 or Windows 8 machines will have noticed the appearance, earlier in the month, of a little white Windows logo in your system tray. This, when you click on it, munificently offers you a free upgrade to Windows 10. Those of you who have experimented with the thing will probably have noticed there is no way to get rid of the impending update download — or at least, no obvious way. And that it starts rolling out tomorrow, July 29th.

For those of you who do not want the 3-gig download and would like to turn it off, let me point you at this webpage:

How To Remove The Windows 10 GMX upgrade nonsense

This cranky and civic-minded person has laid out, step-by-step, a method by which you can get rid of that pestilent little icon in your tray and stop the unavoidable downloading and implementation of three gigabytes of material you don’t want and have no intention of using.

Don’t get me wrong, here. I understand perfectly well Microsoft’s rationale behind this, or at least their stated rationale; to keep security upgrades consistent across all the installs of their new OS. That said, rolling it out in this particular way is really unsavory. It smacks of the behavior of malware installers, rather than that of any responsible company with any kind of interest in keeping its customers on board.*

(Also, it’s worth noting in this context that many people who have already updated to 10 — particularly users with Nvidia graphics cards — have been reporting horrific driver problems with the new Windows version, secondary to this ill-thought-out policy of “you’ll take what we give you and you’ll like it”. Only just now has the beginnings of a fix for this particular problem begun to propagate, but this strikes me as a sign of more bad things to come, a slow-motion trainwreck better watched from outside it than inside.)

Now who knows, over the course of the next six months or so, when I get ready to build my new desktop machine, I may indeed go for Windows 10 — once I’ve had time to make the choice, the informed decision, as to whether it’s right for me, and whether I can find alternatives to the various programs whose function I like and would like to keep. Or who knows? Maybe I’ll go whole hog and just switch over to Apple. (I know a lot of you who’re Young Wizards fans, considering the frequent appearance of hardware with the Biteless Apple on it in the books, will be surprised that this is an issue for me at all. However, in this as in many other parts of my tech life, I am an amphibian and have for a long time worked happily on more than one side of the divide at the same time. But this present behavior of Microsoft’s is trying my patience way more than usual.)

Anyway, I’ve used the method detailed in the webpage above on my present Win7 desktop, and it seems to work perfectly. I strongly recommend that if you are ambivalent about the prospect of this forced update of your software, you go over there and have a look at it and decide whether it’s an option you’d like to avail of.

*I also understand that in recent online talks, Microsoft upper-level management have let it be known that people who find ways of avoiding this upgrade will eventually be cut off from normal product updates. And you know what? I can think of no quicker way for them to drive me straight into what Euripides called “the apple-laden land.” Yeah, there’s just one of me, and I doubt my loss is going to break Microsoft’s corporate heart. (shrug) No matter.

How refreshing. Not a single cellphone in sight. People just happily living in the moment.

We are seeking lovely KP’s for all 3 places,lots of 9-5 positions, lovely atmosphere & chefs who respect & train to allow for progression

Sure I started as a KP so understand the hard work that goes alongside and we respect and reward that, many of our KP’s have become chefs