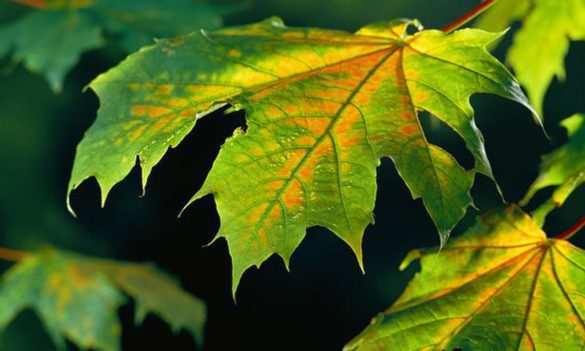 This is about when it begins to happen.

The first part of October can be surprisingly dulcet in lreland, seeming more like an extension of September than anything else. The weather doesn’t often oblige with prolonged, still, modestly-warm periods of the “Indian summer” type, but at least it tends to settle a bit. Later in the month, though, comes the shift, when you know the true autumn is upon you.

Here are five ways to tell autumn has genuinely (in its sneaky way) arrived in the countryside here.

I should say “neighbours”, really, in this instance. And “colours”. And you know what? They’re okay. (Meaning the colours. The neighbours are far better than okay: they’re brilliant.) But for those of us who come from places with hard winters, the colors are kind of… meh.

The problem comes in two parts: the local flora and the local climate. Even now, with climate change way too well in progress, Ireland hasn’t historically run to cold winters: the Jet Stream has seen to that. (When it’s been where it’s supposed to be, that is, at least judging in terms of the behavior of the last half a millennium or so. And don’t start with me right now if you’re one of those “The recent climate is a blip” people: just go have that conversation somewhere else if you’d be so kind.)

I say no more than necessary here of the godawful winters of 2011 and 2012, which dumped feet of snow all over everything (our little road never did get plowed in 2011, and thank God for our neighbors who would run us down to the shops or bring heating oil up for us in jerrycans to make sure our central wouldn’t conk out, because the fuel trucks couldn’t make it up the hill through the snow) and killed damn near every palm tree in the country. But those would be the serious exception to the rule, and the rule is: mild wet winters with temperatures that only rarely fall below freezing, even here on the high ground, and even then only for short periods.

Which brings us to the flora. Around here we’re short on the kinds of trees that develop great color. No maples here (though we have quite a lot of sycamore (the species is invasive, and has crowded out some of the trees that used to be more prevalent). Most of the rest of what we’ve got locally is oak and beech — a lot of beech. So the available colors are pretty much brown and yellow, with a bit of soft orange. And since what it takes to trigger the leaf chemistry that develops into dramatic autumn color is relatively cold weather, drama is pretty much what Irish autumn color lacks in a normal year. It’s nothing like the eye-vibrating yellows and reds that you can get on the East Coast of the US in autumn, even in the suburbs.

So our neighbors’ cries of delight leave me a little underwhelmed. After a few decades of practice I now find it possible to not immediately segue into mutters of “Are you kidding, this is nothing on Vermont, or even the Catskills…” and so on. But it’s a trial.

Well, this too will pass. And I’m not speaking figuratively, as in places up here the leaves are already saying “The hell with this, I’m done” and coming off the trees almost before they’re finishing acquiring what modest color they’re going to get. (Peter’s line is that there are only sixty days in a year when the beech trees surrounding us are not dropping their leaves. Sometimes I think he has a point.)

(4) Waking up the central heating

You wake up in the morning to find that too-familiar condensation inside those windows in the house that aren’t double-glazed, and say, “Uh oh. Time to turn it on…” For much of the year (in recent years) it seemed like sort of a game to see how long you could go without needing the central. Then fuel prices dropped and there was just a shade less virtue in gritting your teeth and Not Using Up The Oil. Now, though, you start doing calculations of whether you want to get the guys up for a delivery, or wait a bit longer and pay some other bill instead. The Lesser Calculus of Climate…

Even with a good heavy duvet and a warm husband/wife/other, feet can get surprisingly cold without warning, these nights (especially when #4 hasn’t yet shifted to “oh go ahead, turn it on for a bit”). Or maybe you just run to cold feet normally, and taking the easy way out and shoving them up against a nice warm bit of your nice warm partner is not, um, particularly appreciated. So: time for the bed socks.

And then you go searching for them. But where the hell are they? You want the good ones, the soft fluffy ones that came from Marks & Spencer. Except they’re black, like an alarming amount of other clothing around this household, and therefore God Herself only knows where they are in a closet that’s full of black things already. And the ones you do find are those crap thermal socks from last year, the ones that were OK until you washed them. And they’re hot pink. Oh God what possessed you. “Where are the Marks ones!” the cry goes up. And Echo answereth not. Maybe you’ll find them by spring. Wait, is this a black one? Oh no, wait, it’s one of those ones with the rubber nonslip ribbing on the soles. And anyway, there’s only one of them; the other is missing. (And the rubber is hot pink. What were you thinking? Another question for the ages.)

Finally you just put on whatever you can find. Because, seriously, no one in their right mind would walk barefoot on the tiles in the kitchen, the way they’re feeling at the moment. And it’s only going to get worse.

(2) The sweaters / jumpers / pullies come out

In the Spring you folded them up and shoved them right to the back of the drawers / closet shelves. But now, especially if the conditions mentioned in #4 remain as yet unaltered, they’re starting to look awfully good. And admit it, when you were in town the other day you looked in the store windows in Grafton Street and began to lust after some of the sweaters you saw there. Not to mention the cashmere in the Hermès boutique in Brown Thomas. Insanity even to think of it at those prices, but it looked so lush. (Never mind. The wannabe-cashmere from Marks is still quite nice. In fact, you have some of that. Go put it on right now and then go on downstairs and make some tea.)

And finally and possibly most diagnostic of all around here:

Summer in Ireland is when you don’t have to microwave the butter after it’s been out on the counter all night.

But summer routinely doesn’t last long. And eventually one morning you realize that the toast would get torn to shreds by butter in the consistency it has at the moment. That’s when you know: Yes, autumn is truly here.

Ten seconds is about right for our present microwave. (Our old fan oven-microwave would let us do five, but alas it hasn’t been replaced as yet.) …At least you know by now how long it needs to hit that magic point between not-quite-enough-to-spread-yet and WHOOPS, okay, I’ll make some pasta con aglio-olio-e-peperoncini and pour this in it.

…And now you can butter your toast, and sit down and have your tea, and think about whether or not you really want to turn on the central.