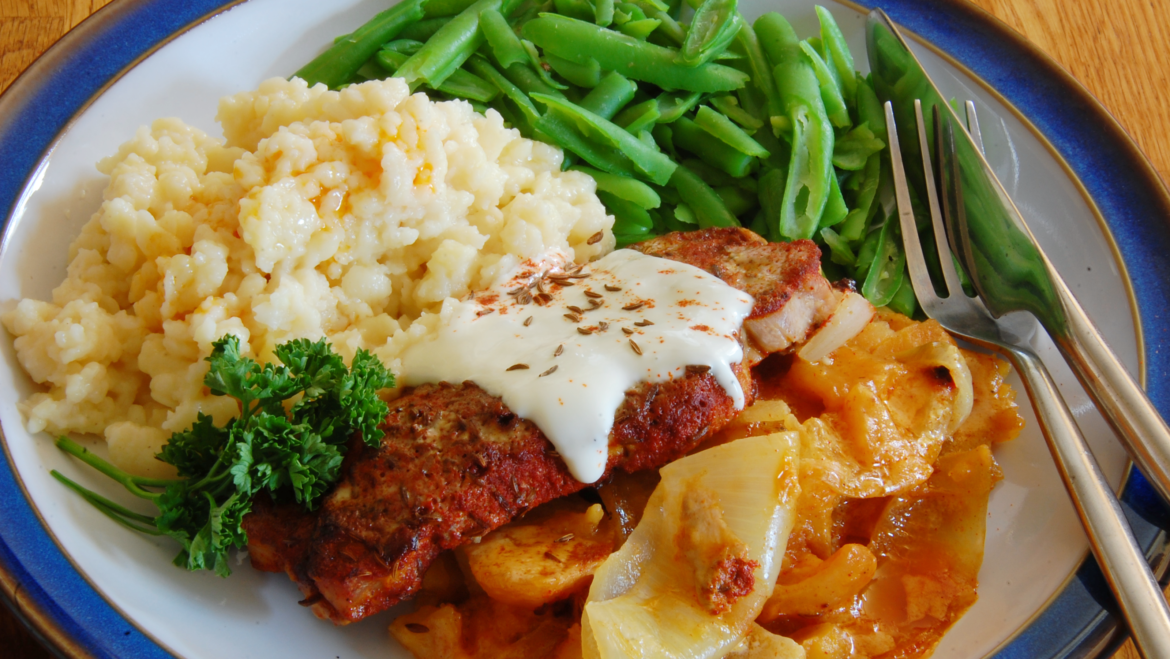 Every now and then, in the work surrounding the slow retooling of the EuropeanCuisines.com website, I wind up doing some casual detective work to try to find the source of a recipe that, though I’d like to include it, just doesn’t feel… right somehow. This week’s case is a recipe that’s labeled “Hungarian”, but isn’t a genuine traditional recipe. It’s nice, though, and a good supper dish or easy-to-throw-together entree, so it’s worth keeping around and sharing even if I can’t put it on EC.com as a true product of its purported culture.

Backstory: The site’s previous image for our tarhonya recipe was crap, and I wanted to reshoot it. So this we did. But a bowlful of plain pasta isn’t all that interesting: I preferred to show it plated up as a side. As it happens, there were a couple of pork cutlets in the fridge… so (with an eye to the gradual approach of dinnertime) I went looking for some Hungarian recipe in which to use them, but came up empty. In fact I couldn’t find anything Hungarian that was pork-cutlet-oriented except for one recipe that made me suspicious by its rarity. It appears in an eating-for-one cookbook by the redoubtable Delia Smith.

In the back of my mind as I looked the recipe over was the thought that probably every cuisine has ingredients that are used so frequently that a casual observer would be tempted to automatically associate them with it when used in combination. That looks like what’s happened here, as the only Hungarian thing about this recipe is that it uses paprika, caraway and sour cream together. So I’m tempted to think that Delia either invented this, or had something like it elsewhere and decided to publish the recipe with the “Hungarian” label.

Delia’s version in the One Is Fun cookbook calls for the cooking to be done in a roasting tin. Since it involves preheating the cooking fat/oil, this struck me as a great way to cover the inside of the oven with a lot of spattering that would need cleaning up after. So—besides altering amounts so that this recipe works for two people instead of one—I did it in a lidded casserole. I think this works better because it also helps the pork stay a little moister/juicier than otherwise: not a bad idea if you’re working with pork that’s fairly lean.

Preheat the oven to 375 degrees F / 180C. Find a heavy lidded casserole and put it (without the lid) n the oven to preheat along with it.

Peel and slice the potatoes: peel and slice/halve the onions. If you (like me) suffer from Onions Make Me Cry syndrome, do yourself a favor before you start work on this recipe and stick the onions in the freezer for twenty minutes or half an hour. This lowers the vapor pressure of the gas they’ll release when you cut them, and gives you a fighting chance to get the work done before the gas warfare starts to impair your functioning.

On a plate or in a shallow bowl, combine the paprika, caraway seeds, and some salt and pepper. Dry your pork steak or cutlets off with paper towels and press each side of the cutlets or pork steak into the spice mixture to coat them.

When the oven’s ready, remove your casserole, pour in the oil or fat you’re going to be using (give the lard a moment to melt if you haven’t already melted it in the microwave) and arrange the sliced onions in the casserole; then add the sliced potatoes. Snug those two half pieces of onion down into this business, and perch the pork on top of them. (This stratagem holds the meat a little out of the cooking juices and helps those juices rise up and steam the bottom of it.)

Top the piece(s) of meat with the butter, give everything another grind or so of pepper, and sprinkle the remaining spice-coating mixture over the meat and the layers of potato and onion. Sock the casserole into the oven and bake for 30 minutes.

At this point, pull the casserole out of the oven and pour the sour cream over the meat; then return the casserole to the oven, lidded again. Bake for another fifteen minutes.

And that’s it! Get it out of the oven and serve it forth. If you feel inclined, garnish the servings with a little more sour cream and paprika, and a sprinkle of caraway.

At the Ebooks Direct store: everything 50% off till Whenever