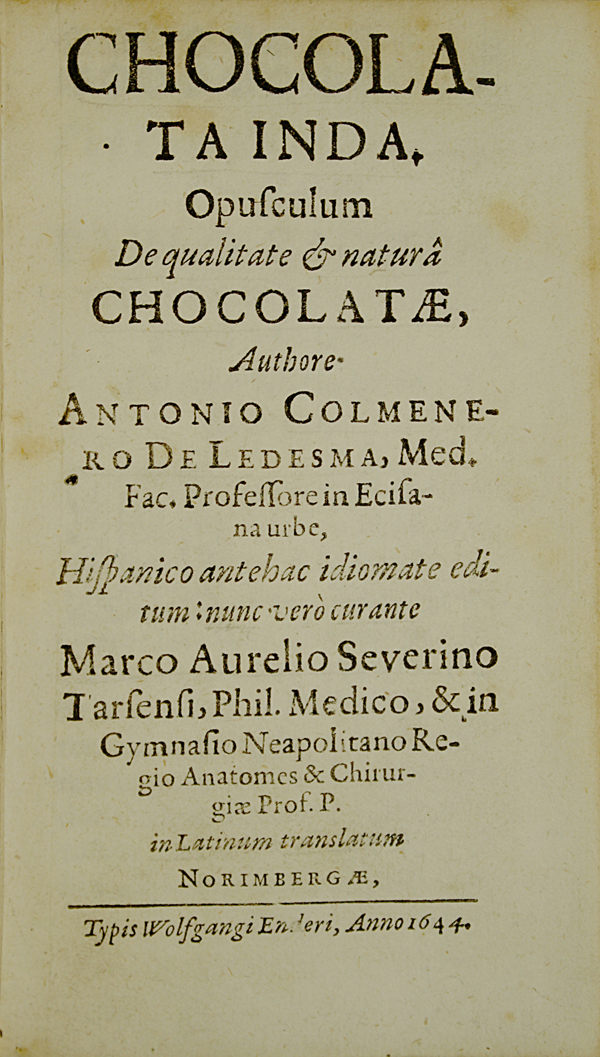 The following material is posted here purely for research purposes. (Yeah, everybody’s going to believe that.)

So I really like my chocolate. Well, this would hardly be news to anybody who reads my work, since it keeps popping up. (And believe it or not, no, the constant recurrences of Switzerland in my work have nothing to do with this. That’s a separate kink, a geographical and historical one. A coincidence, seriously.)

Anyway, the history of this unique substance has always interested me. but it wasn’t until very recently that I found out about the document reproduced below: a happy 17th-century combination of alchemical/pharmaceutical tract and shameless advertisement for a hot new fad food.  (Those familiar with the food-as-medicine school of thought will find this interesting reading, though maybe this comes at the theme backwards and is more medicine-as-food.)

Chocolata Inda (or sometimes the title comes up as Inda Chocolata, depending on which edition you’vegot) was written first in Spanish by one Antonio Colmenero de Ledesma, a physician to the Spanish court. There doesn’t seem to be a ton of information available about the man or his career, except that he was Andalusian and had previously published several works of materia medica (notably a work called Apologia chirurgica) before turning his hand to the chocolate end of things.

There seems also to be no indication of what made him do it, or what his affiliation might have been to the explorers or merchants who first brought chocolate to Spain from the New World. In any case, he was the first to write about the new wonder food. And he doesn’t mince his words. To hear Dr. Colmener tell it, the chocolate bean will cure just about everything that ails you. Particularly, though, he recommends it for male and female genitourinary health… with the emphasis on the “genito-“. And especially on the female end of things. Apparently it’ll put right about anything wrong with a woman’s nethers that can go wrong.

The title page of the English-language translation will give you a hint.

CHOCOLATE:
OR,
An Indian Drinke.

By the wise and Moderate use whereof,
Health is preserved, Sicknesse
Diverted, and Cured, especially the
Plague of the Guts; vulgarly called
The New Disease; Fluxes, Consumptions,
& Coughs of the Lungs, with sundry
other desperate Diseases. By it
also, Conception is Caused,
the Birth Hastened and
facilitated, Beauty
Gain’d and continued.

Written Originally in Spanish, by Antonio Colmenero
of Ledesma, Doctor in Physicke,
and faithfully rendred in the English,

LONDON,
Printed by J. G. for Iohn Dakins, dwelling
neare the Vine Taverne in Holborne,
where this Tract, together with the
Chocolate it selfe, may be had at
reasonable rates. 1652

…So now you know where you can get the stuff as well.  Isn’t that convenient?  … And now a word from our sponsor.  Sorry, sorry, our doctor.

The Confection it selfe, consists of severall Ingredients according to the different Constitutions of those that use it: the Principall of which is called Cacao, [a kind of Nut, or kernell, bigger then a great Almond, which growes upon a tree called the Tree of Cacao] containing in it the Quality of the Foure Elements, as will appeare in the following Discourse.

The vertues thereof are no lesse various, then Admirable. For, besides that it preserves Health, and makes such as drink it often, Fat, and Corpulent, faire and Amiable, it vehemently Incites to Venus, and causeth Conception in women, hastens and facilitates their Delivery: It is an excellent help to Digestion, it cures Consumptions, and the Cough of the Lungs, the New Disease, or Plague of the Guts, and other Fluxes, the Green Sicknesse, Jaundise, and all manner of Inflamations, Opilations, and Obstructions. It quite takes away the Morphew, Cleanseth the Teeth, and sweetneth the Breath, Provokes Urine, Cures the Stone, and strangury, Expells Poison, and preserves from all infectious Diseases.

But I shall not assume to enumerate all the vertues of this Confection: for that were Impossible, every day producing New and Admirable effects in such as drinke it: I shall rather referre to the Testimony of those Noble Personages who are known constantly to use and receive constant and manifold benefits by it, having hereby no other Aime then the Generall good of this Common-wealth (whereof I am a Faithfull Member)

Then we get a preface from our British translator. He’s a hoot. He is very, very convinced, is Captain Wadsworth (or he’s on commission). He even writes a Poem in Praise of Divine Chocolate. He spends a little while dissing other schools of medical thought, and then gets down to business.

THE TRANSLATOR,
To every Individuall Man,
and Woman, Learn’d, or unlearn’d,
Honest, or Dishonest: In the
due Praise of Divine
CHOCOLATE.

Doctors lay by your Irksome Books
And all ye Petty-Fogging Rookes
Leave Quacking; and Enucleate
The vertues of our Chocolate.

Let th’ Universall Medicine
(Made up of Dead-mens Bones and Skin,)
Be henceforth Illegitimate,
And yeild to Soveraigne-Chocolate.

Let Bawdy-Baths be us’d no more;
Nor Smoaky-Stoves but by the whore
Of Babilon: since Happy-Fate
Hath Blessed us with Chocolate.

Let old Punctæus Greaze his shooes
With his Mock-Balsome: and Abuse
No more the World: But Meditate
The Excellence of Chocolate.

Let Doctor Trigg (who so Excells)
No longer Trudge to Westwood-Wells:
For though that water Expurgate,
’Tis but the Dreggs of Chocolate.

Let all the Paracelsian Crew
Who can Extract Christian from Jew;
Or out of Monarchy, A State,
Breake àll their Stills for Chocolate.

Tell us no more of Weapon-Salve,
But rather Doome us to a Grave:
For sure our wounds will Ulcerate,
Unlesse they’re wash’d with Chocolate.

The Thriving Saint, who will not come
Within a Sack-Shop’s Bowzing-Roome
(His Spirit to Exhilerate)
Drinkes Bowles (at home) of Chocolate.

His Spouse when she (Brimfull of Sense)
Doth want her due Benevolence,
And Babes of Grace would Propagate,
Is alwayes Sipping Chocolate…

…It goes on like that for a while. But ah yes, the babes (and not just in the older sense of the word): let’s not forget what this magic stuff does for them.

The Nut-Browne-Lasses of the Land
Whom Nature vayl’d in Face and Hand,
Are quickly Beauties of High-Rate,
By one small Draught of Chocolate.

’Twill make Old women Young and Fresh;
Create New-Motions of the Flesh,
And cause them long for you know what,
If they but Tast of Chocolate.

Leaving aside for the moment the fascinating way this poem handles the various ongoing 17th-century vowel shifts: Shut up and take my money.

Then come the testimonials. They sound about the way you expect they would:  famous person says “Yes, I tried this, very impressive” in such a way as to not get in trouble later when something goes wrong.

After that we get a prolonged and doubtless very educational discussion of the qualities and virtues (oh, all right, “vertues” ) of the warm spices as compared to this new entry into the medico-culinary arsenal: all very Culpeperish. Nick would have eaten it up.

It may Philosophically be objected, in this manner: Two contrary Qualities, and Disagreeing, cannot be in gradu intenso, in one and the same Subject: Cacao is cold and drie, in predominency: Therefore, it cannot have the qualities contrary to those; which are Heat, and Moysture. The first Proposition is most certaine, and grounded upon good Philosophy: The second is consented unto, by all: The third, which is the Conclusion, is regular.

It cannot be denyed, but that the Argument is very strong, and these reasons being considered by him of Marchena, have made him affirme, that Chocolate is Obstructive; it seeming to be contrary to Philosophy, that in it there should be found Heat and Moysture, in gradu intenso; and to be so likewise in Cold and Dry.

To this, there are two things to be answered: One, that he never saw the experience of drawing out the Butter, which I have done; and that when the Chocolate is made without adding any thing to the dryed Powder, which is incorporated, onely by beating it well together, and is united, and made into a Paste, which is a signe, that there is a moist, and glutinous part, which, of necessity, must correspond with the Element of Aire.

No question whatsoever. Moving right along: we then are treated to several ways to compound chocolate as a drug, with a lot more about the Humours and so forth tucked in here and there. And then, finally, comes the layman’s recipe: which isn’t bad at all.

The manner of making Chocolate.

Set a Pot of Conduit Water over the fire untill it boiles, then to every person that is to drink, put an ounce of Chocolate, with as much Sugar into another Pot; wherein you must poure a pint of the said boiling Water, and therein mingle the Chocolate and the Sugar, with the instrument called El Molinillo, untill it be thoroughly incorporated: which done, poure in as many halfe pints of the said Water as there be ounces of Chocolate, and if you please, you may put in one or two yelks of fresh Eggs, which must be beaten untill they froth very much; the hotter it is drunke, the better it is, being cold it may doe harme. You may likewise put in a slice of white bred or Bisquet, and eate that with the Chocolate. The newer and fresher made it is, the more benefit you shall finde by it; that which comes from forreigne parts, and is stale, is not so good as that which is made here.

…So there you have it.

The whole document is at Project Gutenberg:  it’s worth a read.

Meanwhile, here’s  the lovely title page from the Nuremberg edition, in which the original Spanish has been translated into Latin. (I really think the Latin version of the title gains something absent from “Chocolate: or, an Indian Drinke,” though that has its own charms.) There are copies at the University Library of Eichstaett- Ingolstadt and at the City and State Library of Augsburg. Master listing at Gateway-Bayern here.) And just think, you an buy a copy in its original vellum wrapper, here. For  €7500. Thread. Because, seriously... this guy. Just amazing, for *many* wildly-assorted values of the word.

By-election day in #TivertonandHoniton , so let me tell about their former MP, who was once one of the most famous people in England, a national hero, a disgraced fraudster, and an astonishingly accomplished piratical maniac.

He had quite a life.

He lived long enough to be photographed, and died aged 84 during surgery.

He is buried in Westminster Abbey, a location which means, unlike Nelson, not a single pigeon gets to shit on him.

And to this day the Chilean Navy holds an annual wreath-laying ceremony at his grave.

“Death to dictator!
We don’t want the Islamic Republic!”

Protesters were out in #Tehran tonight to make their voices heard.